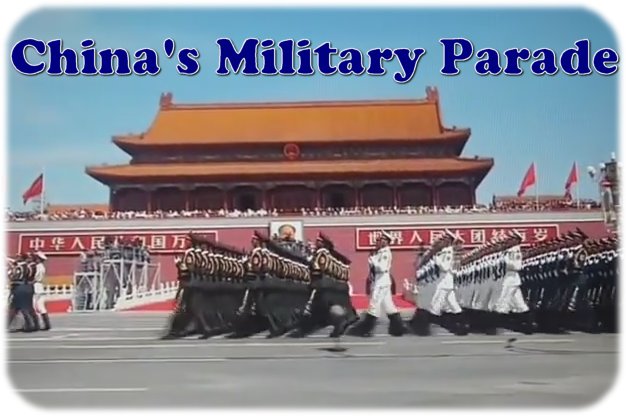 Perhaps you have seen the media coverage and photographs of the massive Chinese military parade that was held to commemorate the 70th anniversary of the end of World War II in the Pacific Theater and which also showcased large numbers of new types of modern Chinese weaponry. I’ve watched the media coverage of this event on the BBC-TV (aired on the USA’s PBS channel on September 2, 2015) and on Al Jazerra America. I found these coverages of the event to be far better than anything done by the USA’s mainstream media that I’ve seen. While the coverage I saw on the programs on the above networks was more extensive than in these links, I’ve included the first link and second link to give a sampling of a more balanced coverage of this military display. The third link includes a large pictorial of the troops, warplanes and weaponry displayed by China in its military parade.

The first two links note that China displayed a large number of new armored vehicles and types of military equipment for the first time anywhere. This was obviously meant to intimidate other nations. No linguistic “spinning” of the event can soften the bluntness of that message. Reportedly, the Chinese parade included approximately 12,000 troops, 200 warplanes and 500 tanks. About 1,000 foreign troops also participated in the parade. Various media reports showed Russian Prime Minister Vladimir Putin was there along with a detachment of Russian troops in the parade. An Al Jazerra America broadcast I watched this morning on my cable TV channel also reported that troops from Central Asian nations were included in the parade and it also showed Pakistani troops joining the Chinese troops in this parade (more on these nations’ presence later in this post).

The BBC broadcast included many types of impressive new Chinese army vehicles, including main battle tanks, what appeared to be an amphibious tank formation, missile-launching vehicles, armored air defense vehicles, armored assault vehicles, etc. I think I also caught a glimpse of the Chinese wheeled, light tanks which can be transported great distances via large Russian transport aircraft. Chinese warplanes escorted a Chinese version of an aerial AWACS plane. It was a very impressive display. Some of the goose-stepping military units were very reminiscent of Hitler’s goose-stepping army that paraded in similar military parades in Germany in the 1930s just before he launched World War II. I hope I’m not the only one who finds this obvious parallel ominous.

China’s premier announced that he was cutting China’s army by 300,000 troops, but as the BBC report that I watched on TV reported, China is mostly just cutting obsolete army groups in order to pour more money into building a larger navy and air force. The downsized Chinese army will soon outnumber the American army perhaps by “only” a 5-1 margin. I find no comfort in this.

There was another aspect to China’s military activities on its “Parade” day. The fourth link reports that China sent a naval flotilla to sail in the Bering Sea–which includes the very short distance between Russia and Alaska at that northern point where Russian soil almost touches American soil. The flotilla included three warships, an amphibious assault ship and a naval supply ship. I highly doubt that the first-ever sortie by a Chinese naval task force right off America’s Alaskan shore was coincidentally timed to coincide with the huge military parade in China and while President Obama was visiting Alaska. This was a provocative display of naval power off an American coast, in the aftermath of Russian-Chinese naval exercises just off Japan’s coast, another set of naval maneuvers just off NATO’s southern borders in the Mediterranean Sea and the building of a Chinese military base on an artificial island in the South China Sea. The message China is sending is clear: We are the “big dog” on the global scene, we are preparing for war, we are ready to carry the fight to your borders and we are building the weaponry to do so.

Let’s consider the nations that sent troops to the Chinese display of military muscle. There were troops from China, Russia, the Central Asian (-stan nations) and Pakistan. In other words, this was a display of military solidarity by nations within the Gog-Magog alliance that was prophesied in Ezekiel 38:2-6 to come into existence in the “latter days” of our age, and which will attack the USA, NATO and all their global allies at the very end of our age. In my writings and messages for well over a decade (many can be heard at the “speeches” tab at the top of my website’s homepage), I have predicted, based on Ezekiel 38, that all these nations will be in the Gog-Magog alliance. Iran is in it as well, but no media story mentioned if the Iranians participated in this Chinese display of force. I have also predicted, based on Ezekiel 38:15 and Joel 2:20, that this Gog-Magog attack will hit the USA and Canada from the north (i.e. through Alaska). It is only logical that, in preparation for a future such attack, the Russian and Chinese navies will make preliminary reconnaissance missions to the regions to which they will eventually be deployed when the prophesied Gog-Magog attack occurs. At the rate President Obama is downsizing the US military and trying to strip it of some of its best weaponry (such as the A-10), it won’t be hard in the future for Russian and Chinese forces to suddenly seize a variety of airports and seaports in Alaska into which they will surge a 24/7 air-lift and sea-lift of military forces when this attack occurs. Russian and Chinese naval and air units will be deployed to protect this invasion route’s corridors from American counter-attacks.

Everything that is developing in global geopolitics is happening exactly as one would expect for Ezekiel 38-39’s attack vs. North America (and Europe) to be fulfilled in a future year. A recent post examined China’s plan to retrofit “1000s” of civilian ships so they can be quickly transferred to military usage in the future–a development I predicted over a decade ago–again, based on Ezekiel 38-39, Joel 2 and other prophecies–not some personal revelation. Indeed, the Chinese-Russian plans to attack America have already been proclaimed openly by Chinese generals! One doesn’t even need the Bible to see the Russian-Chinese invasion plans developing. An invasion route through Alaska is the obvious choice for such an attack. Just looking at the globe makes this obvious. All one needs to see it is an open mind and some common sense–characteristics totally lacking in the current American/Western leadership who collectively have their heads stuck firmly in the sand so they cannot see what is obviously happening on the world scene. The western powers all had the same denials firmly in place in the 1930’s when Hitler was rising to power, building and parading his military forces and starting to gobble up pieces of land before the all-out invasion took place. Today, Russia and China are doing the same thing that Hitler did. Their militaries are being rapidly built up, they are parading their new power, and they are gobbling up tracts of land in advance of the big war. Hitler gobbled up Austria and the Sudetenland of Czechoslovakia. Russia recently gobbled up the Crimea and is seizing control of parts of Eastern Ukraine. China is seeking to seize the entire South China Sea. Solomon was right when he wrote in Ecclesiastes 1:9 that history regularly repeats itself.