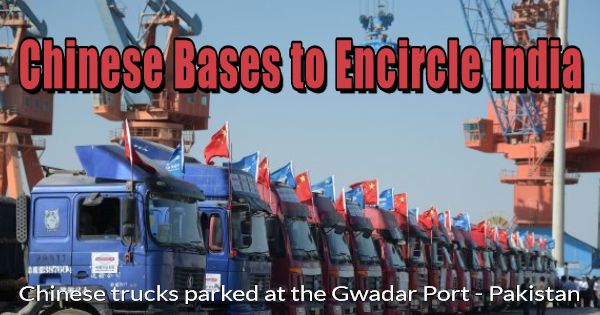 The “Indian Ocean” is, obviously, named after the nation of India, which geographically dominates the region. China is establishing a series of bases to effectively encircle India, and these Chinese bases can be militarized easily, even as China’s artificial islands in the South China Sea were militarized soon after China constructed them. The first link documents a series of Chinese bases that are either already in existence or in the process of being established. China’s policy of isolating India via a linked series of Chinese bases that can be quickly militarized is called China’s “string of pearls” policy. The first link names and describes Chinese bases in Myanmar, Sri Lanka, Pakistan, Tanzania, Djibouti, and Mauritius. China’s militarily base is already established in Djibouti, a strategic location that controls the southern approaches to the Suez Canal (which means Egypt is also targeted by China’s plans). China has financed the construction of a huge base at Gwadar, Pakistan which can be easily converted to a military base in the future. An excellent analysis of the Chinese-Pakistani alliance and how the Gwadar base fits into China’s plan “to encircle India” is found in the second link. The second link also adds Iran, Afghanistan and the Maldives as nations which China is trying to bend to its will via its “Belt and Road Initiative.”

The third link addresses China’s militarization of its base in Djibouti, and the fourth link offers a wide menu of media stories documenting that, Chinese personnel, are already using lasers to try and blind US pilots flying planes in that region. That China is already practicing real-life tests of an ability to use lasers to blind rival pilots should alert all western air forces that China and its allies will use lasers to try and blind pilots flying their warplanes against Chinese targets in any future war. A previous post also reported China was doing the same thing to Australian pilots in the South China Sea region.  Should it not be pointed out that these are already “acts of war” vs. American and Australian pilots?

China is also in the process of converting a seaport in Sri Lanka to Chinese purposes. The fifth link reveals how China uses predatory banking/economic policies to gain inroads into other nations’ territories. China made a huge loan to Sri Lanka for an infrastructure project which China almost certainly knew Sri Lanka couldn’t payback. When this happens, China demands territorial concessions in debt-strapped nations to advance China’s string of pearls strategy designed to encircle and eventually choke India. China now has a 99-year lease to control a seaport in Sri Lanka (on India’s southern maritime border). Only those who are hopelessly naive will think China does not intend to militarize this port to strangle India’s own naval ports by bringing them into the range of Chinese cruise missiles that can be placed in Sri Lanka. China need not build ground launchers for its cruise missiles. China can simply send several Chinese warships to that port before starting a war and then have those warships fire cruise missiles at India’s naval ports from a relatively close range. With Chinese warships launching cruise missiles at India from ports in Sri Lanka, Bangladesh, Pakistan, etc. to start a future war, India could be blind-sided quickly in a Pearl Harbor-like surprise attack.

China is also in the process of obtaining military basing rights in Cambodia on the Gulf of Thailand (sixth link). This location can be used to encircle Vietnam as well as to threaten India, Thailand, Indonesia, Malaysia, and Singapore. The seventh link comments on China’s continuing “bully boy” policies in the South China Sea. A Chinese base in Cambodia will help China to be able to seize control of the South China Sea in any future war. Every land base that China obtains can become a location from which hypersonic cruise missiles can be launched at targets in the regional nations threatened by China as well as at targets of interest to India, Japan, Australia, the USA and all western nations whose commerce passes through the South China Sea and the Indian Ocean.

Frankly, given China’s very aggressive actions to prepare for a war against India and all western nations in the Indo-Pacific region, I’m surprised at how passive India has been in defending its own territory, naval ports, and other interests by making better alliances with neighboring nations. India has strengthened ties with the USA, Japan, and Australia, and these are necessary steps.  However, it does seem that China is establishing a wide variety of military “facts on the ground” while India has remained largely passive. Can it be that India does not yet realize that China is aggressively taking steps to encircle and strangle India?  India needs to take countermeasures as soon as possible to counter China’s actions. India needs allies…a lot of them.

There is another target in the Indian Ocean that China is trying to encircle and threaten. It may not be realized by all that many people, but the USA has a huge military air and naval-base on the British-owned island of Diego Garcia in the Indian Ocean. You can be sure China is well-aware of it. At the outbreak of any future war, hosts of Chinese hypersonic cruise missiles launched from surface warships, submarines and warplanes will be launched at Diego Garcia. I wonder how good that island’s air defenses are? Its time western nations realize China is aggressively preparing to destroy its enemies in the opening salvos of a future large war. China’s targeted nations are still largely in denial in recognizing that China is brazenly preparing for an all-out war. The sooner other nations realize that fact and start taking military countermeasures, the better.

Would it surprise the reader to know that the above alliances and war preparations are entirely consistent with a biblical prophecy written 2500 years ago? Ezekiel 38-39 contains a prophecy which accurately-predicted the modern alliances that have come into being. It also reveals that Russia, China, and Iran will at some future point launch an all-out war vs the western world and its allies. People ignore this prophecy at their own peril. Even as the Creator God accurately fulfilled his latter-day prophecy in Zephaniah 2 that the Jews would again have an independent nation in the former Promised Land that would have the Mediterranean seacoast and the city of Ashkelon within its borders, that same God will accurately fulfill Ezekiel 38-39 in the years ahead of us. Ezekiel 38-39 reveal how World War III will begin, which nations will be allied in the two global power blocs and how the war will be fought and how it will end. If you would like a detailed examination of this remarkable prophecy and how accurately it has foretold our modern geopolitics, please read my free articles, Are We Living in the Biblical Latter Days?, What Ezekiel 38-39 Reveal about a Future World War III, The USA in Biblical Prophecy and Japan’s Role in Biblical Prophecy. If you read these articles, you will understand a lot about what is happening in the modern world and what is going to befall it in the years ahead of us.