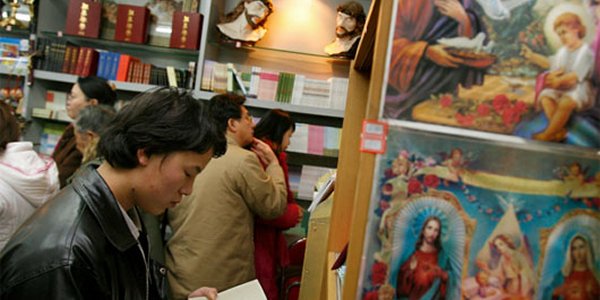 Besides the major geopolitical matters taking center stage on the world scene, there are some significant trends which, while largely ignored, could develop into fulfilled biblical prophecies. One is whether the Holy Bible will be allowed to continue in its historic form or whether it will be revised, censored, redacted, etc. to fit the agendas of the politically-correct crowd or anti-Christian governments all over the world. Let’s look at this trend and where it could go in the future.

The first link offers a report that the Communist Chinese government wants to rewrite the Bible in order to make the Bible acceptable to China’s Communist dogmas. The second link details the efforts of China to ban imports of traditional copies of the Bible via online sales. The third link reports that homosexuals want the Bible revised to expunge its condemnations of homosexuality in both the Old and New Testaments. The fourth link has a video-link that details an effort by a School Board in Alberta, Canada, to compel a Christian private school to revise (redact?) its Bible to express only politically-correct language.

Facebook is currently coming under strong scrutiny and criticism in US Congressional Hearings wherein Facebook’s CEO, Mark Zuckerberg, is now facing the possibility of Congressional regulation of Facebook and other social media platforms to compel them to keep subscribers’ information private and to abandon practices favoring some forms of political speech over other forms of political speech. An example of Facebook’s censorship efforts is found in the fifth link.

The censorship of the Bible or driving consumers away from the Bible is also happening on social media platforms. The sixth link offers video of the digital home assistant Alexa offering a glowing description of the Prophet Muhammad while categorizing Jesus Christ as merely a “fictional” person. There is some controversy about this apparent anti-Christian bias in Alexa, and, in the interest of balance, I’ve included the seventh link which offers a variety of media perspectives on Alexa’s dubious comments about Jesus Christ. The eighth link lists the nations that forbid the possession of a Bible or which severely limit their importation or use.

Christians in modern western democracies do not generally realize that their beliefs and their Bible are under relentless attack by the advocates of politically-correctness. The Bible’s uncompromising condemnation of homosexuality seems to be the number one target of the PC camp. How could this have a biblical significance for the latter days? Revelation’s prophecies about the creation of a global “beast” system (Revelation 13, 17-18) indicate that this new global system will so deceive and indoctrinate the masses that the nations will actually fight against Jesus Christ at his Second Coming (Revelation 19:11-20:4). This outcome argues that the Beast and False Prophet (or “man of sin”–II Thessalonians 2) will impose a new and inaccurate Bible on the earth which will be sanitized and have its prophecies rewritten to support the agendas of the anti-Christ forces behind the beast power. I suspect the beast power, perhaps in concert with Satan and his fallen angels, will dupe mankind into fighting Jesus Christ’s heavenly army by tricking mankind into thinking Jesus’ army is a hostile alien invasion and that Satan and his hosts are mankind’s allies to “help” mankind resist that invasion. Remember, Jesus warned in Matthew 24:21-28 that the end-time deceptions will be so pervasive and convincing that “if it were possible,” it would “deceive the very elect.” That convinces me that every conceivable tool in the physical/technological and spiritual realms will be unleashed in a way that will have the world agog with wonder at what they are seeing. Amos 8:9-12 contains a prophecy that “in that day” (a prophetic phrase often referencing the latter days of our age) “a famine…of hearing the words of the Lord” will occur that will be so pervasive that people will be unable to even locate the “words of God.”  Since the “words of God” are in the Holy Bible, this prophecy would be fulfilled if it becomes illegal to sell or own a copy of the Bible in its original form. But God’s enemies need to be warned: at the conclusion of the entire Bible, God places a terrible curse on people who would “add” or “take away” any of the content of the originally-inspired Bible.

Do my American readers think such a purge of the scriptures can’t happen in the USA? I ask you to consider that such an outcome has already very nearly happened. In the 2016 election, Democrat Hillary Clinton mocked and denounced “half” of Donald Trump’s supports as being “” who were “racist, sexist, homophobic, xenophobic [and] Islamophobic.”  In other , Clinton was profoundly contemptuous of people who believed biblical Scriptures and teachings about divinely-ordained gender roles, proper sexual practices, the biblical of nations, etc. If she had been elected president, she may have already tried to issue Executive Orders to stop the publication or possession of Judeo-Christian Bibles because they had “politically-incorrect content” which constituted “hate speech.”  I don’t think Hillary Clinton would have let the US Constitution’s Bill of Rights protecting freedom of religious expression and freedom of speech to stand in the way of her agendas of intolerance and ideological tyranny. Adolf Hitler’s Nazi party had huge book-burnings to get rid of whatever did not fit its racist dogmas. Are Bible burnings coming in the future?

In the  correct translations of the Bible become illegal to print, sell or even own in the future, you may want to take steps now to make sure copies of the Bible in your possession survive and are not destroyed. Are there internet links at Christian websites (or even at my website) that you like to read, forward or access? Given the biblical prophecies that a real “famine” of being able to find God’s Words is coming in our world’s future, you may want to print out to hard copy anything you want to preserve for the future.