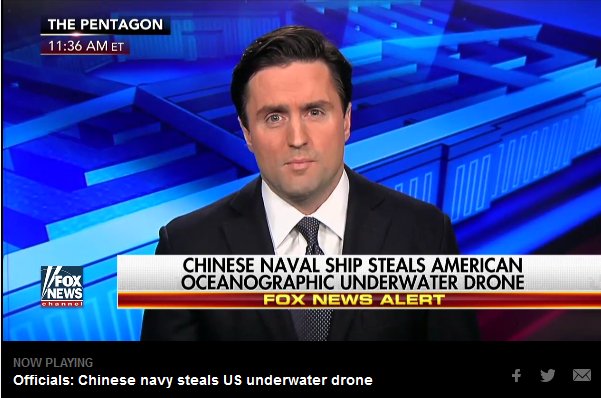 Another event has occurred which attests to the abject weakness of President Obama and his administration vis-à-vis China. Chinese forces brazenly stole a US drone in international waters while the US crew of the offended ship looked on helplessly (first link and second link). Apparently, no one in Obama’s defense department had even thought about providing military security for this US ship and its equipment. This event is one more in a long line of events which have made the USA seem utterly neutered in its will to take any actions in behalf of itself or its allies under Obama. It is noted in the first two links that the US State Department has sent a notice of protest to China about China’s brazen theft and perhaps even an act of war perpetrated vs. the USA on the high seas. I’m sure Chinese leaders had a good laugh when they read it after printing it out. Perhaps they put Obama’s protest note in a room where refuse is put in case there is ever a toilet paper shortage in Beijing. China has no reason to take Obama or his administration seriously. They just openly showed the world (again) that China is militarily ascendant and that the USA under Obama is a paper tiger with no willpower at all.

China has also taken additional bellicose steps toward all nations in the Eastern Pacific region. Chinese nuclear-capable bombers recently flew past Taiwan in an obvious act of intimidation toward the nation of Taiwan (third link). China has also been building a string of artificial islands in the South China Sea to assert its unrecognized and illegal claim to sovereignty over most of the South China Sea, and Obama, the USA and the world community have done nothing to challenge or stop China’s belligerent action. Now, China is in the process of militarizing its new artificial islands by placing advanced weaponry on them–a development that was inevitable to any clear-eyed observer (fourth link). Historically, it reminds me of the time Hitler marched his troops into the Rhineland and militarized it in 1936 in violation of the international agreements in force at that time. The western allies did nothing to stop him so Hitler became convinced of the allies’ weakness so he prepared to launch World War II. China is doing the same thing Hitler did. It is taking illegal actions in the South China Sea to see if anyone will stop/challenge them. No one has done so. Therefore, China is likely making plans for a larger war, convinced its rivals are all weaklings.

However, things may be about to change…big time. Donald Trump’s election to the US presidency, in spite of the combined opposition of the globalist elites, the US governmental and media establishment, etc., means that he comes into office owing nothing to the elites at all in how he wields the powers of the US presidency. In a clear statement that he is not bound by any previous commitments to or agreement with China, Mr. Trump broke all diplomatic precedents and chatted with the president of Taiwan soon after his election victory (fifth link). This angers China which regards Taiwan as merely a renegade province. Mr. Trump’s phone call served notice that he will conduct his own foreign policy as he sees fit, and that he will not be controlled by what his predecessors have done.

When Mr. Trump becomes President Trump, it would be reasonable to expect China to provoke Trump with some kind of bellicose action to test his mettle. Indeed, it may be President Trump who initiates a challenge to serve notice that the USA is no longer a wimp on the world scene. We’ll see. However, I know what I’d be doing if I were in President Trump’s shoes. As soon as I was in office, I’d announce a major agreement with Taiwan to build a major new military air and naval base in Taiwan. It would be built quickly with Taiwanese help and it would be bristling with all kinds of offensive and defensive missiles as well as squadrons of US warplanes as soon as it was ready. I’d also announce that if China doesn’t want it to be built, they merely need to do one thing. They need to dismantle all their military facilities on their artificial islands in the South China Sea, blow up all facilities and runways built upon them and renounce any sovereign claims to the South China Sea beyond what is customary under international law. If China refused to dismantle its military bases on the artificial islands which were built in contravention to international law, the US base on Taiwan would become a reality…fast. I’d also quickly place cruise or short range ballistic missiles on Taiwan (or on nearby submarines) right away which could reach and destroy the Three Gorges Dam in the event of any war breaking out, and I’d let China know their prize dam will be the first casualty in any war in the region. Indeed, we could sell conventionally tipped missiles and bunker-buster bombs to Taiwan so they could use them if China attacked Taiwan. After all, how many bunker-buster bombs would it take to breach the Three Gorges Dam and cause a catastrophic freshwater tsunami which would inundate and destroy cities and military facilities and cause mass casualties from the dam all the way to the Pacific Ocean. China needs to know that the costs of starting a war in the South China Sea or against Taiwan will be so devastating to China that they will be deterred from starting such conflicts.

Do my above suggestions sound bellicose or “hard-line” to some readers? It may surprise you to know the war-planning to attack the Three Gorges Dam if China attacks Taiwan has already been done long ago. What I’m suggesting is nothing new. The sixth link and seventh link detail that war plans were prepared over a decade ago for an attack against China’s Three Gorges Dam if China attacks Taiwan. The eighth link indicates Taiwan already believes it has the weaponry to destroy the Three Gorges Dam in any conflict that erupts. The ninth link reports China’s plans on defending the dam against attacks by terrorists or missiles. However, I doubt the dam can withstand a barrage of concentrated bunker-buster bombs or other weapons in the US inventory that are not discussed openly. Also, the water held back by the Three Gorges Dam has had a decade or more to increase since the sixth through eighth links were written. A breach of the dam would be vastly more destructive now than when those links were first authored.

China has long had its way with mocking Obama and his entire administration. Trump is coming into office with a whole new mentality of “make America great again.” I do not doubt that he is serious. His cabinet features appointments to high office of “fighting generals” instead of the politically correct generals that Obama favored. It is my strong impression that Trump intends to treat allies and friends as allies and friends, and treat rivals and enemies like rivals and enemies. As long as Obama has been in office, China has had the complete advantage because Obama has consistently been a paper tiger. When Trump comes into office, China will be dealing with a real tiger for at least the next four years. This should be of immense encouragement to America’s allies around the world who have been distressed to see America become a welcome mat to be walked on under Obama. I think those days are coming to an end…soon.