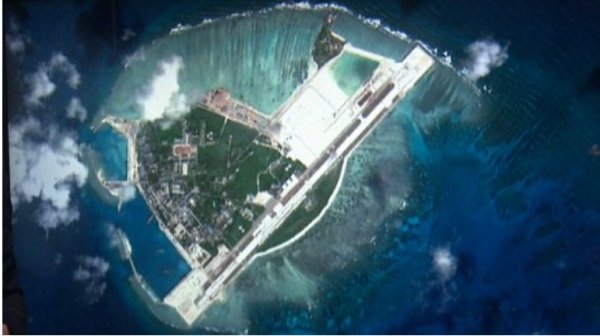 A few days ago, a very important event occurred. The International Court of Justice ruled that China has no right to exercise any sovereignty over much of the South China Sea region that it has claimed. While the ruling includes no “hard power” in terms of any military force being able to immediately enforce the ruling vs. China, it gives a lot of “soft power” to the nations in the region who have opposed China’s expansive claims. It gives them a strong imprimatur of international approval for any alliance that they form to oppose China’s claim in the South China Sea or for any action they take to roll back China’s claims. It essentially identifies China as a renegade power in the region, and has the de facto effect of ruling that the artificial islands in the area built by China are invalidated by the international community. The situation is not unlike that in 1950-52 when North Korea invaded South Korea and the UN voted to brand North Korea an aggressor. This resulted in a war in which a UN-approved, international coalition led by the USA fought the North Koreans and the Chinese. In 1950, the UN vote occurred during a hot war on a landmass bordering China. The International Court ruling comes at a time when there is, essentially, a cold war going on in existence in the maritime region of the South China Sea.

The first three links below offer details of the ruling and its effect. They also include excellent aerial photos of the intense dredging efforts being performed by Chinese ships to create these artificial islands which China is beginning to militarize. China is clearly in a hurry to build and militarize these artificial islands to enable China to defend its claim to the South China Sea. China has spurned the International Court’s ruling, and I expect the ruling will have no impact on China’s actions. However, it could have a dramatic effect on the nations outside China as it creates a very favorable international context for these nations to form a military alliance to oppose China’s claims, and, if necessary, go to war to remove any Chinese sovereignty over the massive region of the South China Sea region that it has claimed. These nations include the Philippines (which brought the case to the international Court), the USA, Japan, India, Australia, Vietnam, Malaysia, Singapore, Indonesia, Taiwan, etc. [The third link has a good article with incisive analysis of the ruling, but you will have to penetrate some ads to get to the article].

In looking at the claims of China over almost the entire South China Sea, it is evident that their claims are absurdly expansive and indefensible on any historical or legal basis. It claims sovereignty to a large region of maritime shipping that has long been regarded as international waters. Personally, I think China is very well aware of this. China is not at all dumb. They are, I think, being very clever about the methodology they use to provoke a regional war. They have been bellicose all along, and they are acting as if they want a regional war to test their many new types of weaponry in combat conditions. As I have noted in a number of previous posts, China has built a panoply of new weapons designed to sink US aircraft carriers. These weapons include new supersonic cruise missiles, ballistic missiles, new torpedoes, etc. China is keenly aware that the USA will have to intervene in the war if its allies are involved in a regional war against China, and China also knows that the USA will need to use its carrier task forces to fight this war. China has cleverly chosen the location for a major regional war, and made sure that it is within range of its numerous land-based military aircraft so its warplanes will likely outnumber those of any rival alliance. India has an aircraft carrier task force and Japan has also built new carriers which are not called “aircraft carriers,” and China knows India and Japan would likely have to deploy these carriers in any such regional war over the rights of international commerce to transit the South China Sea. China may actually want to test its weaponry against American, Indian and Japanese carriers. That China is acting in such an aggressive and militaristic manner in the South China Sea tells me that China thinks it can sink these aircraft carriers and is spoiling for a chance to prove it. If China can sink these carriers, China will become the new global superpower and the USA’s time of being the world’s superpower will be over. If China can sink the US carriers, I think they will then move on to an effort to “sink” the US dollar as the world’s reserve currency. However, China has cleverly given itself a fallback position. If the US has sophisticated new weaponry the Chinese did not expect and the war goes badly for China, China can retreat to the status quo ante and declare the entire matter a “misunderstanding.”

As readers of this blog know, I’ve repeatedly pointed out for years that the Bible’s prophecy in Ezekiel 38-39 foretells that Russia, China, Iran and their allies will form an alliance vs. the USA, the UK, NATO and its western allies around the world. Based on the Bible’s prophecies, I’ve been writing and speaking about this prophecy since the 1980s. After the Berlin Wall fell and the “Cold War ended,” there were those who thought I was way off in my prophetic expectations. However, as the endless wars in Iraq and Afghanistan sapped the USA after 9/11, and after the USA’s federal budget and trade deficits became totally out-of-control via a series of unwise presidents and congresses, the prophesied alliance of Russia, China and Iran has come into being after all–exactly as the Bible said it would in the “latter days” of our age (Ezekiel 38:8 and 16). Under President Obama, the USA has bizarrely assisted the rise of Iran to be a growing military threat to all surrounding nations in Iran’s region of the world. Russia, China and Iran are rapidly modernizing and expanding their military power while Obama has been weakening and reducing the USA’s military power and the NATO nation’s have badly neglected their defenses. The stage is being set for the fulfillment of Ezekiel 38-39’s prophecy in the time ahead of us. As always, I never predict when this will happen. It will happen on God’s timetable as he wills it. It is my expectation that we are several years away from this war as I expect it to occur after the ministry of the Two Witnesses which will last 1260 days (Revelation 11); however, I claim no infallibility for my expectation. It may happen sooner than I expect it. I have also posted that although Ezekiel 38-39 reveal in advance how the final age-ending war between global alliances will unfold, this prophecy does not preclude the occurrence of regional wars between these alliances and their proxy forces. If China does provoke a regional war I expect that Chinese forces will also be firing new Russian and Iranian weaponry at US carriers so the Gog-Magog alliance of Ezekiel 38 can field-test all its new weaponry at once. If the USA can defend its carriers vs. all Chinese, Russian and Iranian weapons used in any South China Sea regional war, it means that the final Ezekiel v38-39 war will be delayed, as the Gog-Magog alliance will know it has to improve its weaponry. If they can sink the USA and allied carriers, that will signal to the Gog-Magog alliance that the West is weak and the prophesied war in Ezekiel 38-39 may occur sooner than I have expected. For a detailed examination of Ezekiel 38-39’s prophecy, please read my article, What Ezekiel 38-39 Reveals about a Future World War III.

The final link reports that China may declare an air defense zone over the South China Sea as part of its asserted claim over that large body of water. If it does, we will be close to China telling the USA and its allies: “Put up or shut up.” China’s rival nations will then eventually have to go to war to defend their claim that the South China Sea is a maritime zone of international waters with freedom of navigation or they will have to meekly submit to China’s sovereignty over the South China Sea (especially if the Chinese navy starts charging tolls for all ships wanting to transit the South China Sea). For the USA and the Obama administration, submitting to such Chinese actions would be tantamount to admitting the war is lost without even bothering to fight it. This would have catastrophic consequences for the USA, the Western alliance and all global currency, financial and commodity markets.

Let’s watch this carefully and see what happens!