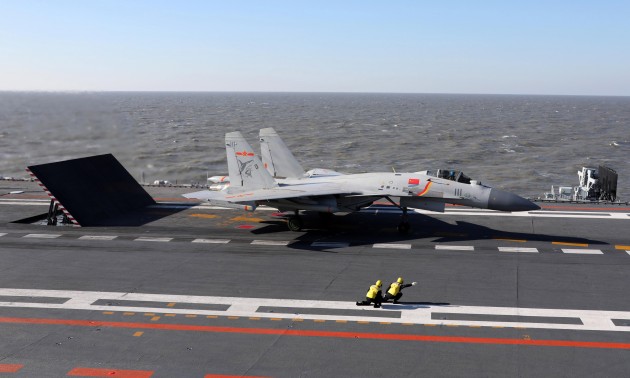 China recently conducted live-fire drills during sea trials of its new aircraft carrier task force. The drill featured live firing of a variety of guided missiles, and took place close to Korean waters. The intimidation factor toward Korea seems self-evident by China’s choice of where to conduct the live fire drill. Ten Chinese warships participated in the drill as well as ten warplanes (first link). China also is very rapidly weaponizing a series of artificial islands in the South China Sea. I think that they are trying to build as many “facts on the ground” as possible while they have a weak American leader in the White House who does nothing to deter them from continuing to weaponize these islands. A set of good aerial photographs of the weaponization of China’s artificial islands is found in the second link, along with a description of the reconnaissance photos.

China is also seeking to intimidate Japan by dramatically increasing its military warplane sorties toward Japanese airspace, forcing the Japanese to dramatically increase how many times their fighters have to scramble to intercept Chinese warplanes approaching Japan (third link). That link also reports Russia has increased its warplane sorties toward Japan, and (more ominously) that Russia has positioned missiles in the Kuril islands north of Japan.

China and Russia are forcing other nations in the Western Pacific Rim region to bolster their own military forces and defense ties with other nations. The fourth link details a new Japanese missile with a 400 km range which can be seen as an offensive weapon that could be used against its enemies. Japan’s post World War II Constitution caused Japan to be pacifist for many years, but China’s rise as an enemy of the western nations has forced Japan to gradually transition into being a major military power to defend itself.

Chinese militarism is not intimidating Singapore, as the fifth link reports. China seized a shipment of military vehicles bound for Singapore manufactured in Taiwan as they were being trans-shipped via Hong Kong. If China expected this action to intimidate Singapore, this seizure has likely backfired on them. This link also notes that the Philippines and Malaysia have been tipping toward China recently, but that may change soon. President Obama offended the Philippines when Obama questioned whether the Philippines were giving enough “due process” to drug lords, which caused that nation’s leader to threaten to align with China instead of the USA. With Donald Trump becoming the new US president in January, it is possible the Philippines will be mollified and resume its traditional alliance with the USA. The sixth link documents the increasingly warm relations between the USA and Vietnam.

Now for some analysis of the above. China’s live-fire exercise involving its new carrier battle group is somewhat underwhelming in my view. China is taking necessary baby-steps in developing tactics in how to operate and deploy an aircraft carrier battle group. The USA, in contrast, has had over 70 years of experience in all the nuances in operating and protecting carrier battles groups in all kinds of weather conditions and in both peace- and war-time. No nation on earth has more operational carrier expertise than the USA. So far, China’s lone carrier seems to function as merely a mobile airfield just off the coastal waters of China instead of serving as an actual blue-water force. If China has even attempted carrier landings and take-offs of warplanes during nighttime or in inclement weather conditions, I have seen no report of it. Given China’s immense financial resources in recent years, it is more than revealing that China has only put enough funds into assembling a single carrier battle group when they could have built many carriers if they had wanted to do so. Indeed, the carrier in the live fire drills was built by the old Soviet Union, not China. That China has invested little of its military money into building carriers is, I think, evidence that China thinks carriers are much easier to sink than to defend. Of more concern to me is the rapid weaponizing of the artificial islands in the South China Sea. This action presages that China will, when it thinks it is ready, precipitate a military crisis in the South China Sea. From China’s point of view, it may think it best to provoke that crisis before a new President Trump acts on his promise to rapidly rebuild the weakened US military forces. A strong US president could also have the effect of galvanizing into reality the budding alliance between nations in the western Pacific (threatened by China) and the western world led by the USA.

These continuing developments are totally consistent with the prophecy of Ezekiel 38-39 that details the rival end-time alliances prophesied in those chapters to come into reality at the end of our age. Readers who have followed my blog for any length of time are well aware of my reasoning on how these chapters are being fulfilled in modern geopolitics. Others may gain a comprehensive insight into how Ezekiel 38-39 is being fulfilled with remarkable precision in modern global events by reviewing my free article, What Ezekiel 38-39 Reveal about a Future World War III.