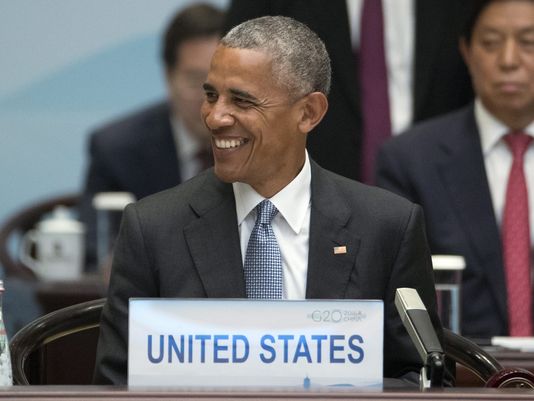 There are a number of other subjects I’d like to post on, but world events just keep coming in ominous importance. In a story that was so obvious to the entire world that even the US media couldn’t “cover it up,” US President Obama was snubbed by China in what could be an unprecedented manner for any leader in perhaps the history of the G-20 meetings. China hosted the G-20 meeting this year, and it picked this moment to openly bully and snub Obama and the USA in a remarkable fashion.

Usually, the nation hosting important global meetings for world heads-of-state (i.e. meetings of the G-20, G-7, G-8, etc.) go out of their way to observe and extend every respectful diplomatic protocol and sign of respect possible to showcase their own nation and hospitality. China chose to extend numerous severe diplomatic snubs to Obama, but extended respectful treatment to other world leaders. I personally think that the Chinese were testing him to see if he had any backbone at all. If Obama had any self-respect or backbone, Obama should have gotten back on Air Force One and publicly left China as soon as the snub-fest became apparent.

The first three links below offer details about the Chinese snubs. Obviously, they were intentional and the first link describes the Chinese snubs as “orchestrated.” The list of snubs include: (A) refusing to even provide Obama’s airplane with the standard mobile staircase so Obama was forced to exit his own plane from its “rear-end”– a symbolic insult?, (B) refusing to provide Obama a red-carpet to walk on while giving all other national leaders the “red-carpet” treatment, (C) blocking normal US media access to events, and (D) attempting to block US National Security Adviser Susan Rice from joining Obama’s retinue. This is a major list of huge Chinese diplomatic and personal snubs to Obama in particular and to the USA in general. One British media outlet especially noted that China’s forcing Obama to exit his own plane via the “ass” end of Air Force One is a clear symbolic statement of what China thinks of the US president.(fourth link).

The Chinese clearly showed the world that Obama has a total “loss of face” in their eyes, and did not deserve respectful treatment. Obama tried to “spin” the obvious snubs with comments to downplay them, but, in my view, he was merely trying to “put lipstick on a pig” (to borrow a phrase I first heard uttered by then-GOP Vice Presidential candidate Sarah Palin).

Obama is the first president in US history, I believe, to be so publicly insulted, mocked and bullied by a foreign government in a major global meeting. President Reagan would never have allowed this, and there would have been “hell to pay” if China had done that to him. President Bush would never have been treated so indignantly by China as China at least respected Bush’s willingness to use national power. Let’s face facts. China treated Obama as if he were a clownish buffoon on the world stage. Obama just “took it” and allowed it to happen. The rest of the world’s leaders all saw China’s public bullying of a US president and they all saw Obama’s lack of any meaningful response to the snubs. Obama’s comments argue he really does live in a dream world where he re-interprets reality to fit his inner delusions. I’ve seen articles and commentators on TV programs point out this same trait in Obama’s longstanding inability to face reality and call radical Islamic terrorism by its true name.

As this blog has warned (and as many media observers have noted at length), China is making a power play to seize the South China Sea. For other nations in the region to resist China, they need a strong United States of America with the power and will to oppose China. Obama could hardly have failed more miserably than he did at displaying the necessary US leadership that needed to be shown. It is not impossible that China’s real agenda in snubbing Obama so openly was trying to determine if it could goad Obama into an angry response that would indicate that he was capable of taking serious action to militarily oppose China if China moves to seize control of the South China Sea. If so, the Chinese learned that Obama was a weakling whose response need not be feared. Obama’s profound weakness on the world stage makes war more likely as nations like China and Russia cannot help but think that if they are going to do anything militarily, they better do it while a weakling like Obama is in the White House. There is no way a President Donald Trump would put up with the Chinese insulting the USA like this. China, Russia and other nations know this too.

The bottom line is that Obama acted like a very poor excuse for a world leader at the G-20 meetings. This makes the remainder of his term of office a dangerous time for the West and for the world as a whole as the West’s enemies see the time from now until the end of Obama’s term as a limited window of opportunity to act militarily while the USA is led by a buffoon who is not capable of seriously opposing the enemies of the USA and the West. The Obama administration reminds me of a badly-organized and badly-run circus with Obama as a mere clown who is “in over his head” as he tries to play the role of the ringmaster.

What this means re: prophetic fulfillment is not yet knowable. However, Matthew 24:6-7 warn of “wars and rumors of wars” during the end times of our age. Obama’s highly-insulting treatment by China at the G-20 meeting and his insipid response to it makes war more likely. Maybe nothing will happen, but I know this for sure. If I were the leader of Russia, China or Iran at this time, I’d decide that now is the time to implement military actions while the USA is weak and led by an even weaker leader.

I mourn for my nation…and the condition it is in.