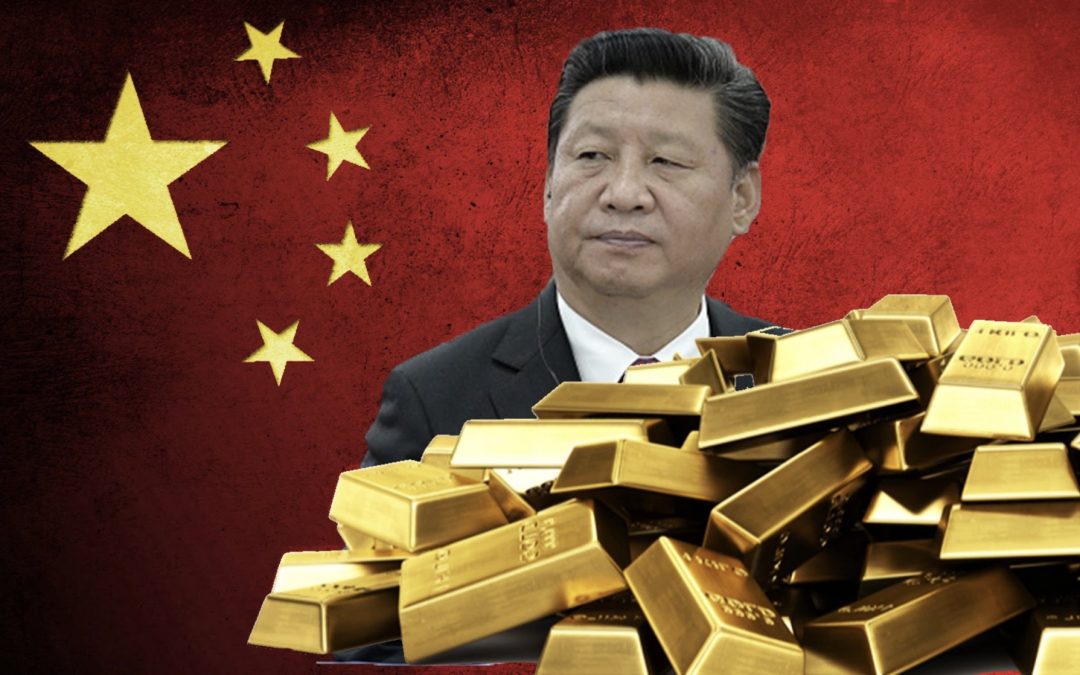 Something major is happening in the global financial markets which is receiving scant attention. China is buying up a huge amount of gold on the global markets, but few people are asking the obvious question: Why?

It is no secret that China intends to replace the USA as the global financial and military superpower. China has been taking many steps to do this for years. However, China is now focused on buying up as much gold as it can (first link, second link and third link). China wouldn’t be doing this unless it believed that having a horde of gold will give it financial/monetary dominance in a new global economy dominated by China. Over the years, there have been periodic rumors that China and/or Russia would create a gold-backed currency to challenge the US dollar, which is a fiat currency not backed by any precious metals. Given China’s gold-buying binge, it seems that China may now be preparing to create a gold-backed Yuan to dominate all other currencies. If China does so, all other national fiat currencies will be at a huge disadvantage. Many nations may very well then be forced to take steps to back their own currencies with gold, but there won’t be a lot of gold on the open market to buy once China has bought up much of the world’s gold supplies. If nations scramble to obtain gold to back their own national currencies, the demand for gold will skyrocket…as will the value of all the gold in China’s custody.

If China establishes a gold-backed Yuan, China will be in a position to set the world price of gold. When/if China announces a gold-backed currency, it will likely be a surprise act that is done at a time of China’s choosing. The price of gold in all fiat currencies would likely skyrocket. The nominal combined value of all the world’s fiat currencies (in circulation and in digital accounts) is so vast that the price of gold would have to go up to a currently unimaginable price to back all that fiat money. It is also entirely possible that China (or Russia) would back their currency not only with gold, but also with silver, platinum, palladium and very valuable rare earth metals. Other nations would almost surely do the same.

In the links you will find a chart that lists the amount of gold owned by the major gold-holding nations. I suggest you take that chart’s totals with a big grain of salt. Some nations have more than they admit and others have far less than they claim. Let’s look at the USA for a moment, reportedly the biggest gold-holding nation, I doubt that to be the truth. Consider the gold in Fort Knox. If one went on a tour of that gold-storing facility, it would almost surely look impressive. However, there are at least two major problems.

As I have discussed in previous posts, some gold bars around the world were shown to not really be gold bars. They were a tungsten (or copper) bar with a thin veneer of gold painted over the base metal surface to make it look like a solid gold bar. The fourth link describes some of the chaos which occurred in the global gold markets a couple years ago when frauds occurred and futures market contracts were in doubt. China and Ethiopia were two nations victimized by fraudulent gold bars. Other nations may very well have “gold bars” in their inventory which are not really gold bars at all. One would have to do core boring tests of every gold bar to see if it is genuine or not. The second problem is that many nations store gold for other nations’ accounts. The fifth link describes a crisis in the gold market when Germany tried to take possession of its gold that was in storage in the USA and France. If the gold was really stored safely in another nation’s vaults, a simple transfer should be able to be arranged in a short period of time. However, these nations had a hard time actually finding and shipping Germany’s gold back to Germany. This infers that Germany’s actual gold had been somehow repurposed (loaned out, used as collateral for some third-party’s debts or “encumbered” in some form). It is my understanding Germany finally got enough gold back to satisfy its demands, but if such difficulty in nations transferring gold to each other can happen in “normal” times, think how unwilling nations will be to transfer gold to other nations if China declares a gold-backed currency and the value of gold skyrockets. Let’s go back to the gold at Fort Knox. The USA has an unimaginable pile of public and private debt instruments issued, and I think only the gullible think those debts will ever be repaid. It is entirely possible that a large percentage of the gold “stored” or “domiciled” at Fort Knox inside the USA is not “American” gold. Much of it may be physical gold that actually belongs to other nations but is being stored in the USA (like Germany had done). Other portions of US gold may be held as collateral for any number of debts or perhaps had been “loaned out” for some purpose. All such gold is considered “encumbered,” and it is not owned “free and clear” by the US government. Don’t expect any forensic audit of the gold stored at Fort Know any time soon; I think many do not want the world to know the actual real amount of unencumbered gold owned by the US government.

It is not just China that is amassing a gold horde. The sixth link reports that central banks have also been on the biggest gold-buying binge in over half a century! Central banks follow very closely what happens in the financial/monetary markets. Why are they now  amassing gold in a huge way? Could it be they see China accumulating so much gold that it will soon be in a position to declare a gold-backed currency intended to supplant the USA as the dominant world financial power? If so, central banks would logically stock up on as much gold as possible because they know its price will skyrocket in the future and they are making contingency plans to back their national currencies in gold as well.

Since China and the world’s central banks are on a gold-buying binge, it argues that China may soon declare a gold-backed currency as a way of taking down the debt-laden US fiat dollar currency. The seventh link offers the warnings of a respected world financial analyst that we are heading for the “mother of all economic crises.” While I am not a financial analyst, I think his warnings explain how China and many central banks are preparing for this super crisis–they are buying as much gold as possible.  While gold is the premier precious metal, silver, platinum, palladium, rare earth minerals and perhaps even gemstones may be used to create “asset-backed” national currencies.

At some point, a major global super-crisis will occur.  As usual, the masses will be the last to know it is coming. The insider elites will situate themselves to be safe during the crisis when it occurs, but the Bible has prophecies that their plans will go horribly awry. Revelation 17-18 foretell that a massive, global financial/monetary crisis will occur which will overthrow the entire current global system–called “Babylon the Great” in this prophecy. Its collapse will not be accidental. Revelation 17:7-18 prophesies that a cryptic alliance of “seven heads and ten horns” will trigger a crisis to tear down the entire current global system. Revelation 18:11-15 clearly prophesy a future global monetary crisis: the world’s merchants will have many goods and services to offer, but no one can buy their products. This sounds like the fiat currencies have collapsed and no one knows what can serve as a reliable medium of exchange. Will gold-backed currencies step in and form a new global currency system based on an upwardly-changed value of gold, silver, etc.? The fact that Revelation 18:10, 17 and 19 all foretell that the global collapse will only take “one hour” to unfold confirms the accuracy of Bible prophecy. Such a global collapse could only happen in a system where all things are priced in interconnected, digital money forms. If one digital financial market melts down, the counter-party risks in all markets could quickly take down all global financial markets like a row of dominoes falling. I do not “set dates” for prophetic fulfillments, but the global markets look very shaky to various well-respected analysts. I think we should be listening to them.

If you desire to know more about what Bible prophecy has to say about the times we are living in and how the global financial collapse might occur, please read my articles, Are We Living in the Biblical Latter Days?, The Babylonian Origin of the Modern Banking System, and Is “Babylon the Great” about to Collapse…Ushering in a Global “Beast ” System?