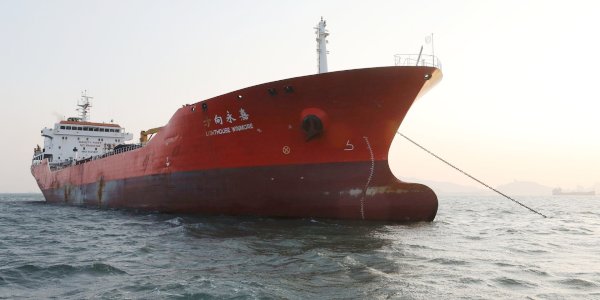 It appears that China has just been caught red-handed supplying North Korea with oil supplies in spite of China’s agreement to a UN resolution that the nations of the world will sanction North Korea by forbidding a host of products and supplies from reaching the hermit kingdom. A ship from Hong Kong was caught transferring oil from another ship so it could take it to North Korea in spite of the global sanctions vs. North Korea (first link and second link). The South Korean navy has seized the ship and taken it into custody for now. China denies that it knew anything about it. Do you believe that statement? I don’t.

This incident raises many questions and reveals some unspoken facts. To begin with, I cannot find China’s denial to be credible. Hong Kong is Chinese territory, and China’s intelligence-gathering networks surely know everything that occurs on, in and over that small city-state as well as everything that passes through Hong Kong. When China wants to do so, it asserts a heavy hand via its sovereignty over Hong Kong. However, when a Hong Kong ship is caught red-handed trying to supply North Korea with oil via a sophisticated ship-to-ship transfer on the high seas, China expects us to believe it when it says, effectively: “This happened with a Hong Kong/Chinese ship and they were trying to sneak oil into North Korea? We surely knew nothing at all about it.” Maybe China should blame Somalian pirates. It would be about as credible a claim. The links also reveal that the ship that was seized had an almost all-Chinese crew. I’m sure that is just another remarkable coincidence, don’t you? Hmm. China has long been North Korea’s main ally, trading partner and supplier of almost everything. An almost all Chinese crew is seized on the high sea conducting a clandestine ship-to-ship oil transfer between two vessels so oil can be sneaked into North Korea. Just a coincidence, surely. “Move on everyone–nothing to see here,” says China.

The fact that clandestine shipments of this nature are being made on the high seas convinces me that this was a state-sponsored operation. Have you ever seen a documentary about how risky such ship-to-ship oil transfers are out in the large sea swells of the ocean? It is a nerve-wracking, high-tech operation that only the world’s major navies even attempt. It requires sophisticated pumps, sensors, stabilization technologies, etc. and highly-trained crews to even attempt such an operation. Yet China would have us believe that a few freelance smugglers got together and decided to do this on their own? Right.

President Trump is upset, justifiably, with China for this incident (third link). Almost certainly, this is not the only means via which clandestine shipments are being made of vital supplies into North Korea. The fact that there are sophisticated shipments of clandestine cargoes to North Korea means that there is little hope that sanctions or diplomacy will be able to convince North Korea to divest itself of its nuclear weapons. That high-tech resources are being used to cheat on the UN sanctions will likely convince North Korea that it can get by without having to abandon its nukes. This means that a military preemptive strike is the most likely climax to this crisis.

The fact that these two ships were caught making the oil transfer indicates that the USA and its allies have a very tight surveillance network in place on land, sea and air to monitor when and how North Korea receives any cargoes from the outside world. I’m sure this network uses satellites, aerial reconnaissance flights, electronic interceptions, etc. Making the seizure of this offending ship to be a high-profile media event is one way of announcing to the world that other blockade-runners ought to stop their efforts because they will likely be caught. Only if North Korea really feels the pain will there be any chance for a resolution of this crisis via diplomacy or sanctions.

Another serious question that the world media is not asking is: Where is backward North Korea getting the highly-refined fissionable nuclear material and/or plutonium to make an expanding number of nuclear weapons? This kind of material is a closely watched and monitored commodity all over the world. Did it come across the Yalu River from China labeled as “machine parts” or something else? There are only three nations that I can think of that would have supplied North Korea with nuclear bomb making material and technology. Those nations are China, Iran and Russia. Previous posts have listed many links documenting Iranian-North Korean nuclear cooperation. However, Iran would need help making sure these shipments got to North Korea safely. One thing I think we can conclude with certainty. North Korea does not have the skills, material or technology to make nuclear weapons and ICBMs in an assembly-line fashion. North Korea has no big domestic nuclear energy industry supplying massive amounts of electricity to its people. Indeed, North Korea scarcely produces any electricity. Many of its people live in the stone age. Have you seen satellite photos of the world at night with entire metro areas and nations glowing white from massive electricity usage? North Korea stands out as a blackened-out region on the globe as it has few locations that have any electricity at night. North Korea obviously has had high-tech partners in its nuclear weapons and ICBM programs. If the USA can identify who those “partners” have been, those “partners” may also find themselves targeted by any US and allied preemptive strike.

We really do live in increasingly dangerous times–just as the Apostle Paul prophesied would occur in the “latter days” of our age (II Timothy 3:1). If any reader has any doubt that we live in the biblically-prophesied latter days, please read my article, Are We Living in the Biblical Latter Days? This article will not ask you to take that conclusion “on faith.” It will “prove it to you.”

Also, Ezekiel 38-39 and other biblical prophecies predict an age-ending world war that will jeopardize all human life on earth. They prophesy that three major nations (Russia, China and Iran) and their allies will attack the nations of the western world and their allies.  Many biblical prophecies indicate that this age-ending war will climax with the return of Jesus Christ at the head of a heavenly army to literally “take over” the governments of the entire planet and set up a divinely-organized new governing system on earth (Ezekiel 38-39, Joel 2, Zechariah 12 and 14, Matthew 24, Revelation 19:11-20:4, etc.) It is an understatement to say that the world is not ready for this event and it is correct to state that it does not believe it will happen. If you would like to read an in-depth examination of these prophecies, please read my article, What Ezekiel 38-39 Reveals about a Future World War III. Jesus Christ prophesied in Matthew 24:6 that “wars and rumors of wars” would precede his second coming. If the last gasp sanctions/diplomacy efforts to “denuclearize the Korean Peninsula” fail, we are very likely to see a major war unfold. If it does occur, it will be over as quickly as President Trump decides to end it with extreme prejudice for North Korea’s leaders and its interests. He has such power at his disposal.