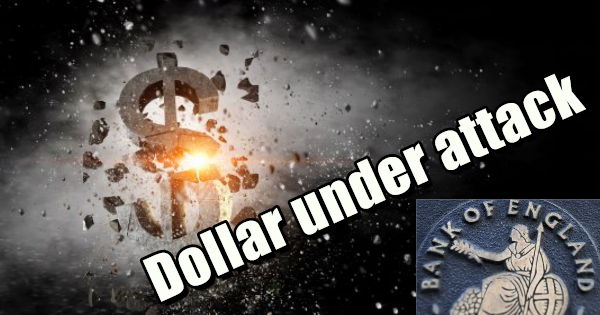 At the same time that escalating tensions occurred in the trade war between the USA and China, an “unprecedented” and “shocking” development occurred in the normally staid world of the global central bankers. The central bankers were attending their annual get-together in Jackson Hole, Wyoming when one of the most shocking statements in the history of global central bankers was made. A governor of one of the most important global central banks, the Bank of England, made an assertion that astounded investors, analysts, and governments all over the world. Bank of England Governor Mark Carney reportedly stated that there is a need to “overhaul [the] financial system” and that there is a need to “replace the US dollar with a Libra-like virtual one (emphasis added).” I copied those quotes as they appeared on the Bloomberg Financial Cable-TV channel. Coming from a governor of one of the pre-eminent central banks in the world, his statement stunned the financial markets. His statement actually calls for the end of the entire post-World War II financial/monetary order in which the US dollar was made the world’s global reserve currency. If the US dollar’s reign as a global reserve currency ends, what will replace it?

Mr. Carney’s statement calls for a “Libra-like virtual currency.” Notice he did not support Facebook’s Libra virtual currency that Facebook intends to activate in the future. Facebook is a non-bank entity and if it activated its own global virtual crypto-currency, it would create a money system that cannot be controlled by the global central banks or the major governments. Facebook’s Libra money system would be a major global threat to all the world’s banks, their fiat currencies and to global governments. The global banks and governments understand this threat, and they have overwhelmingly opposed Facebook’s new crypto-currency. The first link offers details about Facebook’s proposed virtual currency and the firestorm of opposition it created in the world’s banks and governments. See the second through fifth links (2, 3, 4, 5) for many details and perspectives about the shocking statement made by central banker, Mark Carney, to replace the US dollar with a new virtual currency. In calling for a Libra-like virtual currency, Mr. Carney is not supporting Facebook’s Libra proposed money system at all. He is calling for a new crypto-currency to be created which would be a rival to or substitute for Facebook’s Libra money system. All readers should realize this is a fight about global power. It is about who will control the world’s money system going forward into the future. Mr. Carney, a prominent global banker, is calling for a new virtual money system that will be controlled by the world’s current banker elites. Facebook is planning a new virtual money system that will be outside the control of the world’s banker elites. This is likely to become a titanic battle. Facebook, representing the Big Tech cartel of companies, now possesses more “reach” in the global communication and digital realms than most governments. However, Facebook would be wise to realize it commands no armies. Governments can send in tanks and troops to seize the records and digital files of any company that sufficiently provokes the established governments. Governments can also simply arrest the leaders of the Big Tech companies if they declare an emergency and decide to do so. The Big Tech companies, who dominate the virtual and digital universe, can also likely cause immeasurable harm to the computer information systems of the Big Banks and perhaps even the computerized systems of the military forces of the Big Governments if they decided to do so.

Mr. Carney’s statement was close to a declaration of war against (A) Facebook and the Big Tech companies, and (B) the US Government’s historical mismanagement of the US dollar in recent decades. He may have signaled a desire to “dump the US dollar” as the world’s global currency and substitute it with a new virtual currency controlled by the globe’s central banks. Perhaps it would even be tied into the modern exchange-rate system that links the world’s fiat currencies. There are many possibilities why this unprecedented statement was made. You can be sure the world’s central banks do not want to lose control over the world’s money system. President Trump has been frustrated by the strong US dollar as it keeps the costs of US products high on the global markets. Usually, the US Federal Reserve Bank and the Bank of England march in lock-step as allies. Maybe this statement was orchestrated as an effort to “talk down the dollar” to help the USA in its trade war with China.

While Facebook’s Libra system would surely challenge the control of the central banks over the global monetary and financial system, there is another challenge to the world’s banking system that may also be looming. In recent years, there have been reports that Russia and China have been massively accumulating gold reserves (sixth link and seventh link) and they may join with other nations to institute a gold-backed currency that will become the new global reserve currency–replacing the US dollar. China has already taken preliminary steps to implement such a plan. China controls the Shanghai Metals Exchange which is part of the global gold and silver market. The global prices for gold and silver have traditionally been set by the COMEX in New York and the London Metals Exchange, but China may try to wrest control of the pricing of all gold and silver in the world. In the eighth link is an analysis of China’s effort to do exactly that, and I urge readers to notice the subheading in the eighth link entitled “China Using Gold to Position Yuan as Reserve Currency.” I will offer my thoughts on one way China could attempt to replace the US dollar with a gold-back Yuan.

The New York COMEX, which trades gold and silver and sets prices for these commodities, has a huge problem. It is, essentially, out of gold and silver to back the futures contracts it issues and trades. The extent of the problem is revealed in the ninth link. It asserts that for every 500 ounces of gold that is traded in the futures markets, only one ounce of actual physical gold exists! I suspect the same problem exists in the silver market. Technically, the large traders of gold and silver on the metals exchanges can take delivery of the gold and silver they bought in the futures market when the month of their futures contract arrives on the calendar. However, if only a few traders demand physical gold and silver (instead of cash) to redeem their futures contracts, the COMEX cannot meet the demand. In other words, it would default on the futures contracts. If China, through a number of proxies and third-parties, buys up a large bloc of futures contracts for a particular month when the contracts will come due, all its proxies and third parties could simultaneously demand that their contracts be redeemed by delivery of actual physical gold and silver. If the COMEX cannot provide the gold and silver to the parties demanding settlement of the contracts in physical metals, China could declare the COMEX to be insolvent and call for all future gold and silver contracts to be settled on the Shanghai metals exchange. China would then also “fix” the price of gold and silver on world markets and wrest control of the precious metals markets from the New York and London exchanges. China could arbitrarily set the price at whatever level it desires. Since China (and Russia) are accumulating vast hoards of gold, we can expect them to set the gold and silver prices far higher than today’s levels to enable a gold-backed Chinese Yuan and a gold-backed Russian Ruble to control a very large share of global financial markets. If such a plan was enacted, all other nations would have to scramble to obtain gold and silver metals to back their currencies as well (or they could be required to do business only in the Chinese and Russian currencies). The USA reportedly has a large amount of gold in Ft. Knox, but how much of it actually belongs to other parties and is merely stored at Ft. Knox is unknown. In a global struggle for financial power and control, the US government could nationalize all gold within its borders and simply seize control of all the gold in Ft. Knox, in Federal Reserve and other bank vaults, and all private deposit boxes to back a new US dollar. When governments are desperate to survive, all kinds of actions which are currently unthinkable could be taken to stave off national collapses. The above is speculative, but if something like this ever happens, shooting wars could easily occur among the nations. The big bankers will attempt to retain control over global financial/monetary markets, but the world’s politicians will be more than happy to sacrifice the bankers if necessary to deflect public rage away from themselves to someone else.

While we do not know all the behind-closed-doors reasons why the Bank of England central banker made the unprecedented statement he did, it clearly roiled the global markets. It strongly infers that we are entering a period of instability in global financial/monetary markets that will end in a manner not yet apparent. It may be that the era of post-World War II “normalcy” in the financial markets is drawing to a close.

However, we can know some things about how this crisis will unfold and end. The Bible contains prophecies that were written millennia ago which are coming to pass in today’s geopolitics. Revelation 17-18 foretold that a global financial/monetary crisis would occur during a period known in the Bible as the latter days of this current age. Revelation 18:1-3 prophesies that an insider network of “merchants of the earth” (global multinational corporations) and “kings of the earth (the governmental politicians) which have mutually enriched themselves via corrupt means will collapse on a global scale. It will result in a chaotic situation where the merchants have goods and services to sell, but no one can buy them (Revelation 18:11-14). This sounds like the circumstances that would exist if the world’s fiat currencies suddenly collapsed and there is no trustworthy medium of exchange for purchases and financial transactions to occur. If there is a collapse in the world’s monetary markets, digital commerce will grind to a halt as well. Revelation 17:9-18 reveals that this collapse will not be an accident. A cryptic alliance of “seven heads and ten horns” will act to overthrow the global insider financial/political system and replace it with a new global system led by a new global leader/system called the “beast.” This “beast” system will itself collapse at the end of our age after being in place a mere 42 months (Revelation 13:1-5).

What appears certain is that we are heading into a period of global financial/monetary instability. You don’t need biblical prophecies to understand that reality. However, by understanding biblical prophecies, you will understand a lot more about what is going to transpire in the years ahead of us and knowing the outcome of current confusing events will give you much reassurance. For an in-depth examination of biblical prophecies about these topics, please read my free articles, Are We Living in the Biblical Latter Days?, Is Babylon the Great about to Fall…Ushering in a New Beast System? and The Babylonian Origin of the Modern Banking System. The second article mentioned was written in the aftermath of the global 2008 financial crisis, but its biblically-based information is just as valid today as it was then.

Thanks to a reader for sending me one of the links below.