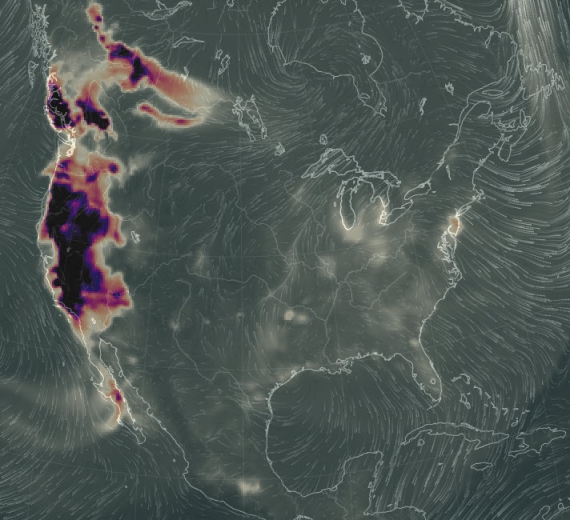 A reader just sent me a link which I thought I’d pass on to everyone who reads this blog. Before passing it on to others, I did a web-search and found another link which corroborated the information in the first link. I checked Snopes.com to do a “fact check” to determine if this information is accurate, but Snopes is silent on this subject, which is of very recent origin.

Reportedly, the two links detail a massive surge in carbon monoxide (CO) levels in the atmosphere over the American West Coast with California being the most affected state. The links relate that after various possible explanations for the spike in carbon monoxide levels are eliminated, one remaining possibility is a geologic explanation. This would mean that the carbon monoxide is seeping into the atmosphere due to geologic activity far below the surface.  The second link cites evidence that a similar carbon monoxide spike preceded a major earthquake in recent history, and the information in the links raises the question of whether this is a prelude to a major earthquake which is about to strike California or somewhere else on the American West Coast. This carbon monoxide spike apparently began suddenly on February 25th and is a very recent development. If you consult the maps on the links, the CO cloud is very massive and of high intensity. Obviously, earthquake prediction is an inexact science so no one can say for sure if this CO spike means an earthquake is imminent somewhere on the American West Coast. However, the first link warns that such high carbon monoxide levels are dangerous to human health even if no earthquake develops and that health precautions are in order. To that end, this post is, at the very least, offered as a public service to readers.

Obviously, I’m not predicting an earthquake, but I’m passing this information on to readers for their consideration. It may be especially valuable to readers living on the American West Coast as the first link lists the symptoms of carbon monoxide sickness and how to recognize it. Again, reportedly, the carbon monoxide cloud is gradually starting to spread eastward across North America. The first link includes a link to an active map which offers a live depiction of the location and intensity of the CO danger region. You can go to this link as you wish to see how far eastward it spreads.

Matthew 24:7 prophesies that earthquakes will occur in various places on earth during the latter days. The American West Coast is a part of the “Ring of Fire” that produces many earthquakes. We’ll have to see if this massive discharge of CO from the earth is a predictive factor for an imminent earthquake or not. I’m only a layman, but if the threat from this CO cloud is as threatening to health as indicated in the links, I’d be taking some cautionary actions if I lived on the West Coast.

No one knows when the long-predicted “Big One” will hit somewhere on the West Coast, but scientists have warned it could happen at any time in our future. Many governmental jurisdictions have warned people living in earthquake-prone regions to make advance preparations for such an event. That is wise advice. This would be a good time to remind readers that one way to prepare for such events is reading my article, Should Christians Prepare for Hard Times? My article addresses both the issue of whether people of faith should prepare for hard times or just “trust God to take care of them” as well as the issue of what preparations should be taken (my article includes a link to the fema.gov website that has an extensive list of items that everyone should have on hand to prepare for emergencies).