California’s Infrastructure Starting to Break Due to Megadrought 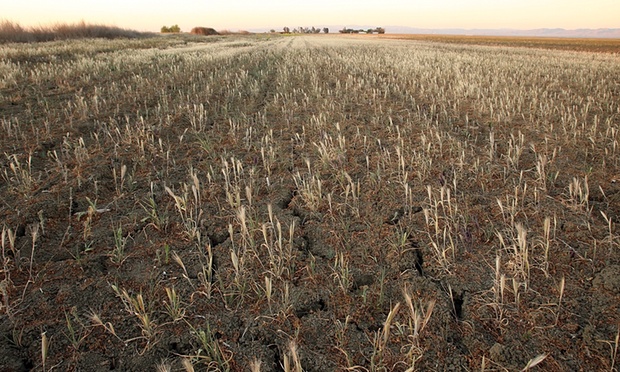 As readers are preparing for the end of 2015 and the beginning of a new year, this post is to offer an update on the consequences of the escalating megadrought afflicting California. Previous posts on this topic have mentioned the land subsidence that is occurring in California due to the excessive pumping of ground water to irrigate croplands. This post offers documentation regarding just how severe this problem is now becoming.

The first link reports that “vast areas of the Central Valley are sinking,” and adds that some areas within a 1200 square mile region of California are sinking at the rate of “2 inches a month.” That translates into the land sinking at a rate of two feet per year! The sinking of California’s land is, obviously, not happening at an even rate throughout the state. Some parts are sinking faster than other locations. This leads to the twisting and damaging of roads, bridges, conduits, utility pipes, and infrastructures of all kinds. This phenomenon is already getting expensive and it is going to get a lot worse. As is noted in the link, the loss of groundwater underneath California is now so vast that a few downpours of rain on the surface, if any are received, will not begin to address the problem of the sinking landmass of California.

The second link adds more information on just how bad the subsidence of land is in the state of California, and it includes a remarkable photograph of a man standing next to a marker which shows where he would have been standing decades ago. It certainly is an example of the truth of the adage: “a picture is worth a thousand words” in showing just how far California has sunk within a matter of decades.

There is also another danger which hasn’t attracted much attention as the media reports on the sinking of California’s land. That danger is: What impact is the sinking of the land mass going to have on earthquake fault lines and tectonic activity in the state of California? Surely as the land collapses on itself, it is going to put added pressure on certain fault lines within the state, which could trigger damaging tectonic reactions. The third link examines the growing risks of earthquakes in the state of California and also discusses the dangers that dormant volcanoes may come to life. It includes maps of the regions which may be most at risk for future tectonic activity. If you live in California or have friends and relatives there, you may want to look at those maps carefully.

It is obvious that if “The Big One” (the subject of a variety of Hollywood movies about massive California earthquakes) hits California in a catastrophic way, it will burden emergency services not just in California, but throughout the entire USA. If a state as large and populous as California is crippled by a massive earthquake or if it is increasingly damaged just from the inexorable effects of the growing drought, refugee Californians are going to need help from all over the nation…and will it be available or not?

The first two links do give the impression that the ground subsidence due to the megadrought and excessive irrigation demands have set in motion an irreversible crisis in California, which produces so much of the nation’s food supply.

Are you preparing for this crisis? Do you live in California? If you do, you owe it to yourself to read my article, Should Christians Prepare for Hard Times? The biblically-based principles in that article apply not just to Christians but to everyone of any faith. They also are applicable to all people, regardless of where they live. This crisis is going to increasingly affect all of us. Most Americans are paying no attention at all to this impending crisis. You need not be among those who are blind to the coming dangers (Proverbs 22:3).