California Is Slowly Sinking Downward [as the Drought Worsens] 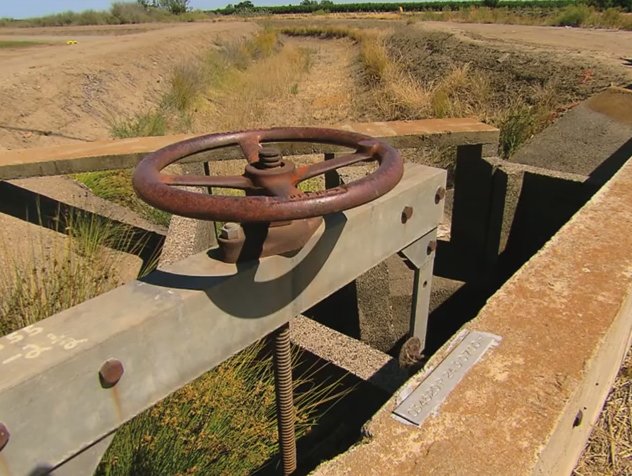 This post is to provide readers with a follow-up to the continuing (and worsening) California drought crisis. While the drought has become very severe, some farmers have stayed in production for the time being by pumping large amounts of water out of sub-surface aquifers. This gives them a short-term respite and helps the USA have a dependable supply of vegetables, fruits and nuts for a while yet, but the excessive reliance on groundwater pumping is causing new problems which could have very severe long-term consequences.

The pumping out of so much groundwater is, literally, starting to cause California to sink downward. Satellite measurements can confirm that parts of California are sinking 2 inches a month (a rate of two feet a year) due to the loss of water from the underground aquifers (see first link and second link). The second link reports that some parts of California have sunk as much as ten feet (!) from their prior levels. That is a profound drop. The links also report that the compression of the subsurface strata may permanently impair the ability of California’s aquifer’s to store water in the future when/if normal snow pack and rainfall levels return to the state. The second link has a good video clip explaining the subsidence problem, but you will have to wait out the advertisement before it plays on your screen.

As the soil levels drop in California, it is all but certain that the rate of subsidence will not be equal in all areas of the state. As parts of the state drop at different rates, this will eventually take a toll on California’s infrastructure, All kinds of water and sewage pipes, utility cables, etc. were installed long ago when the California land surface was at higher (and even) levels. As the land levels drop, the uneven subsidence rates will eventually cause pipes, conduits and cables to stretch, buckle and snap, causing major problems. The danger of sinkholes suddenly opening will also increase. I also wonder if unequal rates of subsidence and subsurface changes on either side of the San Andreas fault lines could heighten the risk of earthquakes. If this severe drought turns into a prolonged mega-drought (as some scientists have already predicted), California could experience a level of problems that is not yet imagined. The entire USA will, at some point, experience a very noticeable reduction in the availability of many food crops if this drought continues.

As I’ve noted in previous posts on this subject, Deuteronomy 28 warns that when a people blessed by the Creator Elohim Being we call “God” sin against him on a chronic basis without any repentance, God will send a variety of national plagues and punishments to try and motivate sinning people to mend their ways. The state of California has been the source of many of America’s national lifestyle sins via its entertainment industry and statewide and local policies to protect what the Bible clearly states are sinful lifestyles. If God is real, then the punishments promised in Deuteronomy 28 should start occurring…and they are. One of the promised punishments is severe drought. Verses 23-24 warn: “And the heaven that is over your head shall be brass, and the earth that is under you shall be iron. The Lord shall make the rain of your land powder and dust: from heaven shall it come down upon you, until you be destroyed (emphasis added).” This process is now underway in California.

If God is behind this developing mega-drought, then it will not end until there is a national and/or statewide repentance of the commission of widespread and growing sins. Lots of people have been force-fed evolution so long that they can’t see the obvious evidence of a Creator God being responsible for making all life on earth. People have also been duped by teachings that the Bible teaches that the earth is only 6000 years old. That is patently false. The Bible teaches no such thing. An age of billions of years for the earth is entirely consistent with a literal understanding of the Bible’s narratives about the creation of the earth, prehistoric times before mankind was present on the earth, etc. For more on this subject, I invite readers to read my article, Is the Earth 6000 Years Old? which is subtitled, When Lucifer Ruled the Earth. This article will reconcile the Bible’s teachings with the scientific facts about the geologic ages of the earth, the dinosaur era, etc. If everyone had the information contained in this article, I think more people would fear God and would repent.

California may receive some rainstorms, but they may not relieve the drought. California needs deep snow packs in its mountain ranges to replenish its reservoirs. Temporary heavy rainstorms could even worsen the state’s troubles as the ground is as “hard as iron” as Deuteronomy 28:23 foretold would happen when Covenant nations turn sinful [my article, The USA in Bible Prophecy, confirms the USA is, indeed, a biblical “Covenant” nation.]. A heavy rainfall on very hard ground could be very destructive, causing washouts of roads, local floods, landslides with large property damage, etc.

As I’ve noted before, if this drought continues to worsen in California (which is mostly a normally arid or semi-arid region) more cities and towns in the state will lose their water supplies and “water wars” will worsen. The warnings that this will happen have already been made. See the third link and fourth link for a list of the cities in California that are most vulnerable to losing their water supplies. Some of the cities are large ones! I’m not being a doomsayer by warning about this possibility. These warnings are in the mainstream media, as the last two links confirm.

What if millions of Californians have to emigrate out of the state to seek water and survival? Hollywood could make an apocalyptic movie concerning how such a crisis could unfold, but it could actually occur in our foreseeable future. Our international news stories are currently full of heart-rending stories about Syrians and many other national groups fleeing the Mideast to try to find refuge and survival in Europe. The EU is having internal problems as some nations are more willing to take refugees than others. Some nations are saying they will only take a certain level of refugees and no more. What if millions of Californians start fleeing the state to seek shelter in other American states or Canadian provinces? Will states and provinces announce that they can only absorb so many drought refugees and no more? Will American states start putting up fences at their borders to keep out California’s drought refugees (like Hungary is now doing at its border with Serbia)? It’s a grim prospect, but if California’s drought continues to worsen and even the groundwater supplies run out, it is only a matter of time until such a similar grim scenario occurs within the USA. If you live in California, be sure to read the last two links to see if you live in a metro area which (according to the water “experts”) is likely to lose its water supplies if the drought continues. If you live in one of the metro areas/cities listed as being most vulnerable to water supply loss, you are at risk.

There are vast tracts of beautiful and expensive California homes whose values will gradually drop to zero if water simply cannot be found to supply those homes. Without the availability of water, homes and cities inevitably become uninhabitable. If I lived in California, I’d consider leaving now.