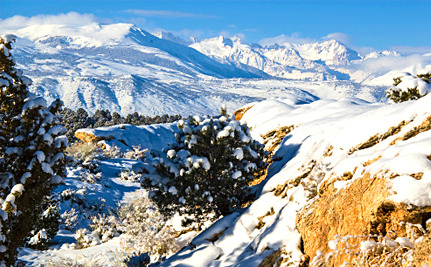 Some readers will have seen an article regarding this topic, but many will not have so it is worth noting this historic milestone about the epic California drought. The climate scientists now have declared this current drought to be the worst one in California in 500 years! Think about the impact of this assertion. This means that California’s current super drought is the worst drought since the approximate time of Columbus, when Europeans began to rediscover the New World when the Dark Ages of massive ignorance and lost knowledge were coming to an end.

This assertion by the scientific community is based on the record low level of snow pack in the California mountain ranges that feed California’s reservoirs and rivers. Obviously, climate scientists have not had rain gauges for the last five centuries to measure the snow pack in California. However, scientists can analyze tree rings and other data to develop a remarkably accurate picture of past wet and dry periods in any regional landscape. The first link and second link document the assertion by scientists that California now is in its driest period in half a millennium. The first link also warns that even if California receives some rainfall from a developing El Niño in the Pacific, it may not help California’s snow pack as the El Niño usually brings warmer temperatures to California so the moisture may come as rain, not as snow. I do wonder: How much worse must this epic drought get before it becomes the worst drought in a millennium or the worst drought ever in the entire discernible historic record in the state of California?

My previous post on this topic warned of the growing danger of ground-water depletion, possible enhanced risks of sinkholes and earthquakes and eventual depopulation of Californian cities due to an inability to locate any water source for their residents. If you have not read that post and you live in California (or have friends who do), I suggest you read the link in that post which lists the cities and metro areas in California which are most vulnerable to losing their water supplies. In recent weeks, we have also seen that wildfires are now raging out of control in more areas of California due to the tinder-dry vegetation.

I have Christian friends who are wondering if this drought is being sent against California by the Creator God for the state’s role in leading the USA into ever-greater sins. I have that same question as well. My previous posts on the subject have noted that if the Bible is the Creator God’s Word (and I believe it is), then the promises and warnings recorded in the Bible do apply to modern mankind as well as any other era of mankind. I have cited Deuteronomy 28:23-24 that God warns Covenant nations descended from the ten tribes of Israel that very severe drought is one of the national punishments that he will send upon such nations when they sin and do not repent [My books document America’s biblical heritage and my article, The USA in Bible Prophecy, gives readers a free overview of that information.] Whether you believe in the Bible or not, it is clear that just such an affliction is now striking the state of California. Most Americans have not yet felt the effects of this drought because their food supplies of fruits and vegetables have not yet been affected. That may change dramatically next year if this drought continues and a lot more farmers cannot get any water to plant their usual crops. If the drought continues, eventually ground water supplies for irrigation will also reach a point of exhaustion.

In truth, we must acknowledge that no prophet of God came on the scene and foretold that this drought would hit the USA or California. However, maybe none was or is necessary. In ancient times, most people were illiterate and they did not have copies of the Bible available to read or hear read by scribes. Indeed, in the ancient kingdom of Judah, the situation got so bad that no one in the nation had any copies of the Bible (some Old Testament books). The king and nation were shocked when a copy of the scriptures was finally found and they realized what dire judgment from God was hanging over their heads (II Kings 22). Modern Americans and the citizens of other nations have no such excuse. Bibles are everywhere all over the USA and in virtually all the languages on the planet. Maybe God does not need to send specific prophets to proclaim imminent plagues and punishments on modern nations. He has already given abundant warnings in his Word and just about everyone has access to God’s advance warnings.

This California super-drought is a growing disaster that we all need to watch carefully. If you live in America and it continues, it will eventually affect your life no matter where in the nation you live. If it continues with its current severity, many parts of the Midwest and prairie states may have to stop planting soybeans and corn and start planting summer vegetables to feed the nation.

As a final thought, I marvel that California is still being so slow to realize the dangers that it faces. If this drought spans more years, California’s cities face depopulation and its agricultural production will collapse. Without reliable water supplies, industrial and technological jobs will flee to other states. I’m surprised the state is not selling bonds to build many, large water-desalinization plants all along its coastline with the Pacific Ocean. Those bonds could be paid off via sales of the fresh water that they would produce so there is no doubt about the future demand for their product. However, Californians would apparently rather just assume things will get back to normal…even though climatologists are warning that this super drought may last for decades. If such predictions prove correct, reality is going to eventually hit…and it will hit hard.