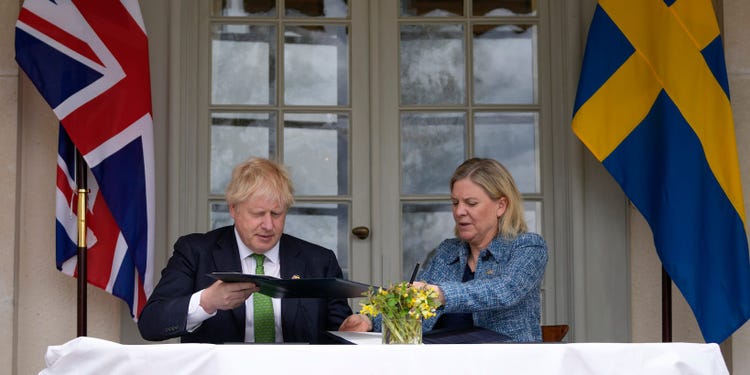 A very important development has occurred in the West’s collective security efforts against Russian invasions. As noted in previous posts, both Finland and Sweden are strongly considering joining NATO. Russia’s attack against Ukraine has surely stimulated them to realize that NATO membership is critical to the security of those two nations. Russia has warned both Finland and Sweden that they face military risks if they seek to join NATO (first link). Since neither Sweden nor Finland is currently in NATO, they cannot invoke Article 5 of the NATO charter which requires collective defense if any single member nation is attacked. However, a wild card was just played in this strategic game of geopolitics.

Indeed, it does seem that both Finland and Sweden will be applying for NATO membership soon (as a previous post discussed), and I have little doubt that their applications will be expedited quickly by NATO. Finland’s governmental leaders have indicated that Finland will be formally applying for NATO membership very soon (fifth link), and Sweden may apply at the same time. The USA has also offered heightened security guarantees to Sweden while it pursues its NATO application, and NATO’s Secretary-General has publicly stated that NATO would welcome Finland and Sweden as member states in the NATO alliance (sixth link).

Personally, I think Russia’s threats vs. Sweden and Finland are mostly bluster, but one never knows for sure what wayward policy Russia’s Putin will pursue. Not long ago I mentioned that if Russia invaded Ukraine, it would run the risk of uniting, expanding and re-energizing the entire NATO alliance. This has happened as NATO nations send high-tech weaponry to Ukrainian forces as well as pledging to greatly bolster their own military spending on new weaponry. Germany has especially come out of its pacifist slumber. It now seems inevitable that Finland and Sweden will join NATO soon, an outcome Russia neither anticipated nor desired. In several previous posts, I also suggested that both Russia and China both needed and wanted a regional war to test their weaponry against Western weaponry and also to see if their military personnel were battle-capable. Russia and China have not been in any serious, major conflict in many years so their military parades show only that their soldiers can do a good job of marching in formation while they are not under any threat. Russia launched an initial war against Ukraine in 2014 when he seized the Crimea and started local battles in the Donbas region of Eastern Ukraine; however, those wars were not real tests of Russia’s ability to fight an all-out war.

Putin certainly started this invasion of Ukraine expecting a quick victory.  He must have been shocked to see his vaunted army repulsed from Kiev and driven out of northern Ukraine. His forces are also stalled in what is currently a war of attrition in Eastern and Southern Ukraine. The Ukrainians, using NATO weaponry, have killed numerous Russian soldiers and littered the countryside with thousands of destroyed Russian tanks and armored vehicles of all kinds (seventh link). I saw a press report days ago which cited a Ukrainian military spokesman as saying Ukraine’s forces had killed 24,000 Russian soldiers (and who knows how many more tens of thousands of Russian soldiers have been wounded or captured). This war has been a colossal failure by Russia and it has shown the world that Russia’s military weaponry is inferior to Western weaponry. Russia has lost so many military platforms and soldiers that the likelihood of Russia starting a new invasion of NATO nations in the Baltic nations or in Poland is lessening with each passing day as Russia continues to lose more equipment. The superiority of the USA’s Javelin anti-tank weapon (and its British and Swedish counterparts) against Russia’s tanks and armored vehicles has been truly amazing. Russia’s entire tank force has been shown to be obsolete in facing NATO anti-tank weapons.

Seeing the very-obvious failure of Russian weaponry against Western technology, China is likely reassessing the advisability of invading Taiwan at this time. China might logically be thinking that their own weaponry might perform no better against American/Western technology than Russia’s weaponry.

As long-time readers of my blog know, I have long asserted, based on the prophecy of Ezekiel 38-39 and other biblical prophecies that a future World War III will begin when Russia, China, Iran and their allies launch a surprise “Pearl Harbor-like” attack against the NATO nations and their global allies. I have never predicted a year in which this will occur, and I certainly will not do so now either. I follow world events to monitor the conditions that will trigger that prophesied war, but my current evaluation is that Russia’s glaring failure to defeat Ukraine means that the Russian-Chinese-Iranian attack against the West will be delayed until that attacking Axis has time to prepare better weapons, command systems and logistical support systems. Vladimir Putin has also made himself and his nation a pariah in world affairs. I do not see a way for Putin to ever recover his credibility, and there is no apparent way Russia can ever be regarded again as a civilized nation as long as Putin leads it.

The Bible’s prophecies have proven to be remarkably accurate in forecasting modern geopolitical alliances and events. To examine the many reasons why the Bible accurately identifies our modern times as the age-ending, “latter day” period of our age, please read my article, Are We Living in the Biblical Latter Days?  For an in-depth research report on what Ezekiel 38-39 and many other biblical prophecies foretell about what will happen among the nations in the years ahead of us, I invite you to read my report entitled, What Ezekiel 38-39 Reveal about a Future World War III. If you do, you will be glad you did when the remaining biblical prophecies are fulfilled before your eyes.