Brexit Update: the UK Has a Hidden “Ace” 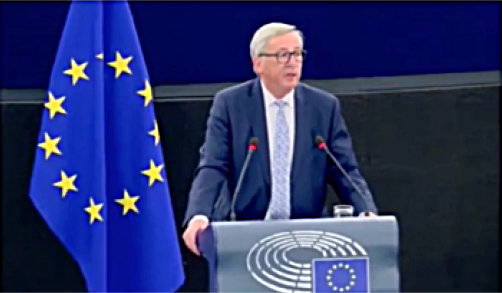 The fractures inside the EU are growing ever larger, and this will have a direct impact on the Brexit process via which the United Kingdom is leaving the EU. EU President Juncker recently gave a speech which, by the accounts I’ve read of it, was characterized by a supra-national hubris that thinks the EU can dictate its demands to all nations in the European region and get whatever it wants to impose on the European nations. Juncker’s vision of the future EU will, I think, horrify a lot of Europeans. Those in the populist or national sovereignty portions of the European electorates will be rejuvenated to increase their opposition to Juncker’s vision of the EU. What does he he envision for the EU? The first link describes his view of a future EU as one which gives itself sovereignty over all its European members with an unelected EU Presidency and government, its own army, etc. In other words, Juncker wants the EU to be an unelected and unaccountable autocracy. This will not sit at all well with European nations who were crushed under and/or led into destructive wars by previous autocracies under Nazism and Communism. Currently, the EU’s leaders are not voted on by the people, but are selected among a small retinue of insider globalists who represent the European “1% ers.”

The first link offers some in-depth views of Juncker’s speech as it transpired. Keep in mind most of those being cited are part of Juncker’s “Amen corner” inside the EU, but the UK’s Nigel Farage is especially blunt when he reacted to the speech by saying the UK’s people can be glad that they are not going to be part of this nascent EU superstate. It does appear that Juncker envisions an EU which will be “of the rich insiders, by the rich insiders and for the rich insiders.”

The ongoing British-EU Brexit negotiations are not going well. The second link documents the sharp differences between the EU and UK positions regarding Brexit. Shockingly, it describes the EU position as being one which demands the UK pay “double” what it would have owed to the EU if had stayed in the EU (if I understand this position clearly). The EU demand is for the UK to pay the EU $90 Billion for the privilege of leaving the EU! That is a non-starter to be sure. That absurd a demand will only harden the British people against the EU in my view. One Tory MP is cited in the article as saying that the UK will owe the EU “zero, nothing, zilch” when it leaves the UK, and a British poll indicates that the British population rejects paying even $20 billion to the EU as it leaves. You can be sure all UK politicians noticed that poll’s results.

The third link and fourth link list how much money is paid into and received by the various EU member states. These articles document that the UK pays more into the EU’s coffers than it receives. If the EU imposes arrogant and absurd terms on the UK when the deadline is reached for the UK’s departure, the EU may find that it will receive nothing at all from the UK. I’ve seen reports that the EU wants to appeal the Brexit “divorce” settlement to the European High Courts, but there is a problem there. Once the UK leaves the EU, the European Courts of the EU will have no jurisdiction over the UK. The UK is a nuclear power with its own military forces, and it will be subject to its own High Courts after the Brexit deadline is reached. How many troops does the EU have to enforce its position upon the United Kingdom? Oh, the EU has no troops at all. Well then, when “push comes to shove,” that means the UK will have all the ultimate high cards when the Brexit deadline is reached. The EU and its in-house courts cannot enforce any of their decisions upon non-member states, and the UK will be a non-member state after the Brexit deadline is reached. It seems to me that the EU needs to be more reasonable in its attitude about post-Brexit realities. The UK holds a hidden “ace” in the Brexit process. When the Brexit deadline comes, the UK, if it does not like the final terms of the separation, can simply refuse to pay anything to the EU.

Indeed, Juncker’s autocratic vision of a future EU and his speech is surely alienating many people within European nations. One nation which is increasingly at odds with the EU goals espoused by Juncker is Poland. Poland is not happy at Juncker’s plans for an autocratic EU to which Poland must surrender its national sovereignty. Poland (and all the former Warsaw Pact nations in eastern Europe) prize their national independence after being freed from the Soviet/Russian yoke. They have no desire to replace that former yoke with a new yoke imposed by an autocracy led by the Brussels-based EU. The Polish-EU dispute reached a high point last year (see fifth link and sixth link) when the Polish Government rejected Juncker’s calls for a stronger and more centralized EU. Juncker’s recent speech is likely to inflame the Poles against the EU even further. Poland essentially leads the Visegrád Four nations (Poland, Hungary, The Czech Republic and Slovakia) which are by no means monolithic, but are increasingly united in their opposition to the EU’s diktats. Juncker’s harsh tone in his recent speech is likely to increase their disgust at the EU.

This is not just a tempest inside Europe. The EU is one of the most important globalist institutions via which the world’s insider elites preserve their own power and control their populations. The Bible calls this globalist power structure (of which the EU is just one part) by the name “Babylon the Great” and it prophesies in Revelation 17-18 that it will suddenly collapse in the latter days with catastrophic financial/monetary/commercial/political consequences. This blog has examined many possible triggers which could initiate the fulfillment of this key biblical prophecy. There are many possible triggers which could cause the interconnected global markets to collapse quickly in a cascading failure. It could be the fall of a major money-center bank, the collapse of the global derivatives market, the introduction of gold-backed currencies by Russia, China, Iran and other nations, the collapse of the petrodollar market, etc. I think we should add the hubris of the inner circle of the EU as one other possibility in causing such a collapse. Revelation 18:10 and 19 prophecy this collapse of the reigning global financial/political system on earth in the latter days will occur in “one hour.” This was obviously long thought to be metaphorical in its meaning. However, with the sophistication and interconnection of all digital markets, a severe collapse in one part of the global market could trigger a cascade of inter-party risk failures which leads to a global shut-down of the world’s institutions and power structures as we now know them in just one hour. How could the Bible have known an and-of-the-age global financial collapse could occur in just one hour unless this prophecy was inspired by a Creator Being who could know and control the world’s future events, just as the Bible’s God declares he can do (Isaiah 41:21-26, 46:9-11).

For more in-depth information on the above topics, please read my articles, Are We Living in the Biblical Latter Days?, Is Babylon the Great about to Fall…Ushering in a New Beast Power? and The Babylonian Origin of the Modern Banking System. If you read these articles, you will be surprised at just how accurate biblical prophecies really are.

I thank a reader for sending me one of these links!