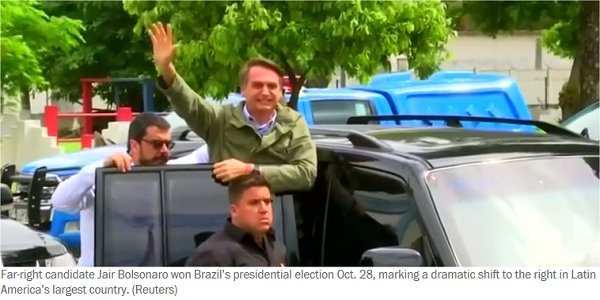 Brazil has been ruled by leftist/socialist, globalist governments for decades. Under those governments, chiefs-of-state were impeached or jailed and corruption became widespread in Brazil. The economy had tanked and gang violence and crime mushroomed. Brazil’s murder rate was reportedly up to 64,000 per year in one media report I read. In the final round of the election which was just held, a right-wing nationalist named, Jair Bolsonaro, was just elected president of Brazil by a very decisive margin. His critics in the media and on the left portrayed him as a candidate who was far too rightist to be elected, but the Brazilian voters elected him anyway. The first four links offer various international perspectives on Mr. Bolsonaro’s crushing win and what it means for Brazil’s future. Mr. Bolsonaro surely won respect from the voters when he was attacked and stabbed in the abdomen in an assassination attempt during the campaign, but he lived to continue running for Brazil’s presidency.

I had hoped to add links to two excellent Wall Street Journal (WSJ) articles in this post, but they are available electronically only to subscribers. However, I bought a copy of the October 29th WSJ at a newsstand and will offer some quotes from them for reader’s benefit. One, entitled “Ex-Captain Wins Presidency, Sending Brazil to the right” stated that Bolsonaro’s victory was “mirroring both the rise of anti-establishment politics and populist nationalism around the world,” and that his rise “stunned pundits and rivals…” This article adds that Mr. Bolsonaro’s solution to the out-of-control crime problem will be to give “carte-blanche” authority to law enforcement officers “to kill suspected criminals and arm civilians for self-defense.” Mr. Bolsonaro’s pro-traditional values, pro-gun, anti-gay, pro-property rights campaign also attracted great support from the Brazilian evangelical Christian voters (which the article asserts are now 1/3rd of Brazil’s voters). A columnist, Mary Anastasia O’Grady, wrote in the same WSJ issue that Mr. Bolsonaro’s political and media opponents labeled him “a racist, a misogynist, a homophobe, a fascist, an advocate of torture and an aspiring dictator.” She also wrote that a corruption investigation in Brazil “revealed a callous political and business elite that teamed up to enrich themselves.” That language seems torn right from the prophecy in Revelation 18:3 that in the end-times of our age, a cabal of political and business leaders (“kings of the earth” and “merchants of the earth”) will “wax rich” by being insiders in a global insider elite called “Babylon the Great.” In the USA, this insider network of self-serving globalists is called “the Deep State” or “the swamp.” Ms. O’Grady’s columns also asserted that Brazil’s socialist insiders had been supporting the dictatorships in Cuba and Venezuela.

Many long-time readers of this blog will see the continuation of a familiar theme being acted out on the geopolitical stage of world events. Revelation 17-18 prophesies that a cabal of corrupt, self-indulgent global elites called “Babylon the Great” will be overthrown at the end of our age by a cryptic alliance called “the seven heads and ten horns” (Revelation 13:1-5, 17:9-18). This cryptic alliance of “seven heads and ten horns” will install a new global system that biblical prophecy calls “the beast” system. This beast system will hold sway over the world for a mere 42 months (Revelation 13:5) before it is itself overthrown by the return of Jesus Christ and his heavenly army (Revelation 19:11-20:4) who will establish a millennial utopian rule on earth. When the current “Babylon the Great” global system collapses, we can begin the 42-month countdown to the return of Jesus Christ as soon as its successor “beast” system is installed.

Mr. Bolsonaro’s smashing victory is good news for those who are trying to overthrow the power of the entrenched global elites. The world’s nationalist parties are beginning to win a string of major victories and the globalists are losing more nations who were once dominated by them. Based on what I’ve read, Mr. Bolsonaro will likely get along well with President Trump and the USA as Brazil joins Chile, Argentina, Paraguay and Colombia in the growing list of Latin American nations which have turned to conservative/nationalist governments.

There is no doubt where President Trump stands in this competition between the globalists and nationalists. In the final link, President Trump rejects the globalists in a video clip of one of his rallies, and declares flatly that he is a “nationalist.” As the nationalists gain strength globally, I regard this trend as evidence that we are, indeed, nearing the fulfillment of major biblical prophecies and that the ultimate fall of “Babylon the Great’s” globalist insider system is drawing steadily nearer. Biblical prophecy is being fulfilled in remarkable precision in modern events, but the world–which is almost totally ignorant of the Bible’s content–does not see it happening.

For an in-depth examination of the above biblical prophecies and how they are being fulfilled in modern geopolitical events, please read my free articles, Are We Living in the Biblical Latter Days?, Is Babylon the Great about to Fall, Ushering in a New Beast System? and The Babylonian Origin of the Modern Banking System.