BORIS JOHNSON READIES THE UK FOR A REAL BREXIT 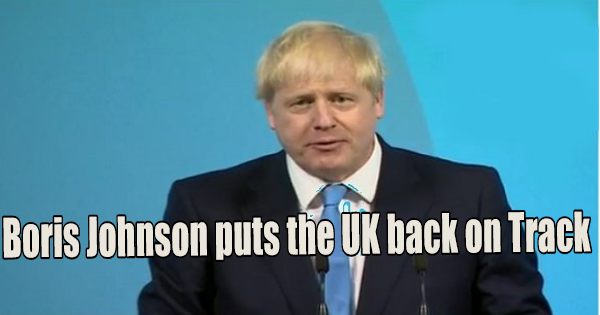 Now that Boris Johnson has become the new Prime Minister of the United Kingdom, his first moves are revealing the policies his government will pursue. The contrast to Teresa May’s government could scarcely be more, stark. While May’s government was pro-globalist and pro-Remain, Johnson’s government will be nationalist and fiercely pro-Brexit. May only pretended to “deliver Brexit.” Her “deal” with the EU would have left the UK a mere colony of the EU, and it would have yielded effective sovereignty to the EU instead of the House of Commons. If May’s deal had been approved, I think it would only have been a matter of time until the EU ordered the UK to yield Gibraltar to Spain, Northern Ireland to Ireland, surrender its nukes to the control of the German-dominated EU, etc. Within a few years, world observers would likely have thought Germany had won World War 2. Things have changed greatly with the rise of Boris Johnson.

The first link details a series of changes that can be expected under Boris Johnson. He is serious about either leaving the EU by October 31 with a new and fair deal with the EU or via a no-deal Brexit. Johnson is also likely to have a more muscular foreign policy and be much more closely allied with the USA than May’s government ever was. Johnson is likely to build more British “hard power” (i.e. military power) and could well join the USA is rejecting the now-moribund nuclear deal with Iran (which was another surrender “deal”). Johnson’s purge of Tory Remainers from key cabinet positions confirms that he intends to be surrounded by people who will help him implement his pro-Brexit agenda. It also shows that despite his rather frumpy persona, he is a shrewd politician (second link).

Johnson’s demand for a better deal from the EU has elicited the usual “we won’t renegotiate the deal” chorus from EU officials and Europe’s top globalists. However, Johnson is willing to play high-stakes poker with the EU. Johnson’s position is that the EU must either negotiate a new and fair deal with the UK or the UK will leave on its own on October 31. Johnson is also on record as saying that if the EU remains intransigent in its position, it will not receive the $39,000,000,000 Euros that May’s deal would have required the UK to pay to the EU for the privilege of becoming an EU colony (third link). That amount equals approximately $50,000,000,000. That’s real money! The EU has reacted haughtily to this position of Boris Johnson and warns of dire consequences if the UK decides to keep its own money as it leaves (fourth link). The fifth link adds another perspective on this issue, warning that trade issues will not allow Johnson to withhold the “exit tax” the EU is trying to impose on the UK. I think it is worth pointing out that the EU’s own rules do not set any mandated Euro amount for an “exit tax” for nations that opt out of the EU. The EU will also come under intense pressure from businesses within the EU to make a better deal with the UK as many EU businesses will go broke if they lose their share of the British markets. The EU may only succeed in driving the UK to make a host of new trade deals with the USA and nations that used to be part of the old British Empire (Canada, Australia, New Zealand, India, South Africa, etc.). By refusing to negotiate a fair deal with the UK, the EU may end up “shooting itself in the foot” and prompting more nations to exit the EU…while they still can.

Johnson is also smart enough to realize that in the event of a new national election (which is possible as the Tory majority in the House of Commons is very slim), he must broaden his government’s support on domestic issues as well as on the Brexit matter. To that end, he has already proposed adding another 20,000 police officers to combat a crime problem which includes frequent stabbings in London and other areas (sixth link). As a former popular Mayor of London, Johnson still has a strong awareness of what it takes to win over London’s voters. Londoners (and all citizens of the UK) want to be able to walk the streets and go about their business without fear of being stabbed by random assailants. Johnson’s determination to be a “law and order” Prime Minister should win him substantial numbers of votes on the home front.

While the Remainers in the UK desire to thwart Johnson’s Brexit plans by various desperate strategies, the fact remains that the UK’s departure from the EU is governed by EU rules, not the whims of the party caucuses in the House of Commons. The remaining crowd can huff and puff all they want, but the default legal reality is that unless the UK and the EU agree to another ad-hoc delay after October 31, the UK leaves the EU on that date…with or without a deal. It is clear that Johnson’s government is not going to agree to any new ad-hoc extension of time. May’s government was basically a Vichy-type of government that was subservient to its EU masters. Under Boris Johnson, the United Kingdom has a real government again. This changes everything. A frequent commentator on the world scene and a spokesman for the globalist viewpoint, Fareed Zakaria, is warning that the impending Brexit departure of the UK from the EU and other factors argue that it is the EU itself which is now in decline (seventh link). I believe he is right.

Whether mankind and the world’s leaders want to acknowledge it or not, there is a Creator God who rules over the overall course of events on this earth. He once drove a self-exultant leader of the Babylonian Empire, Nebuchadnezzar, mad for seven years to prove his point that human leaders serve at his pleasure according to his divine purposes. This is a fallen, sinful world, but God does intervene as needed to ensure that his prophetic will gets fulfilled no matter what mankind wants. His ability to implement biblical prophecies is a major proof of his sovereignty and reality (Isaiah 41:21-26, 47:10-11). The Bible declares that God will put people into power to do his will on the earth as needed at key junctures in time (Daniel 4:25, 32) and that he will direct the minds of national leaders to do what God has decreed will happen (Proverbs 21:1). I think God has just done that in preventing the globalists from dismantling the UK and making it a colony of the EU.

There is a prophecy in the Bible that supports the view that God put Donald Trump into the US White House and that he also has put Johnson into No 10 Downing Street. God inspired a prophecy in Genesis 48-49 approximately 3700 years ago that the descendants of the tribe of Joseph (Ephraim and Manasseh) would inherit the great blessings promised to the patriarch, Abraham, during a climactic period in world history called the “latter days.” That prophecy is found in Genesis 49:1, 22-26, and it prophesies that these two “birthright” tribes would be hated and attacked, but that God would strengthen them against their attackers in the latter days. Many Bible prophecies indicate that all nations on earth would be sinful and in a state of accelerating social decay in the latter days. The Israelite nations were not exempted from that prophesied condition. Nevertheless, God promised he would strengthen the tribes of Ephraim and Manasseh in the latter days against those who try to bring down the modern nations descended from those two Israelite tribes. Both the USA and the UK were in a state of accelerating decline by 2016. If Hillary Clinton had been elected and if the UK had not voted for Brexit, the USA and the UK would be in eclipse on the world stage as the globalists would have worked through a Clinton administrator and a pro-EU administration in London to weaken those two nations to serve the globalists’ agendas. The world was shocked when anti-globalists rose in the USA and UK to avert the globalist’s plans.  The globalists would have, to put it in biblical terms, have stolen Joseph’s birthright if Clinton had been elected and the Remain side had won the Brexit vote. The globalists were so close to seizing control of the UK during the May government. However, a far stronger power than the globalists kept their plans from succeeding. God decreed in Genesis 49 that the birthright would “Remain” (pun intended) with the tribe of Joseph in the latter days. Whether you believe in the bible or not,  the fact remains that the USA (Manasseh) and the UK (Ephraim) are both under nationalist leadership for the foreseeable future.

If readers would like proof that we are living in the biblically-prophesied latter days, I invite you to read my free article, Are We Living in the Biblical Latter Days?  For evidence that the American and British peoples are the tribes of Manasseh and Ephraim in the modern world, please read my free articles, The USA in Biblical Prophecy and The Tribe of Joseph in the Latter Days. You could also obtain copies of my books advertised on this website’s homepage which examine this subject in thorough historical detail…citing both biblical prophecies and abundant secular historical evidence. The latter article is dated in its contemporary time context, but the biblical truths cited are just as applicable today. For a glimpse into what God has decreed is going to happen on the world stage in our future, please read my free article, Is Babylon the Great about to Fall…Ushering in a New Beast System?