Book Review: a New Novel about a Chinese-Russian Attack on the USA 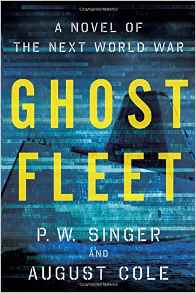 As long-time readers and friends know, I have been warning for over a quarter century that the prophecy in Ezekiel 38-39 of the Bible foretells that an alliance led by Russia, China, Iran and their allies will, in the “latter days” of our current age (Ezekiel 38:8, 16), attack an alliance of nations that include the USA, the NATO nations and their global allies. The prophecy reveals that this will be a “Pearl Harbor” type of surprise attack. My posts have been addressing geopolitical and military trends and developments which indicate that this attack is drawing steadily nearer. Russia, China and Iran are in aggressive militarization programs while the Obama administration is steadily disarming the USA and reducing our uniformed armed forces and military platforms. Now the likelihood of a Russian-Chinese attack vs. the USA is getting so obvious that even secular novelists are writing stories about how such a war will unfold. This post is about an excellent book which I have just read about a coordinated future Chinese-Russian attack vs. the USA.

The book is entitled Ghost Fleet, and it is written by P.W. Singer and August Cole, and it depicts how this attack could unfold in a few years when the world becomes even more dependent on digital and virtual technology. The first link and second link have book reviews with positive recommendations for this book. The second link is from the navytimes.com website which terms the book a “realistic scenario” given today’s level of technological development. While the book’s cover header states it is “A novel of the next world war,” that is somewhat of a misnomer as the Chinese-Russian attack is not an all-out invasion of the entire USA and its allies, as Ezekiel 38-39 prophesies. This book depicts a limited war in which China seizes control of the Pacific Ocean, including such US possessions as Hawaii, to impose its dominance upon the USA and compel the USA to sell resources to China according to China’s desires. The simulated war begins with a reprise of the opening of the Second World War in the Pacific. The Chinese easily conquer the Hawaiian Islands in a scenario that is all too plausible. China also knocks out the entire GPS system and all military communications satellites of the USA at the start of the war even as it infiltrates the USA’s most sensitive facilities with a cyber-attack. The Chinese attack wipes out all US naval ships in Pearl Harbor except for one vital ship which escapes to the US mainland. The book also, quite presciently in my view, includes a warning about the US military relying on any computer chips made in China. In the book, while China attacks and conquers Hawaii, Russia wipes out US military assets in Japan in a surprise simultaneous attack there.

In the book, the USA’s reliance on high-tech weaponry turns out to be an Achilles Heel, not an advantage, because high-tech, digital weaponry is easily hacked. The book includes descriptions of novel ways that US military units will be able to communicate with each other via low-tech methods when high-tech methods are knocked out or are suspect. The book also includes the latest in high-tech weaponry and surveillance methods, including many which I’ve posted about in this blog (cyber-attacks, rail-guns, mechanical drones disguised as living creatures, armed and surveillance drones, anti-satellite weaponry, etc.). The writers of this book clearly have a very good understanding of where modern technology is headed as they include types of weaponry and high-tech gadgets that I would never have dreamed of before reading this book. Those of you who like to follow cutting-edge digital and high-tech developments will really enjoy this book. I won’t give away much of what is contained in the book, but will comment on a few of its technological projections which are already being developed. Regarding cyber-attacks, the third link addresses the issue of just how extensive the Chinese cyber-attacks already have been. The book includes segments where virtual reality techniques also will have a role in future warfare (the fourth link describes the current status of some virtual reality applications).

All US military and governmental leaders ought to be required to read this book to create methods to counter the manner of a Russian-Chinese attack as detailed in this book. You can be sure the top military planners in China and Russia will read this book and fine-tune their attack plans for the real invasion which Ezekiel 38-39 prophesies will occur at the very end of our age.

One strategy used by the Chinese invaders of Hawaii in this book is the use of militarized Chinese civilian merchant ships of all types. One projected invasion technique was to use Chinese RO-RO ships (“Roll-on, Roll-off”) to secretly transport military cargoes (tanks, armored vehicles, armored drones, etc.) to Hawaii instead of civilian cargoes. The fifth link and sixth link confirm that China is already converting its civilian ships to be able to serve military purposes. Indeed, the sixth link reports thousands of Chinese merchant chips are being adapted to quickly be re-assigned to military purposes. The use of weaponized drones is also featured in the book. The weaponization of drones is already being done. The seventh link and eighth link show how easy it is to use quad-rotor drones to carry guns and explosives to attack any kind of target.

Unlike the limited Pacific Ocean and space war that is depicted in the book, Ezekiel 38-39 prophesy that Russia, China, Iran and their allies will attack North America, the NATO nations and their global allies in an all-out war of conquest. Ezekiel 38:15 reveals this attack will come mostly from out of the north. During the Cold War, the USA always expected any Soviet nuclear or conventional attack to come “over the pole” from the north. The two movies entitled “Red Dawn” did as well. Visualize how quickly Russian and Chinese armored infantry divisions could attack southward into Canada and the USA if their Spetnaz-type forces suddenly seized control of Alaskan ports and airfields and they were used to send Russian and Chinese troops, warplanes and armored vehicles into Alaska and deploy them southward as soon as they arrived? Alaska used to be a Russian colony before they sold it to the USA. The Czar’s government surely mapped the Alaskan tidal flows and currents so Russia’s current rulers doubtlessly know exactly where gigantic RO-RO ships could unload all over the Alaskan coastline, deploying enemy forces right into North America’s northwest corner and sending them southward to Canada and the USA. Canada would be conquered quickly as its citizens can’t fight back as the Canadian government has disarmed them. A 24/7 sea- and air-lift of Russian-Chinese weaponry and troops into Alaska could deploy massive armed forces into North America very quickly. Ezekiel 38:16 prophesies that the invading forces will be so numerous they will be like a “cloud” coming through the sky from the north. That means transport aircraft will deliver lots of weaponry into Alaska along with the forces being deployed via militarized RO-ROs. Much of America’s armed forces are stationed abroad and could not help repel such an invasion. As Russia, China and Iran rapidly increase their military forces to fulfill this prophecy, President Obama wants to disarm America even more and reduce its military forces even further. Unlike the book where China and Russia do not attack North America, when Ezekiel 38-39 is fulfilled, they will surely send salvos of cruse and ballistic missiles into the ports where US navy reserve fleets are located and into the “boneyard” in the Arizona desert where thousands of retired US warplanes are parked. All US naval ships and USAF airfields will be targeted by cruise or ballistic missiles and saboteurs in the opening minutes of this future prophesied war. What will be left of the US military to oppose the invasion forces? Will the NRA be the only force left? Ezekiel 38:21 foretells God calling all the citizenry of all the attacked latter-day Israelite nations to use their national and personal weapons and fight back. Do we ever need a US president and administration that appreciates the major danger of a Russian-Chinese invasion of North America through Alaska. The USA is far more vulnerable than it realizes.

I want to offer a bit of hope in all this prophetic gloom. When the Ezekiel 38-39 attack occurs (I never predict the year when this will happen), Ezekiel 39:3 foretells that many of the “bows” and “arrows” of the Gog-Magog alliance will not work correctly. In applying ancient low-tech language to modern weaponry, “bows” would apply to missile launchers and platforms and “arrows” would be missiles of all types. [It is easy to identify modern tanks, warplanes and attack helicopters in the prophecy of Revelation 9 as the Apostle John also had to use ancient low-tech words to describe modern weaponry he saw in a vision of our time.] Both sides can play at the game of cyber warfare. The USA and UK (Manasseh and Ephraim in biblical terms) have excelled in disinformation and information interception techniques. In World War II, the British read the secret German “Enigma” codes for years and the USA broke the Japanese naval codes early in the war. We have seen many media stories about how easy it is for Russian and Chinese hackers to obtain military information from US and NATO computers and data banks. I wonder how many of those hacking efforts actually downloaded destructive viruses and Trojan Horses that American and NATO intelligence and military services have “arranged” for the Russians and Chinese to “steal.” One plot of my favorite TV show, NCIS, featured just such an effort to feed flawed information to the Russians. I also wonder how many logic bombs have been planted into the new Chinese missiles and warplanes via US and defense industry weapons schematics and plans that China stole. These logic bombs could have been designed to sit passively and undetected until the new Chinese weapons systems actually try and fire in a real war. An electronic signal sent from air, land or space could activate such logic bombs to cause Chinese or Russian weaponry to malfunction. That’s just a thought on how Ezekiel 39:3 may be fulfilled. The USA appears to be helpless in defending its digital technology vs. Russian and Chinese hackers. Maybe US war-planners have also read Sun-Tzu’s The Art of War. Didn’t the famous Chinese strategist also write: “When you are strong, feign weakness.” It is a matter of record that when the Iranian nuclear facilities had to be slowed down, the USA and or Israel easily inserted electronic and digital havoc into the Iranian facilities despite Iran’s best efforts to defend against such attacks. Indeed, one chapter of the Ghost Fleet book includes a description of very sophisticated Chinese electronic infiltration method used against a US intelligence agency that could have been a method via which the Stuxnet virus was inserted into Iran’s nuclear-related computers. I think its OK to mention this possibility because every intelligence agency in the world will be, or already has, read this part of the Ghost Fleet book so this infiltration method has already been revealed in the public domain.

Do yourself a favor. Read the Ghost Fleet book. However, as you do, visualize the attack on Hawaii happening all across North America as the same time. That is what Ezekiel 38-39 prophesied over 2500 years ago, and the technology and transportation modes are now available to fulfill this prophecy. Only a Creator God could have foreseen the future alliances, geography and technologies of our time so accurately.