“Bio-Bots”–a First Step Toward an Army of “Borg” Drones? 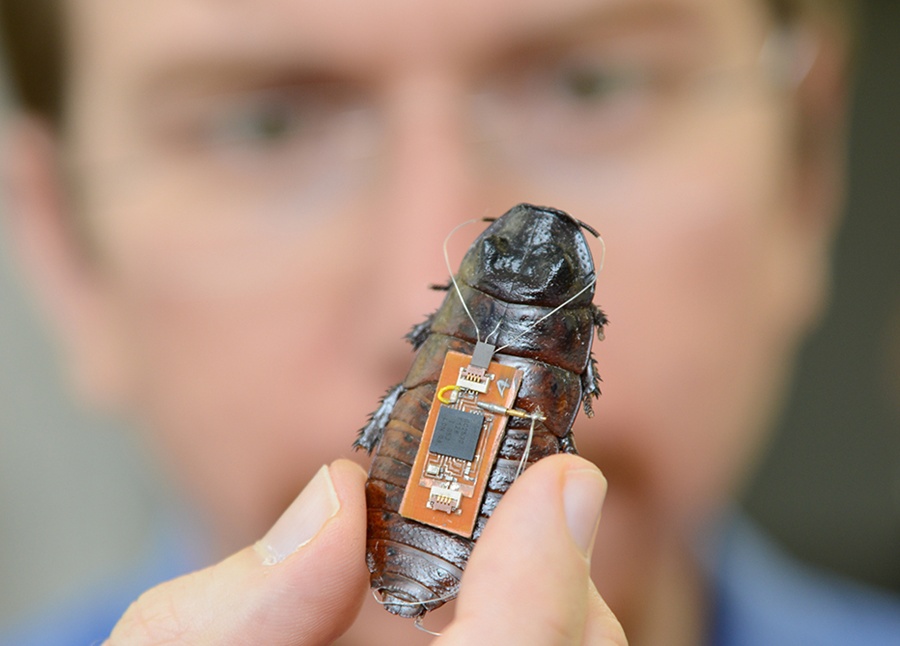 Get ready for the deployment of a new high-tech development that has both civilian and military applications. The April 2016 issue of Discover Magazine has an article entitled “Biobots, Roll Out!” which calls these organic/mechanical hybrids “Bio-bots.” These are living things which have been implanted with cybernetic implants to make them controllable. I wanted to share the entire article with readers, but cannot do so as only subscribers can access the full article. The first link has the “teaser” information which invites readers to become subscribers so they can access the articles. I already subscribe to the magazine, so I have full printed access to the article. Since it is available to the general public on some newsstands and libraries, I will cite limited information from the article to at least give readers a description of this new science-fiction type development.

The article mentions that this “Bio-bot” program was backed financially by DARPA, the Defense Advanced Projects Research Agency, which funds cutting-edge technological projects which generally have military applications. The article states that scientists have already been able to integrate technological implants into moths and roaches which enable human controllers to manipulate and control the organism’s flight patterns and behavior. One source is quoted as saying “There’s no struggle–hacking the moth’s motions is seamless.” How comforting. I think we can assume that scientists will be attempting to integrate mechanical control implants into far higher life forms than insects. The article also mentions using mechanically-controlled life forms in a “swarm” method for applications over a large area. Hmm. Why is it that that term triggers in my memory the phrase “hive mind” from Star Trek movies and television series involving the Borg, a “swarm” of millions of assimilated beings from all kinds of fictional space races who were forcibly integrated into the Borg “hive mind” by having cybernetic implants involuntarily placed into their heads and bodies.

The Discover article only discusses the forcible placement of cybernetic implants into moths and roaches at this point, but I think we all know that this is only a first step into far more advanced applications of this technology. Discover magazine is an excellent publication with good articles. I had hoped to share this article with all readers, but for those who are not subscribers, I’d suggest reading this article at your local library or buying a copy of this issue at a newsstand to obtain the whole article’s information.

In trying to come across more information on this topic, I did locate the second link and third link, which were from 2014. The second article discusses the military applications of this technology–developing human cyborgs who could serve as soldiers in a future war environment. The second link assures us that: “Computer controlled by a living person, total military augmentation won’t be too far away in the future (emphasis added).” That was written in 2014. That indicates to me that the actual state of developing organic/mechanical hybrids is very likely much further advanced than merely working with insect species–as the first link admits can easily be done already. Clearly, that remark foreshadows a time when soldiers cold become cyborg “drones” who are operated electronically by a distant controller, much like modern US Air Force drones are used to surveil or attack targets on the ground.

The third link visualizes a future where in every army brigade with 4,000 soldiers that 1,000 of them will be cyborg drones. Perhaps the future of warfare will involve “Borg”-like combat drones fighting on futuristic battlefields. Integrating 3-D imaging and artificial-intelligence technology into these drones might enable them (or their controllers) to be “linked” in a “hive mind” which would enable the drones and their controllers to all “see” the battle through each other’s eyes for real-time battlefield awareness at all times. Sounds a lot like the “Borg,” of Star-Trek fame, if you ask me. Where will future governments obtain the humans to be the controlled cyborg soldiers for such military service? It’s hard to imagine anyone volunteering to be a “Borg” drone. Perhaps criminals or missing persons or homeless people and refugees assimilated into the process will serve as involuntary drones to be controlled by remote humans manipulating their behaviors.

Am I the only person who finds the possible applications of this technology to be a bit scary? It reminds me of Genesis 11:6’s statement that, millennia ago, mankind reached a tipping point of knowledge development where “nothing that they imagined will be restrained from them.” God did mankind a favor at Babel by stopping mankind’s re-development of pre-Flood technologies “in its tracks” by divinely making them all illiterate with only a new spoken language that most other humans couldn’t understand. However, Daniel 12:1-4 and Matthew 24:37 reveal that in our latter day period of prophetic time, God is not going to stop mankind’s technological development. He is going to let it develop into a parallel of the hopelessly sinful pre-Flood society which was also incredibly advanced in its technology. As modern mankind advances technologically, it is also sinking deeper and deeper into moral sinfulness that would have been unimaginable just a couple decades ago. We are going to learn more about what the pre-Flood society was like just by watching what happens to modern mankind in the years ahead of us.

This new cybernetic technology brings another prophecy to mind. When the beast system of the latter days is finally unveiled, the world will be amazed at military technological systems that the beast will have at his disposal. Revelation 13:1-4 foretells that the world will marvel at what the beast unveils and say, “Who is able to make war with him?” This question clearly indicates that super-advanced military technology will be unveiled that no one knew existed. Will one of those technologies be a cyborg army? The second and third links allow for that possibility.