BIDEN’S ACTIONS MAY CAUSE A MIDEAST WAR 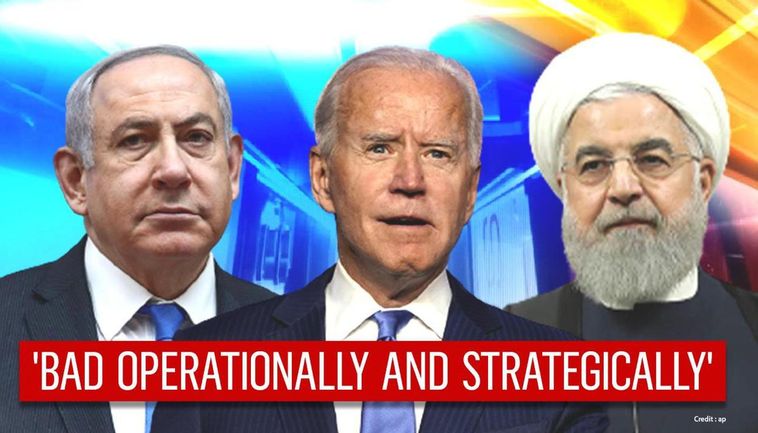 As readers may have seen in media reports, US President Biden has announced he intends to reactivate the USA’s membership in the nuclear treaty a number of western nations signed with Iran. President Trump had withdrawn the US from the treaty because it was harmful to the security interests of both the USA and Israel. Biden’s intended action would raise the risk of warfare in the Mideast, according to remarks made by the Israeli Defense Chief, Lt. General Aviv Kovchavi. He stated that Biden’s intended action would be “an unacceptable threat and will lead to nuclear proliferation across the region (first link).” He added that Israel was upgrading its military operational plans to do a preemptive strike against Iran if necessary. The second link offers an additional perspective on the general’s remarks, in which he also stated that “Israel’s military would be prepared to attack [Iran] on its own if needed (emphasis added).”

Israel is not bluffing. Iran’s state policy is to “wipe Israel off the map,” and the Israeli nation is determined that “never again” will Jews stand by helplessly and be exterminated by Iranian nuclear weapons or anything else. Israel has every right to defend itself against the terrorist threats posed by Iran. Any nation on earth would be preparing to do a preemptive strike against any other nation that announced it wanted to render some other nation extinct. You can be sure that the Israeli military chief would not have made such blunt comments unless Israeli Prime Minister Netanhayu had first approved them.

Notice the major change in tone now that Trump is no longer in the White House. Under Trump, Israel could count on America’s backing against Iran. That is no longer the case under Biden. The Israeli general’s statement that Israel would act “on its own if needed” was a clear warning to Biden that Israel can and will attack Iran without US help if necessary. Israel has served notice to the Biden administration that the USA has no “veto” over Israeli actions vs. Iran. However, while Biden might betray Israeli security interest, I don’t think Israel will have to attack Iran without allies, if such action becomes necessary.

The third link and fourth link describe a strikingly foolish action by the Biden administration. Even though the USA had an agreement with the United Arab Emirates (UAE) to sell it US-made F-35 warplanes, Biden peremptorily halted that sale which was part of the Abraham Accords Mideast peace deal midwifed by the Trump administration. Biden’s action makes no sense. Arms sales to US allies should not be reversed by a later administration as that is a great way to drive away allies. Perhaps that is what Biden actually wants: to sabotage the Abraham Accords so Trump is not given the credit. If so, Biden is playing a very dangerous game. If anything, such action is more likely to alienate both the Israelis and all the Sunni Arab nations and drive them together even quicker than would normally have been the case. If the security interests of both the Israelis and Sunni Arab nations are betrayed by the Biden administration, both of them will realize that they must depend on each other more than ever with an unreliable US president in the White House. Both Israel and the Sunni Arab nations are existentially threatened by Iran and its nuclear program so they must look to each other as allies against Iran. If Israeli warplanes and missiles attack Iran in a preemptive strike against Iran’s nuclear facilities, I expect Sunni Arab nations will be joining the Israeli forces. The Obama-Biden administration was overtly pro-Iranian in its policies, and it looks like Biden is continuing this inexplicable pro-Iranian stance. As a result of Biden’s turncoat actions, I fully expect that Mideast intelligence-sharing operations with the USA by Israel and the Arab nations will grind to a minimum, if not a halt. Why should they share intelligence with the USA when the USA can no longer be trusted to withhold that information from Iran?

Consider also Israel’s warning that Biden’s pro-Iranian policies might cause “nuclear proliferation” in the Mideast. This could have several meanings. One is that Israel might openly announce it has nuclear weapons of varying yields which will be used to hit Iranian nuclear sites if Iran does not unilaterally end its nuclear program. This kind of an ultimatum might be given to Iran by Israel if Biden follows through with his pro-Iranian intentions. This would also end the Israeli policy of being coy about whether it has nuclear weapons. It also may be an indirect warning that Saudi Arabia, Egypt and the UAE will develop their own nuclear weapons to deter Iran if Biden lets Iran have a path to nuclear weapons. Israel and the Sunni nations may even negotiate and declare an open military alliance (a kind of Mideast NATO) to jointly defend their nations from Iranian attacks. I’m not openly predicting this, but I’ll say that such a development is far more likely if Biden follows through with his pro-Iranian intentions.

There is another reason why Iran may choose to attack Israel and the Sunni nations sooner rather than later. The fifth link reports about a little-known fact: that native Persians within Iran are not reproducing at a fast enough rate to be a threat to Israel and the Sunni nations in future years. Indeed, the population decline is alarming. The link opines this fact may move Iran to may make a decision to attack Israel (and likely the Sunnis) “within a few months.” If Biden starts implementing pro-Iranian policies as he has stated he will do, then that could easily give Iran a “green light” to attack its enemies because it thinks the USA will stand aside and let them do so. If the report is accurate that Iran might attack within a few months, then it is highly likely the Israelis will attack Iran in a preemptive strike before Iran does so.

Iran (“Persia”) is prophesied in Ezekiel 38-39 to be allied with Russia, China and their allies in a final Gog-Magog alliance that will attack the modern nations of (or allied to) the latter-day nations of the ten tribes of Israel. While that prophecy describes a huge global war that will erupt at the very end of our age when the Gog-Magog alliance attacks the West and its allies, that prophecy does not preclude a series of regional wars between some nations within these two respective military alliances prior to the final climactic world war. Indeed, the Mideast needs to be watched very closely given the information and statements in the cited links. For a complete examination of the final global war prophesied in Ezekiel 38-39 (and its uncannily accurate prophecies about the modern alignment of nations), please read my comprehensive article about this prophecy entitled What Ezekiel 38-39 Reveal about a Future World War III. For a detailed examination of the history of the ten tribes of Israel and their whereabouts in the modern world, you will find that information in the books offered at my website’s homepage.

[Additional Note: I’ve received inquiries from readers asking about the “Articles” tab at my website. A number of my article titles now have lines running through them, rendering them inactive links. This is a temporary situation. I have not withdrawn any of the articles or changed my views expressed in any of them! My long-time webmaster and site administrator died of Covid-19 suddenly, leaving me without his services. A technical glitch then occurred at my website which prevented access to some of my articles at the website, and it was far beyond my ability to remedy. I now have a new webmaster and he has assured me that he will correct the problem within a short period of time. In the meantime, some of the articles that are temporarily inaccessible at the Articles tab are still available at my website’s home page! Just scroll down on my home page and you will see a collection of many of my articles accessible there as well.]