Biblical Lessons About the Power of Music 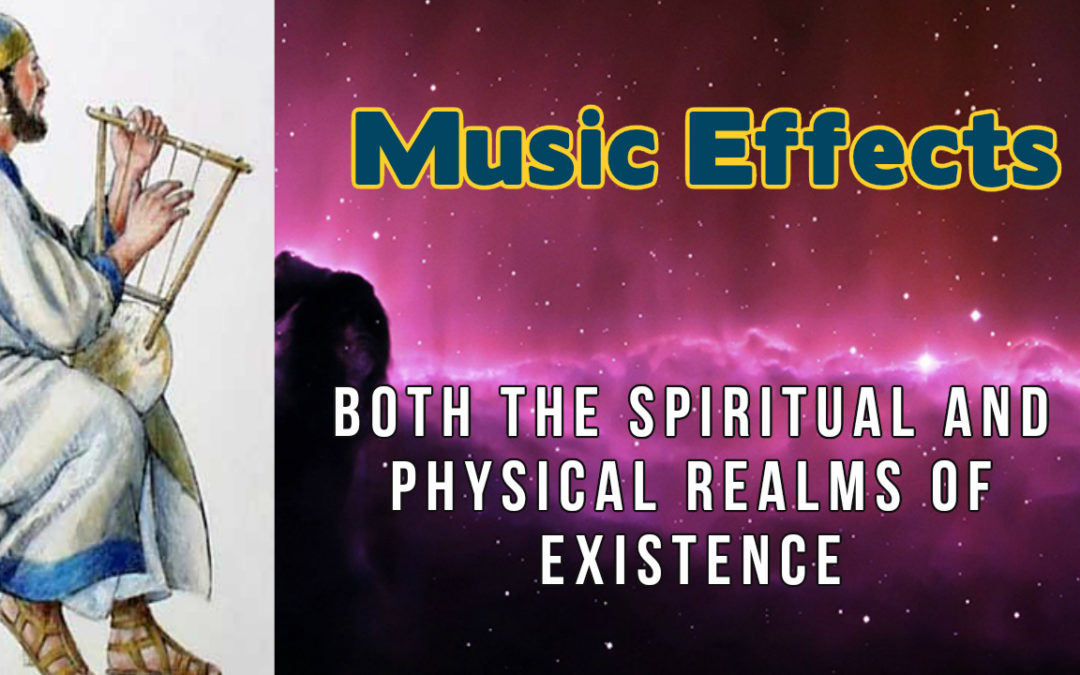 The item below was originally posted on my blog in December 13, 2009. However, so many new visitors to the website have likely never seen this post that I thought I would offer it to readers at this time as it contains biblical perspectives on the subject of music that are timeless and will never go out of date. Music is something we take for granted, but it has powerful uses and can move the spirits of people in many ways–some good and some bad. The Bible has much to say on this subject, and we should keep its examples in mind in our own use of music–a marvelous gift from God for mankind to use and appreciate.

This is a post I’ve wanted to do for some time, but there have been so many things happening in modern world events that I have had to delay writing this one. I think that many people do not appreciate that the Bible reveals that music can have a tremendous spiritual effect on people. While this post is not meant to be an exhaustive discussion of this subject, it will, hopefully, give you enough information to have a new perspective on the power of music.

Did you realize that the Bible confirms that music created in the human dimension has the power to influence what happens in the spirit world? Music can actually be a nexus where the spiritual and physical world interact. God made mankind in his very image and likeness (Genesis 1:26-27). Being made in the image of God (the Elohim) mankind was given the same capacity to create and enjoy music that God (the Elohim) possess. The Bible makes it clear that God enjoys great music in the heavenly realm. Revelation 5:8-11 records that the 24 Elders at the throne of God worship God with music on harps and John foresaw a “new song” being sung by the angels and/or the resurrected saints in the future. The book of Revelation also refers to seven “trumpet” plagues being sent on the earth at the end of this age. Trumpets are a musical instrument, and a “trump[et]” sounds at the return of Jesus Christ to the earth (I Thessalonians 4:16). Job 38:7 records that spirit beings “sang” at the creation of the earth when God made it in its original beauty (before the rebellion of Lucifer wrecked the original earth—see my article Is the Earth 6,000 Years Old?).

When God led the Israelites out of Egypt in the Exodus and set up his administration over the Israelites, he directed that orchestras of musicians and choirs of singers be appointed to serve at his Tabernacle/Temple services. When the Ark of the Covenant was moved during the reign of David, the appointed singers and musicians accompanied the procession with a wide variety of musical instruments (I Chronicles 15:25-28). When Solomon dedicated the Temple of God, there were many Levites who were the appointed singers in special white uniforms along with musicians who served as a Temple orchestra. To give us an insight into how huge this choir and orchestra were, there were 120 Levites just in the trumpet section (II Chronicles 5:12-14)! God responded to the music of the Levites and the dedication of the Temple with a divine sign of his presence and his pleasure in the ceremonies. David was “a man after God’s own heart” (Acts 13:22), and David delighted in serving and praising God with music. Some of the Psalms were specifically written by David to be sung as praise songs to God (Psalm 66-70 and 84-85 for example). David referenced a variety of musical instruments in the Psalms that were part of the worship services before God (Psalm 33:2, 81:2,-3, 144:9, etc.). The last Psalm (Psalm 150) refers to God being praised with trumpets, psalteries, harps, timbrels, stringed instruments, organs and two kinds of cymbals. Psalm 150:5 also indicates that David liked “loud” music as part of a worship service. Psalm 22:3 records that God “inhabits the praises” of his people. Sincere musical praise, therefore, draws God’s attention to the assembly where the music is being made, as II Chronicles 5:12-14 confirms.

Let’s now consider two more biblical examples where music made in the human realm actually affected the spirit world. The first is in I Samuel 16:14-23. In this account, King Saul was troubled by an evil spirit that was sent upon him by God for Saul’s disobedience. The young David was a skilled musician on a harp, and the beautiful music (and, presumably, the lyrics of praise to God which accompanied his music) actually caused this evil spirit to depart from Saul. This account reveals that beautiful, Godly music creates an environment that drives evil spirits away! The second account is a truly remarkable one found in II Kings 3. Elisha was one of the most powerful prophets in the Bible. He even had a “double portion” of the spiritual power of Elijah (II Kings 9-11). However, even as powerful a prophet as Elisha was stifled in his efforts to have God’s Spirit flow through him on one occasion. Elisha was so repulsed by the presence of Jehoram, an evil king of the northern ten-tribed kingdom of Israel, that the Spirit of God didn’t readily flow through Elisha, even though Elisha liked the good King Jehoshaphat of the kingdom of Judah (who was also present). King Jehoshaphat had asked for a prophet of God to give counsel about a pending war, and Elisha was brought into the assembly of kings. What was Elisha’s solution to his difficulty in having God’s Spirit flow through him? He called for music to be made! He asked for a minstrel (a musician) to be summoned, and when the minstrel played on his musical instrument, God’s Spirit “came upon” Elisha and he was able to have God’s counsel flow through him. Elisha apparently asked the minstrel to play a particular tune which Elisha knew from past experience would draw him closer to God in his mind and emotions. In this example, we see that particular pieces of music can even motivate prophets to be more effective in God’s service. If this is true for powerful prophets like Elisha, it must be true for all Believers as well.

Music can also have a negative spiritual influence over people as well. When Lucifer was originally created, Ezekiel 28:13-15 reveals that he was not only beautiful in appearance, but had a particular gift for music as “tabrets” and “pipes” are mentioned in connection with his creation. This account metaphorically refers to Lucifer as “the king of Tyre,” but no human king of Tyre was ever “perfect,” “in Eden” or served as an “anointed covering cherub.” When Lucifer fell into sin and rebellion, as Isaiah 14:12-19 records, Lucifer became Satan and used his talents to pervert and warp all that was good and beautiful in the creation. He has also used his musical talents to induce mankind to sin via music that promotes rebellion, lust, violence, etc. As this world “goes downhill” during the latter days in which we live, various forms of “music” have developed which promote sinful activities and attitudes. It is my opinion that many rap sounds and lyrics, acid-rock, and jangling heavy-metal sounds are degenerate forms of “music” that will disappear from the earth when Jesus Christ/Yahshua returns. But that’s just my opinion.

However, I don’t want to generalize any broader than the above statement regarding forms of music, and I resign from any role in the “music police” concerning what is “good” and “bad” music. Music is so varied and people’s tastes in secular and sacred music are so different that what one person finds very joyful and inspiring could turn another person off. Music is a very individual thing in terms of choice. Music also varies greatly in different cultures. Music sets the tone for so many kinds of events and activities. Music can set moods which are mournful (as at funerals or when one is in deep grief), romantic or patriotic. Martial music can motivate people to march off to war. II Chronicles 20 records an instance where the kingdom of Judah, ruled by Jehohoshaphat, was about to be invaded by armies from three other nations. God sent them a message that God would fight Judah’s battle for them, and the Jewish army was led by a throng of singers and musicians who praised God as they marched to meet the invaders. When the Jews began to sing (verse 22), God intervened and caused the three invading armies to fight each other and wipe each other out.  This was another instance where “praise music” unleashed God’s power in behalf of his people.

Again, this post was not intended to be an exhaustive narrative about the role and power of music, but I hope the above biblical examples have given you a greater appreciation of the power of music in the lives of both nations and individuals.