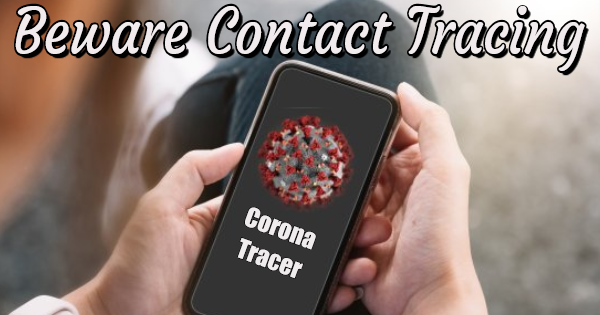 As the coronavirus spreads, the concept of “contact tracing” has entered the public consciousness. Since infected people can be asymptomatic for days and can be spreading the disease unknowingly, doctors and health care authorities will typically attempt to determine wherever such people have been whenever they do become symptomatic or test positive for the coronavirus (Covid-19). Many American states are hiring interviewers to do face-to-face interviews with each infected person to determine who they came in contact with during a set period of time. People identified as having contact with asymptomatic but infected people will then be sought out, interviewed, and tested themselves in an effort to limit the spread of the virus by quarantining those who test positive. That is all quite reasonable, but modern Big Tech companies have rolled out a new technology to “help” in this process. Their “help” has severe privacy-destroying, “Big Brother” implications.

Their Big Tech solution is to have everyone have an app put on their smart phones so everyone can be tracked, 24 hours a day, presumably for the rest of their lives, to determine everywhere they have been and determine who they have had close contact with throughout a “contact tracing” time of interest that may affect them. The first link explains how these phone apps, combined with Bluetooth and GPS technologies, can very effectively put everyone under constant electronic surveillance so the data being gathered can “help authorities find you” if you have potentially been infected. This kind of tracing technology has all kinds of data privacy concerns. Indeed, it essentially eliminates the very concept of “privacy” for anyone with a smart phone. The first link addresses the privacy concerns and suggests the data could be dumped monthly, but how would anyone know such data is ever being dumped? Would government agencies dump their data monthly? Even if they did, if the Big Tech companies retain the data secretly, then governments and Big Tech can cooperate endlessly to make sure governmental agencies always have access to all your personal tracking data. China, with its 24/7 surveillance of all its citizens and its imposition of “citizenship scoring” programs, will assuredly never dump any such data. The link describes how pervasive these tracking apps are already becoming. It lists Israel, India, South Korea, Taiwan, the 27-member EU nations, and others as already having implemented (or are implementing) data tracking systems. The second link reports that an Israeli court has forbidden the government there to use the tracking system that had been implemented as it was too invasive of people’s personal privacy. The link also reports Slovakia is using this data tracking app and that France wants to impose a tracking system for its citizens which is even more invasive than what Big Tech wants to do!

How effective are these data tracking systems? Apparently. they are quite accurate. The third link offers a detailed analysis of the results of 18,000,000 Americans who already voluntarily placed these tracking apps on their phones. The results show that after a period of observing stricter personal mobility rules, people tend to begin ignoring them and start going out more liberally into the public spaces. The analysis offers very specific results for people in New York City and in three counties in Texas. These people may not realize that they are now being tracked as accurately as “tagged” lab rats in a lab experiment. There are also major concerns about the objectivity of any program related to the coronavirus or any other type of political/human activity as Big Tech programs do censor out data that does not fit with their mostly-Leftist or establishment PC views. A case in point: the fourth link shows that Big Data platforms deleted a video clip by two California doctors who were concerned that the death totals for people dying of Covid-19 were being inflated by official policies and interpretations of the data. In a matter important to coronavirus-fighting measures, the fifth link relates that Sweden, a European nation that chose to avoid harsh lock-downs of its population, actually has experienced a lower death rate than France or the United Kingdom–which have had prolonged rather harsh lock-downs of their populations. This data indicates that the lock-downs are ineffective in fighting the coronavirus because they do not allow people to develop “herd immunity.” At some point, you must allow people out into the public marketplaces or you will inevitably have two results: (A) prolongation of the virus’ power over a population and (B) a collapse of national economies and a resultant economic Depression. At some point, it is critical that people be allowed to go to work and restart their economies and develop “herd immunity” in the process.

There are a variety of data tracking systems that can be applied to people by their governments. The sixth link shows that compliance is low among people if the system is only voluntary. North Dakota is cited as a state where only 3% of the people put “tracking” technology on their smart phones and Singapore where only 20% of the people did so. The link reports on one particularly aggressive surveillance system deployed in India. This system creates a “virtual perimeter” around a person’s dwelling and alerts authorities electronically if anyone ventures more than 175 feet from their dwelling. I think all readers can visualize how invasive and controlling this technology will be when any authoritarian government uses this system. It effectively creates an electronic fence to contain a human being much as an electric fence will contain a dog inside a property without any physical fence being needed. I wonder how long it will be until smart phones are equipped with a punishment program to shock people if they venture beyond 175 feet from their homes?

Wired magazine has an article exposing how controlling these tracking apps will become even after the coronavirus is over, and this article is enclosed as the seventh link. It warns that governments will not give up control over the tracking apps that have been imposed on people. It warns that “these apps will still be watching over us,” and that “on their current trajectory, they [the apps] will become essential parts of our daily lives (emphasis added).” Get ready folks. The world foreseen by George Orwell is almost upon us. This article also notes that while the Big Tech companies can develop less-invasive ways of storing the data and making it autonomously active only on users’ phones, governments are likely to be insatiable in their hunger for control over people’s lives. The article cites the United Kingdom and France as being especially invasive in the Western world in establishing these app-based monitoring controls over all their citizens. China effectively has already imposed electronic monitoring controls over all its citizens.

The above has abundant implications for fulfilling biblical prophecies. Revelation 13:11-18 is the famous end-time prophecy that a “beast” system will gain power over the entire earth and will impose rigid financial-controls over people’s lives (see verse 16-17). This rigid control over people will be implemented via something or some things which involve the use of the hand and/or the forehead. Keep in mind the Apostle John, when he was given this vision into the latter days, had to describe the very high-tech things he was seeing in the low-tech vocabulary and perceptions of his culture in the first century AD. We tend to interpret John’s descriptions in our own cultural contexts, but we need to realize John’s limitations. Was he even familiar with the concept of paper money? Would his vision of the latter days have failed to understand paper money changing hands as actually being a financial transaction? After all, in his times, “money” was gold and silver (and sometimes base metal) coins. John would have had no words to describe a smart phone’s operations, but his wording that the beast’s control system involved one’s hands or foreheads clearly could be his observations of bio metrics being used to activate or use smart phones to make financial purchases. However, If John saw someone using a smart phone to buy and sell stocks or transfer money between bank accounts, John would have had no idea what was going on. What would have been obvious to John is that there was something in everyone’s hand that would be ubiquitous at the very end of our age. Smart phones can be activated by a retinal scan via holding up a smart-phone to one’s forehead or they can be activated via finger-prints. There are even proposals to load data about everyone’s health status on their phones to show that they have received the required vaccinations or have the essential antibodies to the coronavirus to be permitted back into society. If everyone’s health status data was loaded on their phones, a phone could flash “green” if the person was eligible to be active in social places and flash “red” if one was not permitted to be with other people. In this way, smart phones could be used to control people by limiting their access to public spaces. There is another possibility. Given the global spread of Covid-19, we are now all familiar with the nearly-ubiquitous presence of thermometers being aimed at people’s foreheads before a person is admitted into a nation’s borders or a particular building. The Apostle John could have also been seeing the latter days in our time when digital thermometers or remote sensors were being used to control people’s access to public spaces via a quick examination of their “foreheads.”

John’s language that the beast power will control people via some mechanism involving their hands or their foreheads (Revelation 13:16) allows for the nations to use alternate means of monitoring and controlling their populations. Monitoring bio metrics will clearly be a part of this system but there may not be a single uniform monitoring system used everywhere in the world. Each nation may implement varying systems, but the key point to notice is that all humanity will be monitored and controlled via some kind of device or mechanism that involves their hands and/or foreheads. The technologies to do this already exist right now. The nations are implementing financial/health/personal monitoring techniques right now that involve the use of everyone’s hands or foreheads. John is not here to give us a more exact description of what he saw in the latter days. Our perception of what he saw is limited by the inability of his low-tech vocabulary to understand or describe what he was observing in our time. At best, we have a “Cliff’s Notes” version of what he saw in our latter-day period of time. If you have any doubt that we are living in the latter-day period of time described in the Bible’s latter-day prophecies, please read my article, Are We Living in the Biblical Latter Days?

It is possible that we are entering, or already have entered, the period of time John saw in his vision.