BAVARIA NOW REQUIRING CROSSES TO BE DISPLAYED IN ITS PUBLIC BUILDINGS 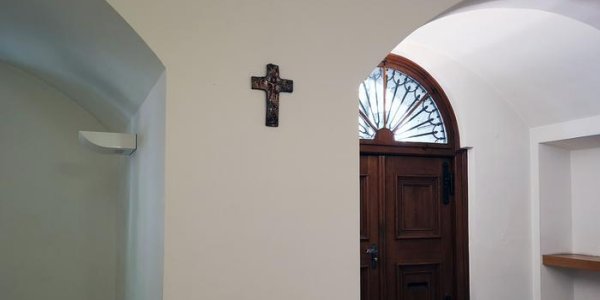 The German state of Bavaria has ordered its public state buildings to prominently display a Christian cross in Bavarian state public buildings (first link). The order does not apply to the governmental buildings of municipalities within Bavaria. This action is quite noteworthy, and deserving of commentary. I think that there is considerably more here than first meets the eye. Bavaria is heavily dominated by Catholics, but Bavaria’s State Premier, Marcus Soder, is a Protestant. Interestingly, some Catholic leaders have criticized the move. I think it was telling that Soder chose to be in the Vatican having a meeting with Pope Francis on the day the order went into effect.

The first link and second link from the German media give details of how this order is being implemented, who is in favor of it and who opposes it, etc. The third link and fourth link give perspectives on this action from other European media sources. It is really quite remarkable that a German governmental leader is implementing this pro-Christian cross ruling while a number of Christian leaders are opposing it. Many American Christians would be thrilled to have state governors in our nation impose such a law (if they could). These links include an examination of arguments by his detractors that Herr Soder’s action was being done for domestic political purposes. A Bavarian election is coming soon, and the incumbent CSU party (of which Herr Soder is a member) stands to lose seats to the upstart AfD party, which is running to the right of the CSU. His action could be an attempt to shore up his conservative base. Despite this fact, I think Herr Soder’s action is a genuine reflection of his personal viewpoints…for two reasons. If it was purely politics, would he be meeting with the Pope on the very day this rule went into effect, and would the Pope be meeting with him in so singular a faction on a contentious political issue? The second reason is that the CSU party is much more conservative than Angela Merkel’s CDU party with which the CSU normally is allied. Soder’s CSU party, Merkel’s CDU party and the leftist SPD party are currently aligned in a very tenuous governing coalition. The Conservative CSU and the Leftist SPD are poles apart in their political/social views, and Merkel is caught in the middle trying desperately to hold her coalition together to avoid new elections in which the Rightist AfD party is widely expected to gain greater support. If Merkel tilts too far to the Left, the CSU may bolt the coalition and Merkel’s government will fall. If she moves too far to the Right, the SPD can bolt and her government will fail.

Mr. Soder and his CSU party earlier sent a very strong message to Chancellor Merkel and all of Germany when it invited the anti-EU, anti-immigrant Hungarian Prime Minister Viktor Orban to be an honored guest at its party meeting (fifth link). This signaled that the sympathies of Herr Soder and the CSU party are more closely aligned with the anti-EU, anti-immigrant Orban (and the rest of the nationalist/populist parties in Europe) than with either of its governing coalition partners within Germany. Implementing a rule that Bavaria’s state buildings must display Christian crosses is very much in sympathy with Hungary, Poland and other Eastern European nations who have stated that they do not want to forsake their Christian heritages as have the western European nations. The fact that the CSU party leaders huddled with Prime Minister Orban recently is consistent with a common viewpoint that asserting Christianity and its symbols act not only to preserve traditional European civilization but also as a needed bulwark to guard against the Islamization of Europe. For this reason, I think Herr Soder’s action is motivated by a pro-Christian stance, not mere politics.

This action highlights the growing political/cultural divide within the EU. Hungary, Poland, the Czech Republic, Slovakia, and other Eastern European nations are vehemently opposed to the actions of the EU/German/French elites who are abandoning the Judeo-Christian roots of eastern civilization, abandoning Christianity in any form and who want to welcome millions of Muslims into Europe even though these Muslims have no intention of assimilating into the values or practices of western civilization. Italy has joined Eastern Europe in its stunning installation of a Euro-skeptic governing coalition which wants to begin expelling Islamic and West African immigrants who did not come into Italy by legal means. Its coalition has proposed expelling 500,000 immigrants from Italy (sixth link). The United Kingdom is, of course, still in its slow-motion departure from the EU after its Brexit vote. Many Greeks are seething due to the harsh austerity measures imposed on them by the EU. It seems clear that Bavaria is joining this nationalist coalition. Slovenia, a Balkan nation which is the home country of American First Lady, Melania Trump, just held an election and the populist, anti-immigrant party won the election. However, its Parliament has so many parties in it that forming a new government will be difficult (seventh link and eighth link). It is revealing that the Slovenian party won the election with what was essentially a “Slovenia First” campaign, which was modeled after the “Hungary First” winning election theme by Prime Minister Orban. Both of these successful European campaigns echoed the “America First” theme championed by US President Trump. What all these winning campaigns had in common was a strongly nationalistic stance. The Italian election’s winner had an “Italy First” theme even if they did not enunciate it that bluntly.

On the other side of the European divide are the EU leadership and its bureaucratic institutions, the European elites, German Chancellor Merkel, France’s President Macron and others. Spain’s government was solidly in the pro-EU camp, but it just fell due to domestic corruption issues. The Socialists who will now govern Spain are expected to be pro-EU, but that is not yet clear. Sweden’s government was very pro-EU and pro-immigration, but those positions have resulted in a severe internal crisis due to crime brought into the nation by far more immigrants than Sweden could accommodate, as my fairly recent post documented.

This divide across Europe is growing steadily wider and these divisions are accelerating. Amos 3:3 states a profound truth: “Can two walk together except they be agreed?” Anyone with a long-term view of history can observe the growing fault lines inside Europe and conclude that the EU cannot stay together given these mounting internal stresses and that the Eurozone is also at risk. How Europe divides and realigns itself may have very important ramifications for the fulfillment of “latter day” biblical prophecies. Many Christians in many religious denominations have expectations that the Vatican and Europe will play crucial roles in the fulfillment of various latter-day prophecies. I share those expectations, but I feel it is still uncertain how these prophecies will involve Europe as well as the rest of the Western world. When there were various manifestations of the Holy Roman Empire under various medieval rulers, the European powers were contained largely within Europe. In later centuries, these European powers created empires and the nations of Canada, the USA, Australia and New Zealand all began as colonial extensions of the old British Empire. Therefore, I urge Christians to think more broadly in their prophetic expectations than just inside Europe, per se. Based on the evidence contained in my books that many European nations (as well as nations founded by them) are the modern descendants of the so-called “lost” ten tribes of Israel, who were exiled into Asia in the 8th century BC and then migrated in the 3rd through 6th centuries BC into Europe from Asia after the fall of their Parthian and Scythian empires, I also watch world and European events through the prism of God’s promises and prophecies regarding the ten tribes of Israel. As an aside, I will simply state without elaboration that I believe many of the European nations who are not descended from the ten tribes of Israel are descended from the patriarch, Abraham, via Keturah, his final wife with whom he had many sons (Genesis 25:1-6).

This blog will continue to watch European and world events very closely and bring to readers’ attention those developments from a biblical perspective. The pace of important events is accelerating, and we are clearly entering more deeply into the final years of the latter days of our current age. For more information on above topics, I urge readers to review my articles, Are We Living in the Biblical Latter Days? and The USA in Bible Prophecy. I urge those who have not yet read my printed books or my E-book on the ten tribes of Israel to do so. You will understand modern geopolitics and events far better if you watch them through the biblical perspective which is controlling all national destinies.