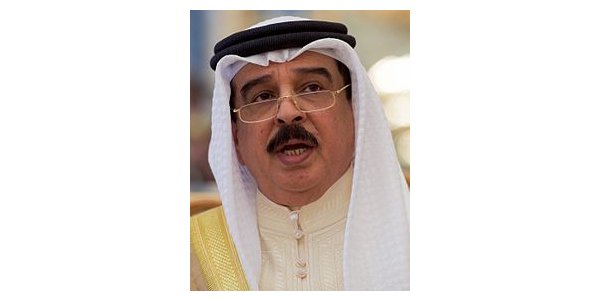 Long-time readers of my blog realize that I’ve been closely following the gradual development of an Israeli-Sunni Arab alliance in recent years, hastened greatly by a growing and shared threat from Shiite Iran. This budding alliance is getting steadily closer to becoming an openly declared alliance, as these links confirm.

The first link and second link report that King al-Khalifa of Bahrain, a Sunni Arab nation on the Persian Gulf, recently met with Jewish rabbis and indicated that the Arab League ought to declare Hezbollah (an ally of Iran) a terrorist organization, a step already taken by the Gulf Cooperation Council. The information in the links indicates that an open alliance between Sunni nations and the Israelis is drawing near, and that open diplomatic relations between Israel and more Sunni nations is also drawing closer. That the Arab King of Bahrain has no problem meeting openly with Jewish rabbis reveals just how much the Mideast has changed in recent years from the long-time hostility that existed between Arabs and Israelis for decades.

The third link reports that in Egyptian President al-Sisi’s address to the UN, he declared peace between the Israelis and Palestinians is possible “if the Palestinian Arabs are willing to overcome their differences with Israelis and with each other.” This is an important statement as he put the onus on the Palestinians to make peace with Israelis, not the other way around. He also tacitly acknowledged the reality of what for Israel is a major problem in any negotiation: there is no Palestinian entity or leader that can bind all the Palestinians to any agreement. Hamas, a terrorist entity that wants no peace with Israel, governs Gaza while Fatah, a more “moderate” Palestinian group that still feeds anti-Israeli propaganda to its people, governs what is called the Palestinian portion of the West Bank. Egypt’s President al-Sisi, in my opinion, gave the Palestinians a strong public hint that they need to get their house in order and make peace with Israel, and he added that it is “extremely important” that they do so. President al-Sisi also had a meeting with Israeli Prime Minister Netanyahu to discuss the many issues now being faced in the Mideast. No doubt, the post-ISIS map of the Mideast and the growing Iranian threat and its dominance over Iraq, Syria and Hezbollah were central matters of discussion in that meeting.

These developments are entirely consistent with Ezekiel 38’s prophecy about the alignment of many peoples and nations in two rival alliances in the latter days of our current age. Ezekiel 38:2-6 lists the nations which will be members of the Gog-Magog alliance and Iran (“Persia”) is listed prominently as a member of that alliance along with Russia (“the land of Magog…Meshech and Tubal”) and China (“Gomer and all his bands”). Iran is a Shiite Muslim nation and it is a great rival to the Sunni Muslim nations. It is not realistic to see these two rival Islamic groups as being in the same alliance in our time, so it is logical that the Sunni Arab nations and other Sunni nations will be in the other global alliance headed by the ten tribes of “Israel” (the USA, UK, NATO and their global allies). Indeed, the Ishmaelites (the Arabs) and Egypt–both in the Sunni camp, are not mentioned as being in the Gog-Magog alliance. Both the Israelis and the Sunni Arab nations are already allies of the USA and other western nations.

When/if the Israelis and many Sunni nations openly declare a formal alliance with each other, it may become the Mideastern equivalent to NATO in Europe. This will radically alter the world’s perceptions of geopolitical realities in the Mideast. Because the USA is an ally to both the Israelis and the Sunni Mideast nations, it is possible the USA will also be a formal member of this Mideast alliance. That the king of Bahrain is meeting with Jewish rabbis and the President of Egypt is very publicly telling the Palestinians to “get their house in order” argue that the formal declaration of such an alliance may not be far away. Indeed, it may already be in existence behind the scenes.

For more information on the above topics, please read my articles, The USA in Bible Prophecy, Are We Living in the Biblical Latter Days? and What Ezekiel 38-39 Reveal about a Future World War III.