Austria’s Election Moves Nation a Big Step to the Right 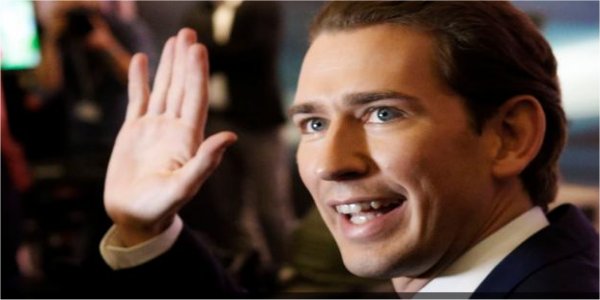 The nation of Austria has just held a very important national parliamentary election. The results have not yet been finalized, but the initial results indicate that a rightist, anti-immigrant party won the election. An even more rightist party was vying for second place with a center-left party, but it looks like the even more rightist party will emerge a very close third place finisher with almost as many seats in the Austrian parliament as the runner-up, center-left party. The formerly important bloc of leftist greens will be gone from the parliament altogether as it appears they were crushed in the election and didn’t meet the threshold to have representation in the parliament. For different perspectives on this election, see the three links below (from media sources in three different nations).

While the ultimate formation of the new government will be decided in negotiations between the parties, the most likely outcome is that the two rightist parties will form a coalition to govern the nation and Austria will be taking a major step to the political right after the new government is formed. The new Austrian leader will be only 31 years old.

The new rightist government in Austria will almost surely be very opposed to Islamic immigration, and since the EU leaders have been pro-immigrant, this will set Austria against the EU leadership on immigration matters. Previously, the United Kingdom had voted to leave the EU and the Visegrad Four (Poland, Hungary, the Czech Republic and Slovakia) were vehemently opposing the acceptance of the numbers of immigrants the unelected EU bosses “decided” they should take. They now can expect to have Austria as an ally in their position vis-à-vis unwanted immigrants. The Austrian election was a huge loss for the EU and the European elites that control the EU. The EU’s real power is invested in unelected officials and they are only really answerable to the elites. It is clear that there is a strong and growing movement among the European citizenry to oppose the leaders that the elites that have put in place to govern Europe.

The decisive victory of anti-immigrant parties in Austria can only give aid and comfort to similar populist parties throughout Europe and weaken the morale of the pro-EU parties. It is too early to make predictions, but the growing number and power of nations rejecting the diktats of the EU’s bosses in Brussels indicates that a number of European nations in the EU may also be leaving the EU in the future if the EU’s leaders do not dramatically become more people-friendly in their policies.

From a biblical point of view, this development further gives impetus to one possible way in which the current globalist power structure (called Babylon the Great in the biblical book of Revelation) will ultimately experience its downfall. If a number of nations leave the EU, the creditworthiness of the Euro will be weakened and it may even lose its credibility entirely. Since the Euro is the basis for so many trade deals, currency transactions, derivatives and plays a vital role in the IMF’s basket of currencies that make up its Special Drawing Rights, a crisis in the Euro could very quickly lead to a global financial crisis. We do not yet know what the ultimate trigger will be that collapses the current global political/monetary/financial system, but such a collapse is coming. The book of Revelation reveals (in chapters 17-18) that this collapse will unfold very quickly and Revelation 13:1-4 indicates the current system will be replaced by a new global “beast” system that will be allowed only 42 months to exist before it too is overthrown by the return of Jesus Christ at the head of an army of spirit beings (Revelation 19:11-20:4). We need to watch these developments very closely. If more European nations choose populist/rightist governments, the days of the EU, as we know it, may be numbered.

For more detailed information on the connection of the above biblical prophecies to modern events, please read my free articles, Is Babylon the Great about to Fall…Ushering in a New Beast System?, Are We Living in the Biblical Latter Days? and The Babylonian Origin of the Modern Banking System. For those who doubt there is a Creator God, I urge you to read my additional article, Is the Earth 6000 Years Old? [Hint: The Bible makes no such assertion and indicates the earth itself is far, far older than that–meaning there is no conflict between the Bible and modern science on the age of the earth.]