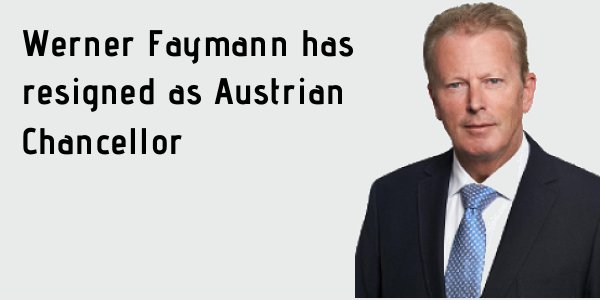 A couple weeks ago, I posted an item about the massive rejection of the Austrian ruling coalition by an outsiders’ political party that rose in prominence due to the problems brought to Europe by Islamic immigration. The situation in Austria, and the rest of Europe, continues to deteriorate.

The first link reports that the Chancellor of Austria resigned in the aftermath of the Austrian voters rejecting his coalition in the first round of the presidential election (the Chancellor has the most power in Austria’s governmental system). I also posted recently that Austria and Switzerland had closed their borders with Italy to only small numbers of Islamic immigrants. Hungary and other Balkan nations have also “gone their own way” with armed patrols on their borders, and the installation of razor-wire and other kinds of fencing on their borders to stop immigrants from entering their nations. The reaction against Islamic immigrants is spreading rapidly throughout Europe.

The second link reports on a terrorist/criminal attack by an Islamic person at a train station in Germany which killed one and wounded three. This is just one more in a growing list of criminal actions by Islamic immigrants against European citizens. Germans are reacting strongly to this and other dangerous incidents. The third link reports that German citizens are rushing in large numbers to buy self-defense weaponry to protect themselves against Islamic attacks. Germany has strict rules about gun ownership, so most of the weaponry obtained is non-lethal in nature, but some Germans are able to obtain firearms. It also mentions other nations where citizens are arming themselves for self-protection.

Obviously, this strong reaction against the criminal activity by Islamic immigrants will translate into political actions and vote swings in pending elections. The fourth link notes that a new German anti-immigrant party (which did surprisingly well in recent regional elections) has adopted a party platform which openly opposes further Islamic immigration into Germany. I would bet it is also a “law and order” party as well in its approach toward punishing and preventing criminal behavior against German citizens. Germany’s Chancellor Merkel may be serving her last term in office, as she has been one of the main advocates of allowing Islamic immigrants into Europe. Given the internal traumas her policy has caused inside Germany and the rest of Europe, she is becoming less likely to be re-elected. If the situation gets bad enough, she may eventually lose a “no confidence vote” in her own German Parliament.

It wasn’t that long ago when the media was reporting about a possible Greek exit from the EU over economic issues (a “Grexit”). The United Kingdom is holding a referendum next month to decide whether the UK should stay or leave the EU in a “Brexit,” and the latest poll shows a statistical tie with the “leave” side leading by one percentage point (fifth link). The sixth link reveals a Europe-wide poll confirms that the desire on the part of Europe’s voters to have their own nations hold national votes about leaving the EU is rising in many EU nations. The final link adds that one of the candidates for the presidency of France has announced he will hold a French referendum to leave the EU if he is elected–so a “Frexit” from Europe is now possible as well.

It is truly amazing how the “insider” political and social elites throughout the western world have become so disconnected from popular public opinion. Maybe it is because they tend to be rich and likely live in gated communities protected by security police. They do not have to worry about economic and financial collapse, the loss of good jobs and the resultant shrinkage of the Middle Class, loose borders and crimes committed by illegal or Islamic immigrants, etc. In Europe, nation after nation is turning to nationalist candidates to replace the globalists who have traditionally controlled national governments. In the USA, business tycoon Donald Trump has shocked the political elites by crushing his many Republican “insider” opponents to become the presumptive Republican candidate for the presidency of the United States. The insiders truly do not “get it” how deep and pervasive is the voter revolt that is brewing throughout the western world.

I have cited a prophecy in Deuteronomy 28:43 in previous posts that is increasingly coming true in the modern western world. As those who have read my books already know, the USA, the UK and many European and western nations are the modern descendants of the ancient ten tribes of Israel. As such, they are “covenant” nations in God’s eyes as he has blessed them with their modern blessings and prosperity due to his faithfulness to his covenant promises to their forefather, Abraham. Deuteronomy 28 and Leviticus 26 list sets of blessings and curses which shall befall Covenant nations depending on whether they obey or disobey God. Unquestionably, the modern western nations are increasingly not only disobeying God, but are openly mocking him in their national policies, lifestyles and cultures–therefore, they should expect to receive God’s curses. While these two chapters are technically part of the Old Covenant made between God and the ancient Israelites, the modern Israelite nations are still “covenant” nations through the Abrahamic Covenant which was not part of the Old Covenant God made via Moses with ancient Israel. Hosea 1:10 confirms that even when God was exiling the ten tribes of Israel from their old Promised Land for their sins under the Mosaic Covenant, he affirmed that the Abrahamic Covenant would remain binding on the ten tribes of Israel in future generations after their exile took place. In that verse, God affirmed that the populations of the ten tribes of Israel would increase massively after they left the Promised Land, and that was a promise which was part of the Abrahamic Covenant (Genesis 22:15-18).

One of the curses which will overtake Israelite nations if they persist in disobeying God’s laws will be that the “stranger [immigrants–illegal and otherwise] that is within you shall get above you very high; and you shall come down very low.” That is graphically coming to pass in today’s western world as the USA now has an estimated 9-11 million illegal immigrants in it and Europe is being “invaded” by Islamic immigrants who refuse to assimilate and want to impose Sharia law (and criminal lawlessness) on European citizens. A prophecy in Leviticus 26:19 is applicable to both the USA and NATO, but especially to the USA. It prophesies that nations will lose the “pride of their power” if disobedience to God’s laws becomes rampant in a nation. NATO nations have lost much of their past military power and the USA, under President Obama, has lost much of its previous military power as the military service branches have been overused and downsized by Obama. Iran, China and Russia routinely insult and provoke the USA militarily, and Obama does…nothing.

In articles and many posts, I have warned about the collapse of the Babylon the Great system, a globalist world system at the end of this current age. While the prophecy of Revelation 17-18 mostly focuses on the financial/monetary aspects of the prophesied collapse of Babylon the Great’s global financial/monetary collapse, this system also has a political side as well. Revelation 18:3 identifies the “kings of the earth” (the politicians and national officials) as being in bed with the “merchants of the earth” (the global multinational corporations) to oppress the world’s people while they aggrandize themselves. As globalist, insider political governments and politicians in Europe and the USA are being increasingly rejected by the voters, we are beginning to witness the fall of Babylon the Great’s political side as well. When Babylon the Great collapses, it will drag both its political and economic/financial segments down together. The signs of this pending collapse are now becoming more evident. For an in-depth examination of the biblical prophecies about the collapse of the modern global system of Babylon the Great, please read my articles: Is Babylon the Great about to Fall…Ushering in a New Beast System? and The Babylonian Origin of the Modern Banking System. I think you will find both articles eye opening and quite relevant to modern current events.