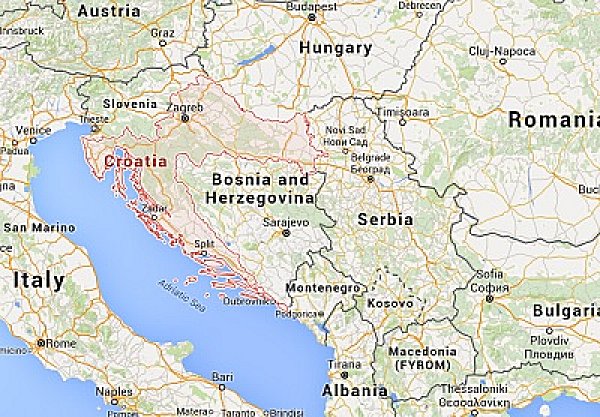 You may have noticed in media reports that there is a wave of Islamic immigrants heading toward Europe via boats from Libya to Italy. There is a reason for that and Central European nations are taking urgent steps to make sure the route into Europe from Italy is closed before it lets more Islamic immigrants into their region.

As readers know, the preferred route for Islamic immigrants into Europe has been via Greece via the Balkans into Germany and Scandinavia. At first, this was seen as a humanitarian matter, but as the immigrants came to be composed more of single, military-age males and crime spiked in the European nations into which they moved, Europe’s welcome mat for them quickly got rolled up. The first link reminds us that Macedonia, Hungary and other Balkan nations have taken emergency steps to stop the flow of immigrants through their nations. The Islamic immigrants who fled into Greece from Turkey via small boats have created a bottleneck in Greece as these immigrants find that nations to the north of Greece will not take them or allow them transit privileges. Germany, which set out a welcome mat at first, has had an internal backlash as crime has mounted and Chancellor Merkel’s party suffered election reverses in several regional elections due to the immigrant “invasion.”

The Islamic immigrants have adapted. They have begun crossing the Mediterranean Sea again in boats to head for Italian territory to head further north into Europe. The nations to the north of Italy are Austria and Switzerland. Both nations are taking swift measures to make sure that the immigrants allowed into Italy stay in Italy. Austria has closed its borders to almost all immigrants seeking to enter Europe via Italian border crossings and Switzerland has deployed soldiers from tank units to make sure that the immigrant tidal wave does not cross into Switzerland (second link and third link).

The “invasion” of Islamic immigrants into Europe has all but ended the “Schengen” agreement re: free passage between European nations. That agreement was intended for the citizens of EU member nations–not for an uncontrolled mass of Islamic immigrants coming from the Mideast, North Africa and Central Asia. Nations are being forced to abandon the Schengen agreement in order to protect their citizens and their own national cultures. The waves of more Islamic immigrants coming into Italy via small boats coming from Libya is going to cause further problems. There have already been the inevitable reports of deaths as some of these overcrowded boats capsize and their occupants are drowned. However, until word reaches Islamic homelands that they will not be allowed to pass northward via Italy into Europe via Austria or Switzerland, more Islamic immigrants can be expected to set sail on whatever craft they can find to try to reach Italy. Italy may become the new Greece as bottlenecks of immigrants pile up in Italian locations–unable to travel any further northward. Unless Italy (and the Vatican) want to be overwhelmed with Islamic immigrants pouring into Italy, Italy will have to find a way to stop them from coming into Italy. If that happens, expect immigrants to start attempting to head into France and Spain via Morocco, Algeria and Tunisia.

It would seem the best short-term way to stop this wave of immigrants is for Italian and NATO warships to patrol off the coast of Libya and intercept all immigrant vessels and return their occupants to Libyan ports. That would stop the migrant flow into Italy if people realized they would be intercepted and returned to their ports of departure in Libya. There is also the problem of what to do about the Islamic immigrants that have massed in Greece. An EU-Turkish agreement was reached, but (as I discussed in a recent post) that agreement could break down quickly if it results in Turkey issuing passports to immigrants (returned from Greece to Turkey) who then try to travel into northern Europe via trains and airplanes as well as via roads. It is not yet clear whether that agreement will solve anything.

Two things seem clear; (A) the desire of Islamic immigrants to reach European destinations will not diminish, and (B) the resistance to their arrival will grow as more of them arrive. The rise of right wing, nationalist political parties in European nations is already a strong indication of this last fact. Indeed, the pending “Brexit” vote (about whether the United Kingdom will leave the EU) may be decided by the growing European immigrant crisis.

As readers of my books and articles and listeners to my audio messages already know, it is abundantly clear from both secular and biblical evidence that many European nations are descended from the so-called “lost ten tribes of Israel” who went into exile from the old Promised Land in the first millennium BC. While the Jews (the tribe of Judah) always wanted to return to the Promised Land, the migrating ten tribes did not have any great desire to return to their old homelands. They formed new kingdoms and empires in Asia (Parthia and Scythia) which lasted for many centuries. When those empires fell, their masses of populations poured into Europe out of Asia and were called the Goths, Anglo-Saxons, Germans, Jutes, Franks, etc. They were also generically called “Caucasians” because many of them migrated via the Caucasus Mountains from Parthia (which had ruled over the Persians for centuries). Some of their descendants, who founded new nations in Europe after crushing the Roman Empire, eventually sent settlers to build new nations in North America, Australia and New Zealand. Whether they knew it or not (and overwhelmingly they did not), they were still governed by some of the terms of God’s Covenant that he made with their biblical ancestors. Generally, if nations remember God and obey his laws, they are blessed. If they forget God and disobey his laws, they will experience progressively worse problems. One of these problems is that “strangers” (immigrants) will enter their lands and exalt themselves higher than the actual citizens of their lands (Deuteronomy 28:43). That is happening as the Islamic immigrants generally have no interest in assimilating into the historic Judeo-Christian culture of Europe. They want the Europeans to surrender to the Islamic/Sharia laws that they are bringing to Europe with them. There is a “clash of civilizations” that is growing worse as more Islamic immigrants pour into Europe. More Europeans are discovering their past culture is worth defending and they are pushing back. Unless something is done to stop the tidal wave of Muslims pouring into Europe, this problem is going to get worse, and the ramifications will be many. None of them will be good.

In Luke 21, Jesus Christ prophesied about a series of signs and trends that would signal that the latter days of our age will have arrived. One of these signs of the latter days of our age would be the “distress of nations, with perplexity…(verse 25).” Whether it is the intractable wars in Syria and Iraq, the rise of Chinese militarism, Russian and Iranian military resurgence, the steady retreat and weakening of the USA which has rapidly accelerated under President Obama, the rising financial/monetary/debt crisis that is getting harder to control, etc., the world is facing a time of “perplexity” as nations face problems that defy solutions. These problems are going to get a lot worse before they get better. If you would like an in-depth examination of the fulfilled biblical prophecies that confirm we are living in the latter days of our age that will precede World War III and the Second Coming of Jesus Christ, please read my free articles, Are We Living in the Biblical Latter Days?, What Ezekiel 38-39 Reveal about a Future World War III, Is Babylon the Great about to Collapse…Ushering in a Global Beast System? and The Babylonian Origin of the Modern Banking System. If you read these articles and apply them to modern geopolitics, you will understand what is happening in our world far more than will the “perplexed” governmental leaders who have forgotten God.