Australia to Increase Its Military Due to Fears of China 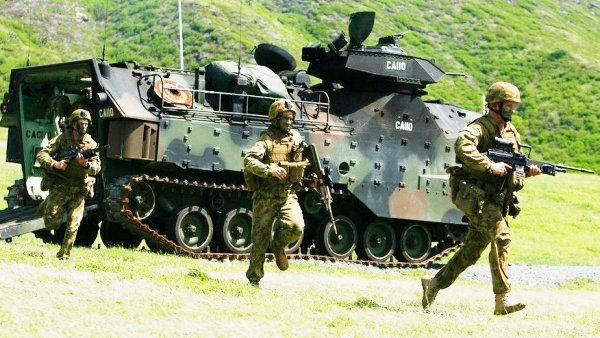 Australia, in response to China’s military buildup and militarization of the South China Sea region, has announced that it will begin a very substantial increase in its military forces over the next decade. The plan includes the addition of 33 new naval vessels and 91 new air force planes (this total includes 72 new F-35 fighters). Australia has obviously “seen the light” regarding the growing military threat from China and that Australia will need larger military forces to protect itself from China. The first link and second link detail Australia’s military expansion plans. This is a sizable investment for a nation with the population that Australia has.

Previous posts have noted that India, Japan and other Pacific Rim nations are building up their military forces in response to China’s increased militarism and bellicosity. Australia’s decision to beef up its military forces is a welcome development. Meanwhile, here in the USA, we have witnessed President Obama’s continued refusal to face reality regarding China’s military build-up. Obama is still in the process of downsizing the US military forces. Indeed, it may be that Obama’s inability to recognize the growing military threat from China is what is forcing other nations to beef up their military forces. They may realize that the USA may not be able to protect them as they once assumed and they need to do more to protect themselves. [I wonder when European nations will have a similar realization.] China is not pleased at the Australian military buildup (third link). That is predictable. They do not want the nations intended to be their future prey to start preparing to seriously defend themselves.

Biblically, this military build-up has significance. Ezekiel 38-39 warns that at the very end of our age, Russia, China, Iran and their allies will launch a surprise attack on the modern nations of the “house of Israel” (Ezekiel 39:12, 22-23, 25, 29) which is a biblical term for the ten tribes of Israel–not the Jewish nation in the Mideast (which is the “house of Judah” in biblical terminology). My books identify the tribes of Israel in the modern world and also document their migrations between the time of their exile from the Holy Land in the 8th century BC until the present. It is a most fascinating (and largely untold) story! My books, articles and audio messages all identify the modern Israelite tribe of Ephraim as the nations of Great Britain, Canada, Australia and New Zealand. Ephraim was prophesied in Genesis 49:14-20 to become, along with its brother tribe of Manasseh, great nations on the earth. Manasseh was prophesied to become a single great nation sharing a “brother” culture with the nations of Ephraim. That single great nation is the United States of America, which shares the Anglo-Saxon heritage of the Ephraimite nations, as prophesied. I urge new visitors to read my free article, The USA in Biblical Prophecy. Most of the other modern tribes of Israel can be found in Europe and Scandinavia, as my books document from both secular history and biblical prophecy.

Ezekiel 38:15 prophesies that the nations of the modern house of Israel will be attacked from the north when the Gog-Magog alliance attacks them at the end of our age. This prophecy fits the modern world’s geography quite well. During the Cold War, it was anticipated by American war planners that North America would be attacked from Russia from out of the north. That will literally happen at the end of our age. Australia and New Zealand would logically be attacked from the north by China. European nations would be attacked from the east and also from the north. Much Russian military might is based in the Kola Peninsula, from which Scandinavia and Great Britain would be attacked via sea and air as well as overland for the Scandinavian nations. Mainland Europe would also be attacked “from the north.” Many people do not realize that Russian home soil is located on the northern part of the European continent in Kaliningrad. Russia is pouring weaponry into that Russian European enclave (last link), and in a future attack, could launch a surprise attack with salvos of cruise missiles being fired from Kaliningrad at NATO targets all over Europe in the prophesied Ezekiel 38-39 war. For many details about how World War III will be fought and how it will be decided, please read my article, What Ezekiel 38-38 Reveal about a Future World War III.