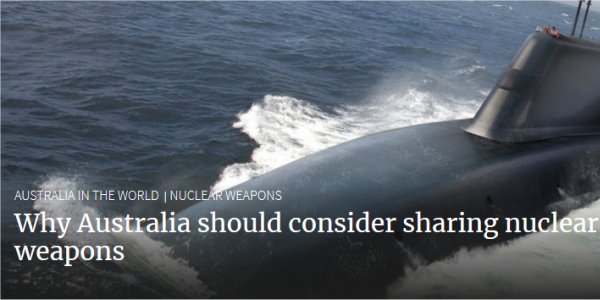 As the rogue state of North Korea races to bring its nuclear weapons program to fruition, many nations in the world have now come under nuclear threat from North Korea–given the range of its latest ICBM. One of those nations threatened by North Korean nukes is Australia. Will Australia now develop its own nuclear weapons in order to defend itself against not only North Korea’s nuclear weapons, but also against China’s increased militarism and China’s already developed nuclear program?

Given the obvious current nuclear threats from China and North Korea, Australia is now again debating the issue of whether it should become a nuclear-armed nation (second link and third link). The second link opines that the best and most economical way for Australia to become a nuclear power is to share with the United Kingdom the cost of the UK’s new nuclear-missile-firing submarine program. Each of those new nuclear subs would have eight nuclear warheads on each missile, so each new submarine would pack an enormous nuclear punch. However, the UK is reportedly having trouble finding the funding for this program. If Australia made this new nuclear-missile equipped submarine program a joint British-Australian program with shared funding, Australia could become a nuclear power with easily-deliverable nuclear weapons within a few years as the new submarines were constructed. That proposal has much logic. Not only would this eliminate the need for Australia to fund its own land-based ICBMs, but also having a significant nuclear deterrent on a quiet new submarine would make it possible for Australia to continually relocate its nuclear force to sail within firing range of whatever threat may emerge. Not everyone supports an Australian nuclear deterrent, but there is one overriding factor in support of obtaining nuclear weapons. Those nations that do possess nuclear weapons will have real “hard power” that no non-nuclear nation will have. Having “hard power” in the form of nuclear weapons inevitably makes a nation’s “soft power” diplomatic efforts more credible and effective. The links also disclose that some forward-deployed American nuclear weapons already have a shared-control system with several NATO nations (Germany, Belgium, Holland, Italy and Turkey).

From a biblical perspective, the Apostle Paul prophesied in II Timothy 3:1 that “perilous times” would characterize the latter days of our age. Jesus Christ himself prophesied that “wars and rumors of wars” would characterize the latter days just before his Second Coming (Matthew 24:6)  Matthew 24:22, in the same prophecy, clearly anticipated the modern nuclear-armed world when it prophesied that “all flesh” would be at risk of perishing in the latter days. A literal application of that prophecy was not possible until the dawn of the nuclear age. For more evidence on how accurately biblical prophecy applies to our time, please read my article, Are We Living in the Biblical Latter Days? If you are a doubter that the Bible should be taken seriously from a scientific point-of-view, please read my article, Is the Earth 6000 Years Old? [I’ll offer a hint: my article does not assert the earth or the physical Universe is so young, but it does offer insights into what the Bible reveals really happened on this planet long before mankind was created, why the dinosaur age came to a sudden end, etc.]. I think many will find these articles to be very eye-opening.