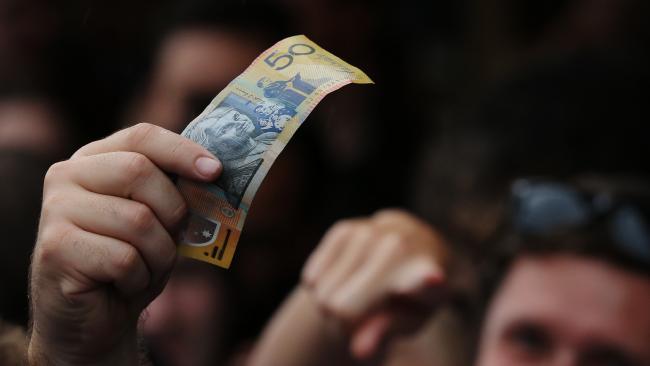 Recently, I have written two posts about the new efforts to have human beings “chipped” in their hands for purposes of convenience and security. The new technology to chip people in their hands was examined in light of the prophecy in Revelation 13:16-17 that the final global governmental/financial system of the “beast” will include some kind of a “mark” in people’s right hands or elsewhere on their bodies. I have now been made aware of a new development that may put a new spin on how Revelation 13:16-17 could be fulfilled.

The nation of Australia is considering a high-level proposal to “chip” that nation’s 100- and 50-Australian dollar currency notes. The proposal is being made, ostensibly, to combat the black market and discourage the hoarding of cash. This proposal is described in the first link and second link. The links report that senior citizens are hoarding the high-value currency notes (blame the elderly!) and that foreigners (especially Chinese tourists) are taking the high value currency notes out of the nation of Australia. One link asserts that while senior citizens and non-Australians favor holding the 100 dollar currency notes, it is criminals who mostly use the $50 note bills. [I do wonder how they came to that conclusion.] One link reports that there are 300 million 100-dollar notes in circulation, which would represent a total of $30 billion in currency value just in the 100 dollar notes. When one adds to that number the total value of the 50 dollar notes in circulation, the amount of cash being discussed is almost all of the total value of Australian dollars in currency (the low value currency notes having very little relative aggregate value compared to that of the 100- and 50-dollar notes. The third link reports the Australian changes being considered would affect more than just the replacement of high currency notes with “chipped” currency notes that could be, tracked and monitored.

It was not long ago that India recalled its high-value cash notes in circulation, and it almost caused a national panic. It was reported that India’s black market was very large and the government was seeking to gain control of the entire national economy in such an action. However, I do not recall India ever proposing to do what Australia is now considering. Australia is proposing to not eliminate all 100- and 50-note currency notes, but rather to “chip” all such currency notes in circulation. This would, almost surely, require recalling all the large denomination notes now in circulation and replacing them with “chipped” currency notes. Everyone with Australian money would, presumably, have to exchange their currency notes for chipped notes by a specific date if this proposal is adopted. It is my assumption that Australian law enforcement agents would be stationed at every currency exchange location to detain for questioning anyone who presented for exchange over a certain allowable level of the old currency notes. Perhaps then we will discover if “granny” is really responsible for hoarding all the larger denomination notes. The new higher-value notes would likely all have nano-RFID transmitters on them so the government could locate any person or entity which is accumulating more than a specified number of such bills deemed to be acceptable.

This certainly looks like one more step in a series of such steps by globalist governments who are seeking to transition their economies and populations to a new cashless society. However, as my previous post noted, there is much global public opposition to such actions–particularly in the USA, the world’s largest economy. The Australian proposal may be a new means of implementing currency and population controls on people without having to embed a physical chip in everyone. The Australian proposal would require the currency notes to be chipped instead of the citizens. This might be more palatable politically, and begs the question of what the Apostle John actually saw in his vision that he described in Revelation 13. John wrote that he saw a financial/money system in which people conducting business had “a mark in their right hands or in their foreheads” as they made financial transactions. In John’s ancient societies, money consisted of gold, silver or copper coins. John was conditioned by his society to recognize money being exchanged in financial transactions as coins changing hands. John’s vision is cryptic and gives us few specific details. However, it was clear that John had no difficulty perceiving that financial business was being conducted by latter-day people in his vision. When John wrote “in their right hands,”‘ did John see a mark of some kind being embedded in everyone’s hands or did he see this mark on the currency and coinage that everyone was exchanging in financial transactions? If everyone had an unobtrusive electronic chip embedded under their skin, how could John have even seen such a mark?

We know the technology exists to chip everyone in their hands (or other parts of their bodies) so embedded electronic chips are a very possible explanation for what John saw in his vision. However, he may have seen “the mark” of the end-time beast system either printed or engraved onto the monetary currency notes and coins being exchanged in financial transactions in the latter days. If this is the case, then what John saw may have been the logo of the final beast system which would logically be placed on all hand-to-hand currency notes and coins circulating in the world at the end of our latter days. The modern digital world has all kinds of high-tech financial transactions in equity, bond and monetary markets being conducted on computers which John could not possibly have recognized as monetary transactions unless an angel informed him of that fact. It is not even clear if John would have recognized modern plastic credit cards as a form of “money” in his vision. But John surely would have been able to recognize coinage and even paper notes as money in hand-to-hand transactions if all the notes and coins he observed all had a common mark or logo of some kind emblazoned prominently on them. When we “make change,” we almost always do so with a combination of currency notes and coins so John would have quickly recognized paper money as a medium of financial exchange. Let’s keep this additional option in mind as we consider that there are a number of possible fulfillments of the prophecy in Revelation 13:16-17. It may be people’s hands which are chipped or it could prove to be that it is the money that is being exchanged from hand-to-hand will be chipped in the latter days. It could also be a normally-invisible electronic data field of some kind on people’s hands which is illuminated only when a hand is waved under a device with a particular light spectrum to record data or financial transactions. Or it may be something that we have yet to consider. technology is changing so rapidly it may prove to be something not yet developed or deployed that John saw in his vision.

I will make one prediction that will likely prove to be accurate. Given the fact that the Australian government’s proposal involves 100- and 50-dollar notes, I’ll bet 20-dollar notes will become very popular in the nation of Australia.