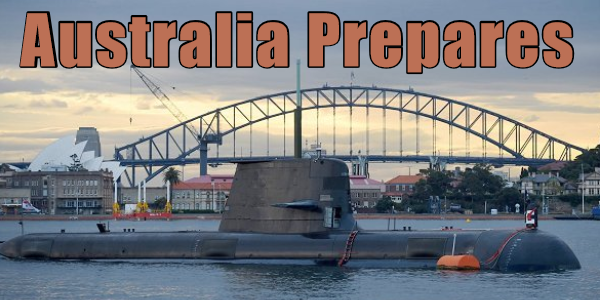 Readers of this blog are familiar with the regional and global threats posed by China’s rapid militarization programs. China’s unopposed seizure of islands in the South China Sea during the Obama administration has given China a very real strategic advantage over the important maritime trading routes that pass through that body of water. China has created several military “facts on the ground” within the South China Sea as those specks of land are now being transformed into Chinese military bases with airfields and warplanes, missiles, etc. China’s militarized islands pose a serious threat to navigation throughout the South China Sea. China was able to do this unopposed by Obama’s inept administration. If Obama had been an effective leader, he would have worked with allies in the region and militarized as many uninhabited South China Sea islands as the Chinese did–and he would have filled them with missiles aimed directly at all of China’s militarized islands. An effective US president would have built airstrips on newly-militarized islands and based warplanes on them that would have threatened the Chinese mainland. However, Obama was an extremely ineffective president, and he yielded advantages to American’s enemies and rivals all over the globe.  The world is now trying to deal with the aftermath of Obama’s ineptitude.

Nations near China, have taken steps to increase their military forces and to gradually ally themselves together vs. China’s threat. These nations include Japan, Singapore, India, Vietnam, Malaysia, Indonesia, etc. The US military is conducting more-frequent “freedom of navigation” missions in the South China Sea by flying over or sailing through China’s expansively-claimed maritime regions. Far distant from the above-named countries are the “down-under” nations of Australia and New Zealand. This post will update readers on the status of these nations’ reactions to China’s rapid militarization. Australia and New Zealand are “island” nations so they are directly threatened by China’s rapidly expanding blue-water naval fleet which can easily reach Australasian waters.

China has been aggressively pursuing a policy that will eventually surround and isolate Australia, making it easy prey if China can first neutralize the naval forces of Australia’s allies. The first link, from the Australian media, offers an in-depth analysis of China’s policy to surround and isolate Australia. I urge all readers to take the time to read it. China is building bases and airfields on islands throughout the Indo-Pacific region, and many of them would directly threaten Australia. China claims it will not militarize those bases. Only the utterly naive would believe that reassurance. China said the same thing about its South China Sea island-making projects and look at what happened there. Those islands were militarized in spite of China’s blandishments.

Australia has begun to take steps to beef up its military forces. This post will focus on its naval upgrades. Australia has ordered a dozen top-of-the-line submarines from France (second link) and a series of new frigates from the United Kingdom (third link). The first link also mentions (and shows) photos of Australia’s new class of helicopter assault ships. These are all good steps, but it will take many years before all the ordered submarines and new frigates are actually built and incorporated into the Royal Australian Navy. The fourth link expressed concerns that, given the rapidly-growing military threat from China, the Australian fleet expansion plans are too slow. No doubt, these new vessels can be built quicker than currently planned, but Australian governments would need to reprioritize funding plans to accelerate these purchases.

Australia’s principal ally in any war with China would be the United States, and the US is rebuilding its military forces as quickly as possible under President Trump. The USA is building a new class of smaller aircraft carriers, and one of them, the U.S.S. Tripoli, is now being commissioned into the active US fleet (fifth link). There was a report in the past that this new ship would anchor a new US Navy squadron that would operate out of an Australian port (sixth link). I do not know if that is still the plan, but it would make sense from both an American and Australian perspective. The US Navy would have more ships “forward deployed” to the South China Sea region, and these ships would greatly bolster Australian defense plans. Basing a squadron of US warships in Australia to work with Australian naval ships would also mean that those ships could be protected far out to sea by land-based warplanes on Australia’s northern and western coasts.

In World War II, Japan was positioning its forces to invade Australia and New Zealand by its land seizures in New Guinea and the Solomon Islands as well as a naval invasion of the Coral Sea. Thankfully, those attacks were turned back and Australia and New Zealand were spared from invasions. New Zealand loomed large in World War II as a supply base for US forces and warships ferrying troops and war material to Australia, Guadalcanal, etc. Let’s consider New Zealand’s modern situation. New Zealand is close to being an unarmed nation. It has relied on its sheer remoteness for protection. If you check a globe, you will see New Zealand is almost as far from China as it is from the USA. However, in today’s military environment, physical remoteness is no longer the protection it once was. I’m sure China has studied all US strategies and tactics in World War II. It knows that New Zealand is a prime staging area through which the USA would route or deploy forces for the defense of Australia. Knowing this, China might try to attack New Zealand in the opening phase of any world war to eliminate its ports, docking facilities, airstrips, and anything else of military value so they would be of no use to anyone. The seventh link relates that New Zealand is “belatedly” realizing that it too is under a Chinese threat, and it has ordered four new modern anti-submarine airplanes designed to locate and/or sink enemy submarines. The eighth link observes that New Zealand’s defense spending has been “stingy” compared to its actual needs. New Zealand is a small nation and cannot be expected to do more than its size will allow. However, in World War III, American warships are likely to be busy far from New Zealand’s waters and New Zealand needs some serious local defenses to defend its key facilities. It should have some modern warplanes and at least a few anti-submarine/air-defense warships. An Aegis Ashore air defense system would be ideal for its needs. Without adequate local defense forces in New Zealand, China could simply send several submarines into New Zealand’s waters and fire cruise missiles at all the strategic targets in New Zealand in the opening phase of any World War.

The above-described geopolitical situation does have a clear biblical perspective. Genesis 49 has a prophecy about all the “latter day” nations that would descend from the ancient ten tribes of Israel that were exiled from the former Promised Land, but to which they never returned. The tribe of “Joseph” (the Ephraimites and the Manassehites) are mentioned in Genesis 49:22-26 as having a common destiny in the latter days of our age (our current time). Genesis 48:14-20 also prophesied that the Ephraimites would eventually grow into a grouping or “multitude” of nations, while their brother Manassehites would grow into a single great nation. These tribes were the “birthright” tribes who inherited the best blessings that would be given to the tribes of Israel that were descended from Abraham. Hosea 1:10 prophesied the ten tribes would grow too numerous to count after they went into exile, so anyone looking for the ten tribes among scattered little bands here and there is on a fool’s errand. One must look for them among the major nations of the world. Genesis 21:12 also prophesied the birthright descendants of Abraham would be known by the name of “Issac.” After the exile of Israel’s tribes scattered them throughout the globe (Daniel 9:7 confirms they were scattered into many countries–some of which were “afar off” from Mesopotamia and Persia), they did bear the name of Isaac. The Persians called these Israelite tribes the “Saka” while the Greeks called them the “Sacae.” The Romans later changed the name to “Saxons.” The identity of Ephraim and Manasseh in the modern world is easy to accomplish. What “Anglo-Saxon” nations with brother cultures and a common language have developed into a modern group of nations allied to a single great nation? Obviously, the British nations and the USA directly fulfill those prophecies.

There is another interesting modern application of the prophecy about Ephraim and Manasseh sharing a common destiny in the latter days. The modern British, Canadians, Australians, New Zealanders, and Americans are united in an intelligence alliance called “the Five Eyes” or Project Echelon, about which I have written before. This alliance, which gathers and shares intelligence about current developments all over the world, happens to be an alliance of the modern nations of the Israelite tribe of Joseph. Ezekiel 38-39 also prophesies that a future age-ending World War III is inevitable. This war will involve the eastern alliance of Russia, China, Iran and their allies launching a surprise attack against all the modern Israelite nations and their allies.

My books on the history of the tribes of Israel document their migrations, empires, kingdoms, etc. throughout their history as well as their current locations. This information is absolutely essential in understanding latter-day biblical prophecies because the Bible’s latter-day prophecies use the term “Israel” to reference the modern nations descended from the ten tribes of “Israel.” Prophecies about the modern Jews use the term “Judah” (not “Israel”), as can easily be seen in Zephaniah 2 and Zechariah 12 and 14. There are many latter-day prophecies which discuss an age-ending World War III. They are describing the same world war, but sometimes are prophecies about events in different theaters of that future war. For example, Ezekiel 38-39 describes the war as it will affect the modern nations of the tribes of Israel in Europe, North America, Australasia, etc. while Zechariah 14 describes how that same future war will affect the Jews/Israelis of the tribe of Judah.

For much deeper information about the above topics, please read my free articles, Are We Living in the Biblical Latter Days?, What Ezekiel 38-39 Reveal about a Future World War III, The United States in Bible Prophecy and The Tribe of Joseph in the Latter Days.