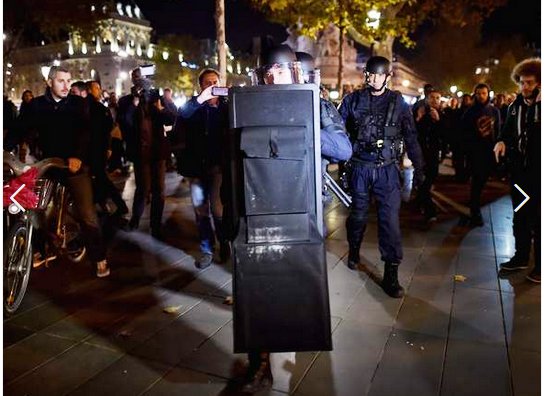 I had not intended to blog tonight, but the ongoing and current Islamic terrorist attacks in Paris make it, I believe, imperative to post during this tragic event.

Facts are coming in a staccato fashion right now, and some reports may prove to be not fully accurate. On the other hand, the damage may be worse than has been currently reported as the situation changes. The and second link offer the status of the tragic terrorist attacks as of my writing this post. I’m listening to FOX News in the background and they are reporting that one captured terrorist says he is from ISIS, and earlier reports indicate terrorists shouted Islamic slogans in Arabic and at least one other language. It has also been reported that ISIS-friendly websites are “celebrating” the attacks. Bombs, shotguns, grenades and automatic weapons were used by the terrorists, and there are reports that terrorists were executing patrons of a concert hall one-by-one after they seized control of it. One person was reportedly dismembered by terrorists near a soccer stadium where Germany and France were having a soccer match.

It has just been reported as I write this that the death toll is approximately 100 people just at the concert-hall, but that some hostages escaped or were liberated when the French police stormed the site. Based on the death tolls at other attacks sites, the death toll must be near 130 by now with more wounded. It does seem that the Islamic terrorists have taken advantage of Europe’s compassion in receiving so many Islamic refugees to infiltrate their numbers with perhaps thousands of terrorists determined to attack European citizens. It is not yet known how many terrorists have perpetrated these grisly attacks in Paris, but think how much worse this could get if thousands of terrorists all over Europe rise at once and kill European citizens in many locations?

It is very easy to believe that ISIS is behind these attacks. Media reports indicate there were at least 6-7 coordinated attacks in the city of Paris, and this requires the coordination of a large terrorist organization. ISIS has also bragged they would take advantage of the tidal wave of Islamic refugees pouring into Europe from Turkey through Greece and the Balkan nations, across the Mediterranean Sea from Libya, etc. (see third link and fourth link). Some media reports in previous days did mention that many groups of “refugees” were masses of military-age, single men, not family groups. I wonder how many of these military-age men were ISIS terrorists?

As I write this, it is being reported that Paris is now under curfew (reportedly for the first time since World War II), a “state of emergency” has been declared in the entire nation of France and that France’s borders have all been closed–no one can enter or leave. FOX-News has reported that the French military is now “on the streets” and is enforcing French laws. It is also reported that a “state of emergency” means that French military personnel can now enter all private property as needed and that the French government can censor the French media. This sounds like France is now under localized conditions of martial law.

This is a tragedy, obviously. Life in Europe will never be the same, and I think the open-ended “welcome mat” that Europe has extended toward Islamic masses entering Europe is likely to be withdrawn soon. Recently I did a post that Austrians were buying shotguns and rifles in massive numbers in anticipation of Islamic terrorist violence breaking out in Europe as waves of Islamic refugees poured into Europe. The fears of the Austrians have been confirmed very powerfully tonight. Liberal Europe may have to confront the stark reality that their citizens can and will be gunned down like unarmed sheep as long as their citizens are not permitted to own and use firearms for personal protection. France’s citizens cannot own firearms as Americans can. If French citizens could own and carry firearms, the terrorists would have been fired upon by citizens defending themselves and many lives could have been saved. The Islamic terrorists (or any terrorists) want to attack “soft targets” that are unarmed so they can do the most damage. Some Austrians are armed, and the Swiss civilian population is heavily armed (fifth link). Isn’t is interesting that the masses of Islamic refugees have so far indicated no interest in migrating to Switzerland where the citizens are armed and can defend themselves? They have flowed into the liberal European nations that don’t allow their citizens to own guns–this policy makes their citizens easy targets for terrorist attacks. At some point, European citizens may tire of being slaughtered like helpless sheep by terrorists and demand from their governments the right to own firearms as the Americans, Swiss, Israelis and Austrians now can. I expect that European nations will now press Turkey to control its border and stop refugees from pouring into Europe across Turkey’s porous border.

It is also worthy of note that the French were able to quickly shut down all their national borders. In America, due to the refusal of Presidents Obama, Bush, etc. to enforce US border laws and border security laws, President Obama couldn’t shut down the US borders in the event of  a national emergency even if he wanted to do so. The US, inexcusably, has no control over its own borders. This issue has been a huge discussion point in the GOP presidential debates so far, and these coordinated Islamic Jihadi terrorist attacks in France will make this issue even more pressing.

Some events and death totals may eventually change from those reported by media sources above (I watched FOX news, CNN, CBS and Al Jazeera America) for breaking news as initial reports may prove to be unconfirmed. However, the events are tragic and there is no doubt of it. The only question is how many have died or have been wounded. The reported death total has just now risen to 158.

One last piece involves good news. In a related story, the ever-courageous Kurdish Peshmerga have inflicted a stinging defeat on ISIS forces by wresting a key city in the Mideast from ISIS. This action will cut many ISIS supply lines between major Iraqi and Syrian cities controlled by ISIS (sixth link and seventh link). The USA sent warplanes to assist the Kurdish assault.

The Apostle Paul warned that the latter days would feature “perilous times” on our world (II Timothy 3:1). This prophecy is being proven ever-more true with the passing of each year. Surely, greater perils like ahead.