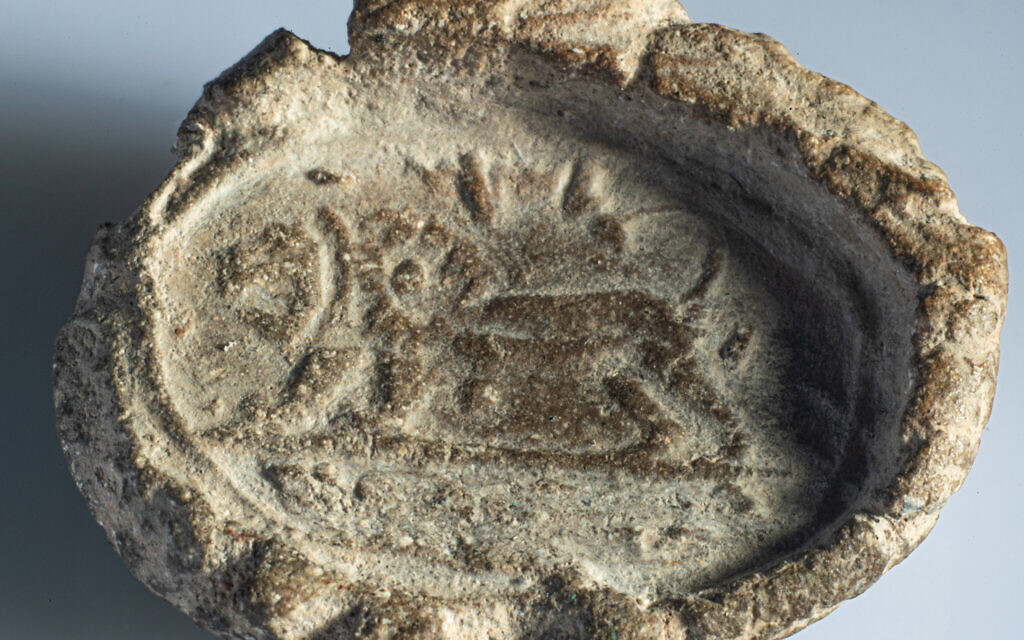 An important discovery was documented recently by a team of respected Israeli researchers. A small clay seal (called a bulla) was authenticated to date to the reign of King Jeroboam II of the ancient biblical kingdom of Israel. This scholarly team was able to prove that the seal truly was an authentic artifact from that very ancient time. The seal bore the name of an apparently high-ranking staff member in the court of Jeroboam II, who ruled ancient Israel from the early to the mid 8th century B.C. It needs to be emphasized that this king was not the Jeroboam who broke away from King Solomon’s son, Rehoboam, in the ninth century B.C., but rather a later king with the same name. This artifact was authenticated after an exhaustive scientific examination which included tests of the clay’s content and aging to accurately determine its age as well as epigraphic analysis of the Paleo-Hebrew inscription it contained (first link and second link). These links mention a previous similar and larger artifact discovered at the beginning of the 20th century, but which was later lost somehow. The third link offers more information about that lost artifact from the ancient kingdom of Israel. In a related archaeological discovery, the fourth link offers information about another discovery.

The Bible says little about Jeroboam II’s reign, but what it does say is important. His reign was at a time when God decided to show mercy to the northern kingdom of Israel and strengthen and prosper it even though they were in a steady decline due to growing sins and violations of the covenant the Israelite tribes made with God at Mt. Sinai. II Kings 14:23-29 records very important information for us. It relates that even though Jeroboam II was an evil king like the other kings of the northern kingdom, his reign was nevertheless blessed as God had mercy on the northern kingdom and gave it a respite (verses 26-27). The account even states that God “saved [Israel]…by the hand of Jeroboam,” and gave Israel military victories and an expansion of their kingdom’s domain. This is an important lesson for modern believers as it shows God can use a sinful leader to rescue his people in an evil time, and that God sometimes just decides to have mercy on a nation even if no national repentance occurs.

The discovery and authentication of this important artifact also proves that King Jeroboam II really did exist–he was not the product of the imagination of some ancient historian. Given the many attacks on the Bible’s credibility, the fact that it accurately recorded events about a king who now provably existed boosts the Bible’s credibility. It gives credence to all the Bible’s historical narratives each time an artifact or inscription is found which affirms a biblical event or person. King Jeroboam’s power and the strength of ancient Israel under his reign was much greater than even the Bible records. As the cited links indicate, excavations at ancient Samaria, the capital of the ancient kingdom of Israel, reveal that it had a fortified double-wall which was 33 feet thick! This is a very large defensive city wall by any ancient standard. So huge a wall can only be made possible with a large work force and the wealth to pay for the materials and workers to construct so big a defensive bulwark. As one link notes, such a huge wall helps explain how the city of Samaria could endure a 3 year siege by the Assyrian army before it was forced to surrender (II Kings 17:5).

The Israelites and the Assyrians fought many wars as they competed for dominance in what we call the Mideast today. The united tribes in the Israelite kingdom under Kings David and Solomon were completely dominant over Assyria as secular records record Assyria was crushed and eclipsed then. Assyria regained its power after an incredibly costly civil war between the Israelite tribes when it split into two hostile kingdoms. The Bible records a number of Assyrian-Israelite wars, and Assyrian and other secular historical records mention even more such wars. One occurred in the reign of King Ahab wherein Ahab and his allies fought Assyria essentially to a draw at the battle of Qarqar, and King Omri made such an impression on the Assyrians that the Assyrians records mention him with respect. This historical information is detailed in my printed book, Israel’s Lost Empires and my E-book, The “Lost” Ten Tribes of Israel…Found!, both of which can be obtained at my website’s home page.

Another key item in this account is that the prophet, Jonah, was a contemporary of Jeroboam II and that he had prophesied that the king would prosper in his effort to recover some of the northern kingdom’s lost territories. This would undoubtedly have made Jonah a favorite at Jeroboam’s royal court, and Jonah would have been a popular prophet in Israel as he was pronouncing good things for the nation from God. That his prophecies came to pass would have made Jonah something of a celebrity in ancient Israel, so Jonah was a rare prophet–one who was popular! The resurgence of Israel under Jeroboam also would have made Jonah personally invested in the success of Jeroboam II’s reign. Given that the entire nation was basking in the military successes under Jeroboam II, many were likely hopeful that Israel would regain ascendancy even over Assyria. In the midst of this national euphoria, Jonah received a word from the Lord which he really did not want to receive. Jonah was told by God to go to Assyria and warn them that God was about to destroy the capital of the Assyrian Empire due to its wickedness (Jonah 1:1-2, 3:1-4). Jonah flat out refused to go and sailed in a ship going elsewhere. Jonah fully expected to be slain by God for his disobedience, but God preserved his life by having him swallowed by a “great fish” (Jonah 1:15-17). Jonah was transported by God via the fish to Assyria’s shores and Jonah fulfilled his mission, but was shocked when Nineveh humbled themselves before God sufficiently to avert God’s wrath. Jonah was furious afterward, because he knew Israel’s kingdom would have again become much more ascendant if God had destroyed Nineveh much as he had Sodom and Gomorrah.

There is much that is misunderstood about the prophet Jonah. He is often called the “disobedient prophet,” but God saw something redeeming in Jonah’s motivation and saved his life. Indeed, Jesus Christ later compared himself and his calling directly to the prophet Jonah (Matthew 12:38-40). Why would Jesus do this if Jonah was merely a disobedient prophet? There is clearly much more to this story than first meets the eye, and the motivation for Jonah’s disobedience and why God refused to kill him for his disobedience is explained in my article, Jonah–The Misunderstood Prophet, which is included as the fifth link. I urge you to read it as I think you will find it enlightening as well as historically interesting. Now that we have an artifact confirming Jeroboam II really did exist, it also strengthens the faith of those who read the Bible that Jonah, the contemporary of Jeroboam II, really existed as well.