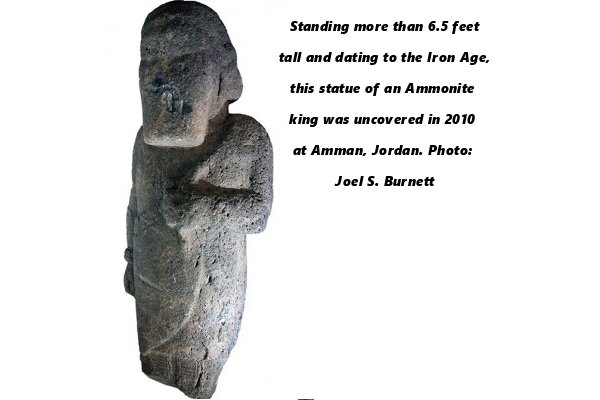 An article in the current November-December 2016 issue of Biblical Archaeology Review should be of interest to all readers of this blog who want to learn more about the history of the ancient Israelite tribes and other biblically-mentioned peoples. The article is entitled, “Ammon, Moab and Edom–Gods and Kingdoms East of the Jordan” (see link below). The article details the history of these ancient peoples who lived adjacent to the Israelite kingdoms in biblical times, and it includes photographs, sidebars, maps, etc. I am a subscriber to this magazine, and articles like these are of great value, in my judgment.

To begin with, the Ammonites and Moabites, while not direct descendants of Abraham, were both descended from Lot, who was Abraham’s nephew (Genesis 19:30-38). Edomites were the direct descendants of Abraham via Esau (Genesis 36). Given these facts, the Ammonites, Moabites and Edomites all came from the same racial, cultural and linguistic roots as did the Israelites who descended from Abraham via Isaac (Genesis 21) and Jacob/Israel (Genesis 35:10). However, the Israelite tribes were the peoples who had a covenant with the Creator God which was mediated through Moses at Mt. Sinai. The Israelites had unique obligations and duties toward God that other nations did not have.

When the Israelite tribes and kingdoms were largely obedient to God and had good kings, God showed them national favor. During these times, Edom, Ammon and Moab were often tributaries to the Israelite kingdoms (I Chronicles 18:1-11 being one case in point). II Chronicles 26:8 and 27:5 record that two later kings of Judah, Uzziah and Jotham, dominated the Ammonites during their reign. A later king of the northern kingdom of Israel, Jeroboam II, expanded Israel’s borders of dominance from Hamath in Syria to “the sea of the plain (presumably, the Dead Sea),” as is recorded in II Kings 14:25. Since the Ammonites lived northeast of the Dead Sea and Moab lived next to Ammon just east of the Dead Sea, King Jeroboam II almost certainly dominated the Ammonites and possibly the Moabites as well. Other times, the Ammonites, Moabites and Edomites were independent of either Israel or Judah or were co-tributaries to Assyria or Babylon along with Israelite kingdoms.

The article details what is known about the Ammonites, Moabites and Edomites, based on archeological and epigraphic remains of their kingdoms. The article begins with an assertion that these three groups of people “substantiates their existence…just as presented in the Hebrew Bible.” Archeological and epigraphic evidence shows these peoples lived where the Bible said they did and that they worshiped the deities attributed to them in the Bible. One excavated statute of an Ammonite king is over six feet tall. The Moabites wrote about the Israelites on their surviving inscriptions and the Moabite “Mesha stele” mentions “Omri and ‘his son.'” The mention of King Omri and “his son” (King Ahab) indicates that the northern kingdom of Israel had kings who ruled over the Moabites for extended periods of time. Kings Omri and Ahab of the northern kingdom of Israel are both recorded as being particularly evil kings in the eyes of the Lord (I Kings 16:21:34). The northern kingdom of Israel could dominate Ammon or Moab for extended periods of time because the Israelite tribes Gad, Reuben and half the tribe of Manasseh lived east of the Jordan River adjacent to Ammon and Moab. One Moabite inscription mentions “the men of Gad,” who were undoubtedly the Israelite tribe of Gad living east of the Jordan River.

A sidebar in this article states that one ancient inscription mentions, “Balaam, the son of Beor,” who is discussed as a very real person in Numbers 22-24. This inscription is interesting for more than one reason. Not only does it confirm the reality of Balaam, but the sidebar mentions the inscription in which Balaam’s name is mentioned is not specifically Ammonite, but is “somewhere on the dialect continuum among Hebrew, Ammonite, Moabite and Aramaic of the surrounding kingdoms.” A radiocarbon dating effort for this inscription resulted in a date of circa 800 BC, but that is approximately six centuries after Balaam lived (circa 1410 BC according to biblical dating systems). Either the radiocarbon dating sample was misleading or inaccurate or the inscription was part of a larger original reference that cited the historical figure, Balaam, long after he had died. The languages (and scripts) of the Israelite tribes, Ammonites, Moabites, Edomites, etc. all originated with the language that Abraham and his clan spoke when they arrived in the land of Canaan. As the centuries rolled by, they each developed their own dialect and unique written scripts. That this inscription mentioning Balaam exhibited traits of many of the Semitic scripts of nations descended from Abraham, the inscription itself argues that it was originally made in a time which was well before the differing peoples had developed their own national kingdoms, languages and scripts.

The article concludes with a series of questions about why there is such a lack of “impressive” (I understand that to mean “big”) archeological sculptures or lengthy inscriptions from the Iron Age Israelite kingdoms. I think there are at least two good answers to that question. The first answer is that the God of the Bible forbid the Israelites from making “impressive” religious altars and other structures that would be preserved for modern civilization to find millennia later. In Exodus 20:25, God ordered the Israelites to make altars out of un-hewn stones which also had had no tool used to construct them. Such altars would have been very simple piles of stones which were not intended to last for millennia. The Temple to God in Jerusalem was a notable exception to the practice of not building massive religious structures in Israelite domains. When the Israelites were obedient to this instruction, they would not have built the kinds of altars, temples, etc. that virtually all other ancient peoples built to honor their gods and goddesses. When the Israelites were disobedient to God, such structures could have been built; however, such structures were later knocked down and destroyed by righteous kings of Judah. One King of Judah, Hezekiah, destroyed the altars to the gods and goddesses of surrounding nations on an industrial scale. He not only destroyed all idolatrous altars in the kingdom of Judah (II Chronicles 30:14), but he sent his subjects into the lands of the former ten tribes of Israel to the north and destroyed them there as well! II Chronicles 31:1 records that he “utterly destroyed them all.” That would have meant not just altars, but all idolatrous statutes and images of foreign gods and goddesses as well. Hezekiah could send his subjects northward in an all-out mission to destroy all vestiges of idolatrous worship systems and structures in the former northern kingdom of Israel because its people had either been taken into captivity or had fled the land to escape the conquering Assyrians a few years earlier. A few people from the ten tribes of Israel were back in their former tribal lands at the time of Hezekiah’s mass destruction of idolatrous altars and images (II Chronicles 30:10, 18), but they were not present in sufficient numbers to oppose any of Hezekiah’s actions.

II Kings 17:18 records that the inhabitants of the old northern kingdom of Israel were gone from their old lands when the Assyrians conquered Samaria, so how could there be some Israelites back in their tribal territories a few years later when Hezekiah destroyed all vestiges of idolatrous altars, buildings, images, etc.? I think the answer is an easy one. My books, especially my printed book, Israel’s Lost Empires and my E-book, The “Lost” Ten Tribes of Israel…Found!, document that the majority of the Israelites in the northern kingdom did go into exile, but not into captivity. The Israelite/Phoenician alliance had a huge network of overseas colonies and wealthy Israelites would have taken as movable wealth, their families and servants, etc. to overseas colonies to escape the Assyrians, intending to return later. However, when they likely returned to their old estates in the northern kingdom, they expected they would be joined by many other Israelites and that the kingdom of Israel would be reconstituted (which did not happen).

The second reason why so few Israelite artifacts and inscriptions remained to be discovered or unearthed by archeologists today is that many gentile kingdoms have conquered (and destroyed) their way through the old Holy Land region over the millennia since the kingdoms of Israel and Judah fell. The Assyrians, Babylonians and many other subsequent invaders would have destroyed vast quantities of artifacts, structures, etc, that had remained from the time of the Israelite kingdoms. Rome would have especially annihilated any vestige of “Hebrew” culture in the old Holy Land. It is my view that after the Jewish rebellion which resulted in the utter destruction of the Second Temple in 70 AD (accurately predicted by Jesus Christ in Matthew 24:1-2) and the banishing of all Jews from Jerusalem and its region, the Romans would have systematically reduced to rubble and powder anything that looked like a “Hebrew” artifact, inscription, monument, artwork, etc. The Romans would have seen anything that looked “Hebrew” or “Israelite” in the former Holy Land as being “Jewish” in their eyes and they would have made a major effort to destroy it forever. They would not have cared whether anything they destroyed was from recent or ancient Jewish or Israelite historical periods. Given the zeal of the Romans to extirpate any remains of a “Jewish” or Israelite presence in the land. It is a wonder anything remained at all. In all likelihood, many descendants of the Ammonites, Moabite and Edomites then alive would have helped the Romans do this destructive work.

I recommend this article to anyone desiring deeper information about and insights to the Israelites and other ancient peoples mentioned in the Bible. I’ll bet that description includes virtually all of the readers of this blog.