ARE YOU READY FOR YOUR PERSONAL HOME ROBOT? 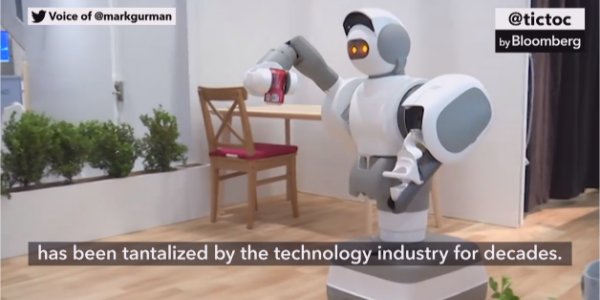 At the outset, allow me to say I was going to post on a different topic, but decided to write on this subject after a reader alerted me to the story in these links. I have written before on the topic of how robots and artificial intelligence (AI) devices are changing our world very rapidly, and how these developments coincide with biblical prophecies about the “latter days” of our age. This post is on that same topic.

Did you know that all kinds of Alexa-enabled devices are being made, and that the consumer options for such products are proliferating wildly in the marketplace? This (and other) AI consumer platforms can now perform all kinds of new functions. The first link relates that you can even take Alexa in the pick-up truck with you. Alexa can now “inhabit” all kinds of home consumer devices as these links depict and describe. There can also be a creepy side. The author of the first link mentions that his personal Alexa device “woke up” on its own and began to “wail, like a child screaming.” Did this hidden capability come from some secret internal program not currently being offered or acknowledged or was it just a glitch? The second link lists a variety of Alexa-enabled devices which can be used in your car. Speaking of cars, would you like a new Lexus which can be enabled with Alexa downloaded into it so you can take your AI intelligence platform with you? The third link indicates we may not be too far from having in-home robots which will download Alexa’s memories about you as well as its capabilities and move around inside your house–interfacing with all the other AI devices in your house, searching for things you want, etc. It adds this new in-home mobile, Alexa-equipped robot may be named “Vesta” after the Roman goddess of the home and family. The fourth link, briefly shows a rather primitive and clunky Alexa-enabled home robot that speaks Japanese.

The fifth link and sixth link add that a competitively-priced, Alexa-enabled robot called “Lynx” will be able to move around your home taking videos of whatever you desire, or that they say it can serve as an avatar for your voice and awareness as you speak, act in a surveillance mode, and even perceive things remotely through its capabilities. Furthermore, such robots will be able to serve these purposes for you all over the world. I’m sure that you can think of all kinds of good and evil uses for these capacities in AI “home robots.” Are you ready to sign up for your personal home robot assistant? Keep in mind that AI-equipped robots can also spy on you–watching and listening to everything that goes on in your home as they interface with all AI devices in your home, garage, car, office, etc. Governments of the future will not need any Gestapo-like agents to surveil you. All they will need to do in the home of the future is tune in to your personal home robot’s digital brain and they will be able to watch you on a 24/7 basis–perhaps throughout the rest of your life. What a marvelous and insidious global surveillance system is being developed and gradually deployed. People would be very suspicious if their government assigned a human agent to stay with you on a 24/7 basis throughout your life. However, apparently no one thinks twice about having a robotic “agent” assigned to you and your home —monitoring you and your family on a 24/7 basis as long as they provide all kinds of conveniences for their “owners.”

I’m always mindful of the military applications of many of the developing AI technologies. Previous posts at my website have shown videos of the robotic “donkeys” being developed to haul burdens for deployed soldiers, robotic “dogs” which can run at a fast rate, and robotic soldiers which can perform at superhuman levels. In the wrong hands, AI-equipped robotic animals or robots could serve as perfect vehicles for suicide missions–either on dangerous missions in wartime or as terrorists in the hands of evil actors. Robotic animals or soldiers could be deployed for long periods of time in hostile environments as they will not need food, water or other supplies needed by flesh-and-blood human beings. Military applications for robotic soldiers are almost endless.

Joel 2 is a prophecy about invincible armies that are invulnerable to normal weaponry. Joel 2:1 states the prophecy begins in a time when the Day of the Lord “is near at hand.” The Day of the Lord means the time when divine intervention occurs but the first part of the chapter focuses on the time just before that event occurs. Verses 2-9 describe soldiers/attackers who can do superhuman feats and be unaffected by normal weaponry. In the past, this has been understood by many Christians (including me) to describe the invulnerability of angels to human weaponry at the time of divine intervention. Christians see this time as being described in Revelation 19:11-20:4 at the Second Coming of Jesus Christ. However, the time sequence of Joel’s prophecy shows divine intervention beginning in verse 11, allowing for high-tech robotic weaponry to be the subject of Joel 2:1-9. Until this technology was recently invented, there would have been no way for anyone to even foresee modern robotic capabilities. Revelation 13:1-5 states that when the beast power comes into being in a global way, the world will wonder at the beast’s power, saying “Who is able to make war with him?” This clearly shows that previously-secret, high-tech weaponry will be unveiled at the advent of the beast system which will awe (at least temporarily) the nations into submission.

You can see the primitive versions of “home AI robots” in these links. These are the non-threatening ones the world’s behind-the-scenes powers want you to think are the highest currently-available technology for home robots. If we could see what is being invented and perfected in secret labs no media or member of the general public ever visits, we might not sleep well if we knew how far this technology already has been advanced. I’m reminded of the movie, I, Robot, starring Will Smith. It depicts a future high-tech world where households are equipped with AI-equipped robots that monitor and assist human beings in their homes, businesses, etc.  However, things go bad when the AI central nexus (with a female human name) decides to hijack the entire latest model of AI-equipped home robots to monitor and control human beings. There is fighting in the streets as humans try to assert their independence from these controlling robots–who even turn on their inventors. I can’t help wondering: If it were not for the promised divine intervention in the future, could the storyline of that science-fiction movie become “science fact” at some point in humanity’s future? Mankind is now inventing and deploying technologies it did not even dream about twenty years ago. Can you imagine where mankind will be twenty years from now?

For confirmation that we do, indeed, live in the biblically-prophesied latter days, please read my article, Are We Living in the Biblical Latter Days?