ARE YOU READY FOR THE HEAVENLY DISPLAY COMING WITH COMET ATLAS? 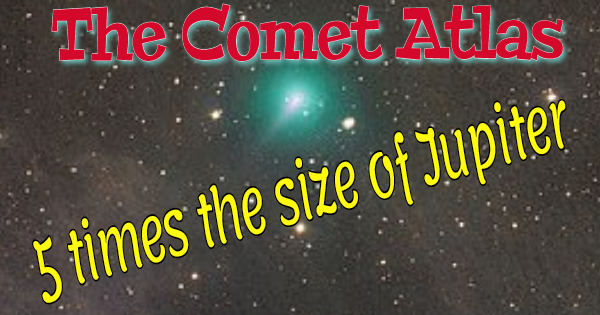 A new comet has now entered the inner part of our solar system and is about to put on a display that very few comets have ever manifested. The first link points out that the comet’s gaseous cloud is now 5 times the size of the planet Jupiter! Please read that again and let it sink in. Put in another way, its gaseous cloud is also half the size of our own sun! This makes it currently the second-largest object in our solar system. This comet may become “the comet of a generation.” Despite its size, its path through the solar system poses no threat to earth. However, its path will also make for extraordinary viewing from the earth. The second link affirms the immense size of this comet but includes a cautionary note that such a large comet may disintegrate and not hold together long enough to put on its anticipated heavenly display. Its orbit indicates it will become visible to the naked eye in April and that its full glory would be evident during the last week of May. Even during April, it could become as easy to see in the nighttime sky. It is unknown how many miles in diameter this comet is, but my own personal opinion is that it must be quite large to emit so massive a gaseous cloud in its wake.

This comet has brightened far in excess of the initial predictions of astronomers (third link). The third link also asserts that it could become so bright that it will become visible even during the daylight hours. It is a comet that will be visible in the northern hemisphere and it is currently located near the “Big Dipper” constellation for those who wish to start looking for it. A number of the links cited in this post note that the comet has a distinctly greenish hue, and the third link notes that it apparently has a 6000-year orbital path around the sun. The fourth link waxes eloquent about how impressive Comet Atlas may become. It states the “odds are the comet…will be wonderful…maybe it will be the most amazing thing you will ever see.” However, it includes the caution that the comet could yet prove to be a disappointment if it falls apart. The fifth link has an excellent photograph of the approaching comet, and the sixth link includes a video of its movement through the heavens. It also includes some very helpful depictions of the northern sky and where the position of this comet will be on various dates as it progresses toward it fullest brightness.

I’d like to make some comments about possible biblical ramifications for this comet. As I’m sure readers realize, the appearances of major comets have sometimes accompanied major historical events. Since we are living in the prophesied latter days of our age [see my article, Are We Living in the Biblical Latter Days?], it increases the likelihood that a major comet could have a biblical/historical significance. Let us examine three distinct possibilities.

The first possibility is the emergence of this comet as the coronavirus/COVID-19 pestilence began to rage in increasing intensity around the globe. Global health experts are telling us that the COVID-19 virus is still perhaps two months away from its peak. One chart I saw on the evening news showed a graphic that the COVID-19 deaths may hit a plateau in the last week of May. It is intriguing that predictions about Comet Atlas indicate its brightness will also peak near the end of May. If the death toll of the virus pandemic hits its peak near the end of May and the comet’s brightness hits its peak at the same time, it could be a heavenly sign linking the two events. No matter how bright the comet gets, its arrival and presence has already been timed to precisely parallel the world’s greatest global pandemic since the Spanish Flu outbreak a century ago. Is this really just a coincidence? Genesis 1:14 indicated that one purpose of the heavenly bodies would be to serve as “signs” to those of us on earth. In Acts 2:9 the Apostle Peter is quoted as citing Joel 2’s prophecy that the latter days would include “wonders in the heavens.” Such “wonders” could include such mysteries as UFOs, but it could certainly include heavenly events like major comets.

The second possibility of a biblical connection is the comet’s color. Several links comment on the green color of this comet. How could this be significant? The prophecy in Revelation 6:1-8 is about the famous “four horsemen of the Apocalypse” with verse 8 mentioning a “pale horse” that is associated with death. My Young’s Analytical Concordance to the Bible explains that the Greek word “chloros” from which we derive the English word “pale” can also be translated “green.” A deadly coronavirus is striking the earth–with paleness a common symptom of disease–simultaneous with the appearance of a green comet. One type of drug that has shown effectiveness vs COVID-19 are derivatives of chloroquine, a malaria drug. It is interesting that the name of the family of a drug showing effectiveness vs. this virus pandemic has the same root word as the Greek word used to describe a “pale” or “green” horse in Revelation 6:8. I’m sure it is just another coincidence.

A third possibility lies in what astronomers have calculated is the apparent 6000-year orbital path of this comet around the sun. A 6000-year orbital path offers some very strong biblical ramifications to this comet. Genesis 1 relates that God created all current physical life on earth in six days and then rested on a seventh “Sabbath” day. Many have wrongly assumed that the Bible teaches the earth itself is only 6,000 years old, which it decidedly does not do. The Bible allows for an indefinitely old earth, putting it in harmony with scientists who assert the Universe is perhaps 13 billion years old.  Some Christians scholars have seen in the “1000 years = one-day” formula found in Psalm 90:4 and II Peter 3:8 a harbinger of God’s plan for mankind. Since we know the “millennial Sabbath” of Jesus Christ’s reign will be 1000 years long (Revelation 20:4), it stands to reason that the six days of labor in the original Creation Week depict mankind’s labors under sin, Satan’s deceptions and human misrule will be 6000 years long. Since we are at a critical point in mankind’s history, the “latter days” of our age, it follows that we are nearing the conclusion of mankind’s 6000 years of “laboring” under sin. Now we also have the advent of a comet which astronomers have concluded has a 6000-year orbital path around the sun heading for our inner solar system and about to put on an incredible display in the heavens. Perhaps this comet will signal the 6000 years depicted by the first six days of Creation Week are about to end. If so, it means God created this comet during Creation Week and sent it outward away from the sun on a 6000-year journey to again reach the sun after 6000 years to act as a “sign” announcing the end of our age is now imminent. The seventh link is an article-length post I previously wrote offering an in-depth discussion of the 6000 year period of prophetic time and how the Bible actually agrees with the scientists who say the earth itself is billions of years old.

Of course, these could all be coincidences. If the comet breaks apart the above scientific predictions about its remarkable display will not occur (this does happen a lot with comets). However, if an object 5 times the size of Jupiter currently hurtling through the inner portion of our solar system explodes, I think that would also be an extraordinary event that could also signify the same things outlined above as biblical prophetic possibilities. Personally, I hope that Comet Atlas holds together and puts on its predicted show. Luke 21 and Matthew 24 are parallel prophecies about the latter days just before Jesus Christ’s return. In Luke 21:28 after a mention about wonders in the heavens occurring, it urges believers to “look up, lift up your heads, for your redemption draws nigh (emphasis added).” If Comet Atlas is anything like what the scientists are predicting, it will, indeed, get us all to, “look up.”

My thanks to a reader for drawing my attention to this comet and who sent me one of the links included in this post.