ARE THE BRITISH HEADING FOR A “HARD BREXIT?” 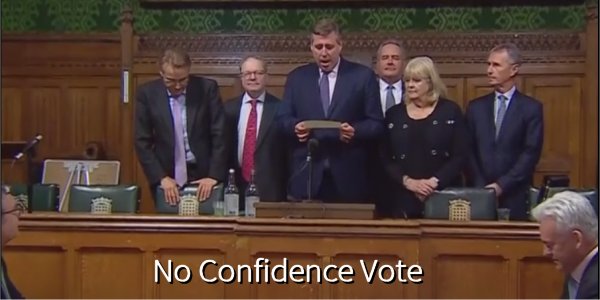 Once again, my blogging attention is focused on the United Kingdom’s complicated Brexit process, which has become steadily more confused due to two events since I last posted on this topic. Prime Minister May refused to let the House of Commons vote on her own “Brexit” deal on December 11th as she had promised would happen, and she survived a confidence vote in which only those members of Parliament within her own party could vote. While things are very much in flux in this matter, the UK, in my opinion increasingly looks to be headed toward a “Hard Brexit” as things stand now. Allow me to elaborate and direct your attention to some items that are being little discussed in most media accounts.

First, Ms. May reneged on her commitment to have the House Of Commons vote on December 11th regarding her own Brexit package because she knew it would go down to a resounding defeat. This vote may now be delayed to perhaps January 21st of next year. Then Ms. May survived a confidence vote within her own conservative/Tory party via a 200-117 vote. This means that just under 40% of her own party members in the House of Commons want her gone! Since the other parties in Parliament want her gone as well, it seems clear from this math that Ms. May would likely lose a vote of confidence vote if it was put to the entire House of Commons. I think she is trying a ploy which amounts to a long shot to avoid a Hard Brexit, but it may be her only chance. There is a large majority in the House of Commons opposing her deal with the EU, but her opponents are in several different camps and would likely go separate directions after her deal is voted down or if she is removed from office. I think Ms. May is delaying the vote on her deal as long as possible in the hopes that the coalition opposing her will go their separate ways before the deal is voted upon. For example, some opposing the deal want a second national referendum on Brexit. If there is no vote on Ms. May’s deal before late January, it will be evident that there will be insufficient time for any such second referendum before the March 29th date on which the United Kingdom leaves the EU in one way or the other. Will they still oppose the deal if they know there will be no second referendum? We will see. Make no mistake about what is occurring in the UK. It is a titanic struggle between the globalists who want to have the UK become subservient to the EU and the nationalists who want full sovereignty for the UK after March 29th.

The first link is from the USA Today, a reliably globalist/Leftist publication. Its analysis includes Ms. May’s statement that “if she was forced to step down, Brexit could be delayed or stopped altogether.” What does she mean? The legal deadline for the UK’s exit is March 29th. It matters not whether Ms. May is the Prime Minister by then or not; the date is a hard date for the UK’s exit from the EU. The Brexit referendum approved by the British people did not include any language that the Brexit would not occur if Ms. May was no longer Prime Minister after the two-year negotiated exit period expired. How would her exit from No. 10 Downing Street stop the legal Brexit date? Ms. May did not make clear any reasons for her assertion. I think she is trying to create a fear that need not be feared.

The second link is a better analysis of the current Brexit process. It observes that the 200-117 vote in her own party leaves Ms. May “a weakened leader who has lost the support of a big chunk of her [own] party.” One member of her own party called it “devastating.” Ms. May’s only hope seems to be convincing the EU leaders to give her a better deal, but the link echoes the reporting of many media reports that the EU is not going to give her a better deal. Unless I’m missing something in British law, Ms. May has no power to call a second referendum either. All she has is the power to ask the House of Commons to vote for a second referendum. This seems unlikely as the House of Commons firmly pledged to abide by the will of the people in the first referendum which voted to “Leave” the EU. The third link explores a number of options which might ensue, but I want to call readers’ attention to a critically important statement near the end of the text where it states under the heading “Britain leaves with no deal:” that “technically this is the default option.” That word “‘technically” is very important. It means that if no deal is approved by the House of Commons, the legalities of the matter will result in a Hard Brexit on March 29, 2019. Under a Hard Brexit, the UK would again be a fully sovereign nation and no EU laws or rules would apply within the UK. This is actually what the people approved in the Brexit referendum. They voted to “Leave,” not “Remain” in the EU. Ms. May’s proposal would result in the UK being, significantly governed, perhaps indefinitely, by the EU, but without any vote in the laws that would be applied by the EU to the UK. The link also raises the possibility that the House of Commons may take charge of the Brexit process if Ms. May’s package is voted down. Conceivably, the Speaker of the House of Commons could appoint a committee to draft a proposed agreement which, if passed by the full House of Commons could be presented to the EU as a final “take it or leave it” proposal. The globalists are desperate to stop any such action which would see the UK acting as a sovereign nation again.

The fourth link, written in September, noted that British companies were already then preparing vigorously for a Hard Brexit by ordering many goods and products from EU nations in advance of the March 29th deadline. Indeed, they were ordering so many products to prepare for a Hard Brexit that the UK was starting to run out of warehouse space, especially for cold storage items. On December 7th, the Wall Street Journal had a good article documenting that this process was accelerating to the point that “storage space in the UK is running out.” I could not provide a link to this article as it was for subscribers only if accessed on the internet, but I saw the article in a newsstand copy I bought so I’ll offer a few quotes for readers to consider (I suggest you consider going to a library to read the full article). It adds that “Everybody is looking to stockpile…everything you can think of.” It cites as an example, “Airbus…the European aerospace giant has said it’s planning right now is based on a ‘no deal’ outcome (emphasis added).” This fact of British businesses storing everything imaginable for a Hard Brexit on March 28, 2019, speaks volumes. While the politicians and leftist media sources propose an endless series of options to avert a Hard Brexit, businesses have to live in the “real world,” not in a theoretical world. Businesses throughout the UK are feverishly preparing for a Hard Brexit on March 29th. They realize the legal reality that if no deal passes the House of Commons, a Hard Brexit will occur. A Hard Brexit means the nationalists win. Passage of Ms. May’s deal means the globalists win. It is still possible a split decision might occur which is different than what Ms. May and the EU want.

There are biblical ramifications to this matter, but I examined them in my recent post entitled: House of Commons Holds May Government “in Contempt” as 12/11 Brexit Vote Nears.  To read my discussion of those ramifications, I urge you to read that post as well.