ARE SOUTH KOREA AND THE UAE PARTNERS IN BUILDING NUCLEAR WEAPONS? 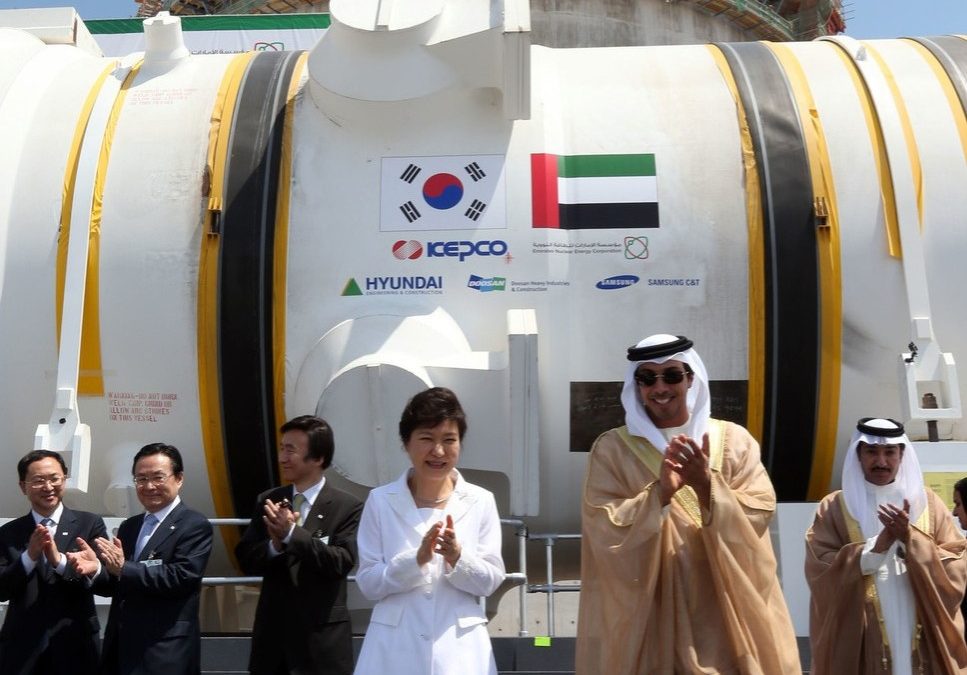 Why isn’t this leading news reports all over the world? I think that reports of a new nation obtaining nukes to defend itself is not what the insider elites want to have made known so they are downplaying this report. If this kind of report led the news segments, many more nations might start building nuclear weapons too. One factor cited in the first link’s report that South Korea is ready to have nukes is Joe Biden’s shocking weakness in how he withdrew US forces from Afghanistan. If Biden could betray an ally like Afghanistan’s government–with which it was allied in warfare vs. the Taliban for many years–can any nation trust the USA as long as Joe Biden’s administration is in power? I think many nations believe the answer is “no” even though they might not say it publicly. It may be that Biden’s support of Ukraine to resist Russia’s aggression is an effort to try to win some trust back to his administration. The first link also notes that South Korea has already demonstrated it can successfully deploy submarine-launched ballistic missiles (a fact likely not widely known). Therefore, South Korea already has the ability to deploy nuclear warheads as soon as it gets them. The second link affirms the information reported in the first link, but it adds that there is a complication. South Korea is a signatory to the Nuclear Non-Proliferation Treaty, which would normally prohibit it from seeking nuclear weapons. However, South Korea is directly threatened by North Korean nukes and South Korea does not live in “normal” times. When a nation’s survival is at stake, its leaders and people will not be held back from taking steps to protect themselves by a piece of paper.

Where does the United Arab Emirates (UAE) fit into this picture? South Korea and the UAE have had close ties for many years, a fact not generally realized by many. The third link shows that South Korea and the UAE have signed agreements that have greatly deepened their ties. These agreements were signed during a state visit to the UAE by South Korean President Yoon Seok-Yeol when he met with the UAE President, Mohammed bin Zayed Al-Nayhan (I have seen media reports with varied spellings of these two leaders’ names). The story reports that South Korea has already built three nuclear reactors in the UAE which have already gone “on line” and a fourth one will soon follow. The article reports that among the many areas of cooperation between the two nations are military and nuclear cooperation. While not stated in the article, having active nuclear reactors means that unspecified amounts of enriched Uranium and Plutonium are being created in the UAE inside South Korean nuclear reactors, and we all know what kind of bombs can be built with those radioactive elements. Perhaps that is why South Korea’s President stated that South Korea could become a nuclear power “pretty quickly.”

North Korea has periodically tested its nuclear weapons to intimidate Japan, South Korea, the USA and Taiwan. When/if South Korea decides to reveal it has become a nuclear power, the optimum time for it to demonstrate that fact would be to detonate a South Korean nuclear warhead right after North Korea detonates another of its nuclear warheads. Such an event would radically rearrange the politics of the Indo-Pacific region. I think world financial markets would also be affected.

There is one other nuclear alliance that receives almost no publicity. Iran has long been aiding North Korea’s nuclear weapons program. It was known years ago that Iranians were working in North Korea’s nuclear efforts. A 2015 report by the Daily Beast (updated in 2017) documented Iranian involvement with North Korea’s nuclear program (sixth link). This makes sense. Iran knows that it’s nuclear program inside Iran could be attacked by Israel and/or the USA. Therefore, it makes total sense for Iran to locate much of its nuclear-weapons program inside North Korea. This also explains why North Korea, a nation that cannot even sufficiently produce enough electricity for its people, can build high-tech weaponry and nuclear warheads. This raises the possibility that Iran’s real nuclear weapons program is located in North Korea and the nuclear facilities inside Iran are mostly decoys for Israel and the USA to attack. If this is true, you can be sure South Korea and the UAE are well-aware of it. This means we have two “secret” nuclear alliances at work: The Shiite Iranian-North Korean alliance and the Sunni UAE-South Korean alliance.

If you hear a report in the future that South Korea and the UAE have tested their own nuclear warheads, readers of this blog should not be surprised. It isn’t even necessary for those nations to detonate a nuclear device to have a deterrent effect. These nations could let Iran and North Korea know via diplomatic back-channels that the UAE and South Korea have already deployed nuclear weapons to gain a measure of deterrence against Iran and North Korea. I certainly won’t be surprised if South Korea (or the UAE) detonates a nuclear device as a test in the future. In the seventh link and eight link, you will see that I previously posted in 2010 and 2018 about a South Korean nuclear weapons program and the developing South Korean-UAE alliance, so I’ve been following this matter for some time.

The nations (and their leaders) do not realize that they are fulfilling a Divine “script” that was written for them to fulfill in our modern era. Biblical prophecy reveals that we are living in a period called “the latter days” or “end times” when our human-ruled age will soon come to an end. My article, Are We Living in the Biblical Latter Days?, offers much evidence that this is true. If you have not read it, I urge you to do so. You will learn the Bible has prophecies with great detail about our modern age–confirming that only a Divine Creator Being could have both foreseen modern events and have the power to make sure his prophecies are implemented on his Divine timetable. In Isaiah 42:21-26, 42:9 and 46:9-11, the God of the Bible challenges mankind to look at his prophecies and his ability to bring them to pass many centuries later as proof of his invisible reality and his utter sovereignty. My research report, What Ezekiel 38-39 Reveal about a Future World War III, lists and explains not only the “latter day” prophecy in Ezekiel 38-39, but it also examines them in light of the rest of the Bible’s latter-day prophecies. Since the Bible’s prophecies have been provably coming to pass in our modern time, I think you owe it to yourself to see what biblical prophecy says will happen in our foreseeable future.