Are Russia and the USA Close to War? 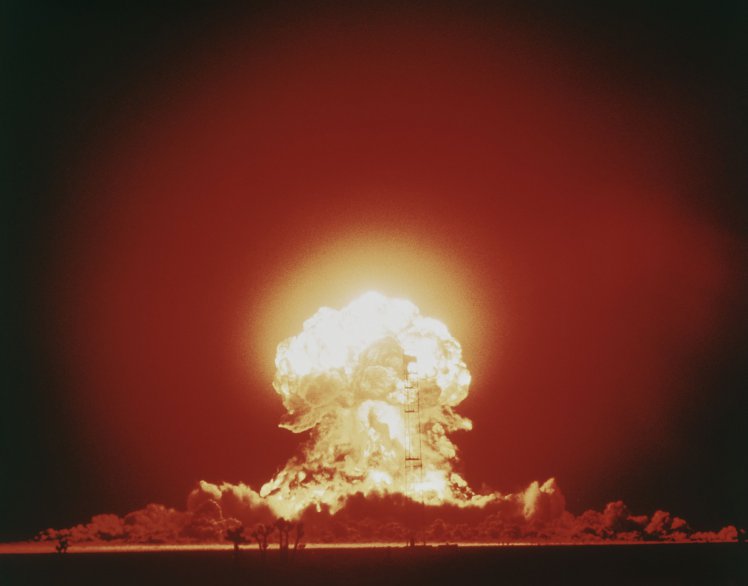 Amidst the ad nauseam media coverage of the US presidential race, there are some stories which really do deserve to receive more attention. One is the very vital matter of whether the USA and Russia are heading for war. Many Americans likely don’t even know about this even though much of the rest of the world knows about it. This post has a lot of links with much information so I’ll get to the heart of the matter quickly.

Russia has informed its citizens that a nuclear war with the USA “could” happen soon (first link). Is this just Russian “bluster?” Russia is not acting like it’s only “bluster” or saber rattling. How did this start? As you know, Syria is in the midst of a long and horrendous civil war which began as an effort to oust the Russian-backed Syrian leader Assad. The USA, Turkey, Saudi Arabia and others were reportedly behind this action. This war has dragged on and morphed into a global crisis with ISIS coming into existence as a horrific spin-off of this war and a tidal wave of Islamic immigrants exiting the Syrian (and Iraqi) war zones–causing an immense political and cultural crisis throughout Europe. The USA and Russia were conducting negotiations on trying to find an armistice or and end to this civil war when these negotiations broke down. Predictably, each side blamed the other for this breakdown of communications. The USA reportedly gave some kind of an “ultimatum” to Russia along with some kind of “threat” (second link and third link). The fourth link reports that the USA and France conducted airstrikes against Syrian civilians, killing perhaps 120 people. The USA also admits killing 62 Syrian soldiers in another airstrike (fifth link). The USA says it was an accident. Russia is clearly not convinced that was the case.

Russia is taking a variety of war-preparation actions. Russian leader Putin cancelled a trip to France to meet with French leader Hollande after Hollande asserted Russia could be charged with war crimes for its conduct in Syria (sixth link), and we can consider French-Russian relations to be in the deep freeze right now. Russia took the unprecedented step of having 40,000,000 of its citizens participate in war evacuation/shelter exercises in case Russia is attacked by the USA and its allies (seventh link). The link reports that 50,000 emergency units (presumably vehicles) were mobilized for this drill. Conducting this kind of drill is very expensive and disruptive. I think it needs to be mentioned that this kind of major action usually occurs when war really is expected, and Russia has built an immense network of underground shelters for its people [contrast this with the USA where the elites have built underground shelters for establishment insiders and politicians but not for the general public]. Nations usually do not spend this kind of money for mere saber-rattling purposes, if that is what Russia has done. Russia is also deploying an aircraft carrier and other naval warships to the Syrian coast to substantially increase its military power in that region (eighth link and ninth link). Russia also sent two strategic bombers on a very warlike-looking mission over the Western European region, causing fighters from the UK, Norway, France and Spain to scramble to intercept them (tenth link). The eleventh link reports that Russia has been “doubling” its military transport flights to Syria carrying large tonnages of unspecified military cargo. It also adds that ten Russian warships have been spotted sailing through the Bosporus on their way from the Black Sea to the Eastern Mediterranean region, and that Russian air-defense systems are making Syrian airspace a “no fly zone” for American and allied warplanes. It is also worth noting that the twelfth link reports that the USA still has a X-37B (a small, unmanned version of the space shuttle) deployed in earth orbit–where it has been for approximately 500 days (it has a very long “loiter time”). It is assumed that this space-based US aerial vehicle has unspecified military capacities (a satellite-destroyer?, a “space bomber? both missions?).

Perhaps the most ominous action taken by Russia has been to urge Russian children and families studying or traveling abroad to cut short their overseas visits and return home to Russia (thirteenth link). Urging one’s civilian nationals to leave foreign nations in a time of military tensions used to be a prelude to war. Whether it is such a signal this time remains to be seen, but it is an ominous step. Even former Soviet leader Gorbachev warned about the level of acrimony that now exists between the USA and Russia (fourteenth link).

I’ve also seen on the Internet some reports that the USA is painting some of its F-16s in Russian warplane colors and paint patterns, reportedly as a step to conducting a false flag operation in which US warplanes would conduct bombing missions that would then be blamed on Russia. Given the deceptions and counter-plots in the Mideast, this is a possibility, but I think that a more benign explanation is likely the case in these reports. The USA has long painted some US warplanes in the color-schemes of Soviet, Russian and other national air forces for US pilots to train against them in air exercises. This makes such war games more realistic. The USA has long had a squadron of airplanes painted in “enemy” colors to “fight” against US pilots in aerial war games. This squadron has been called the “aggressor” squadron, and they do have F-16s painted in Russian warplanes’ color schemes (fifteenth link and sixteenth link). I suspect that whoever originated the photos of American F-16s painted in Russian colors used “off the shelf” photos taken of the “aggressor” squadron’s warplanes. I’ve long known of this “aggressor” squadron. Decades ago, my brother was an officer in the USAF and served as a Weapons System Officer (WSO) in F-4 Phantoms. He participated in these aerial war games (called “Red Flag” exercises), and he told me he also mingled with the combat crews of the aggressor squadron. To make the air combat drills more realistic, he told me the US aggressor flight crews were trained to think and act like Russian fighter pilots (my brother has been deceased for over a decade). If there really were US warplanes in the Mideast being painted secretly with Russian warplane color schemes to carry out clandestine missions, do you think they would be parked out in the open in broad daylight on a taxiway or airport apron for all to see (as shown in the photos of US F-16s supposedly being painted with false flag colors)? No, this would be done inside hangers with no windows and their flights would only be at night. However, it is possible that any nation or non-state actor could conduct false flag operations to start a war that might not ordinarily begin. If a war does begin, please recall the old truism that “truth is the first casualty of war.”

Nevertheless, the Russian actions do argue that they are seriously preparing for a war with US and allied forces, and they are doing so at great expense. This is a fact that needs to taken very seriously. It is a cause for concern that in a tense situation like this, the Obama administration has staffed its leadership ranks not with professionals but with leftist ideologues. That makes war more likely due to foolish mistakes. I also do not see yet any evidence of Russia starting an offensive war; it seems to be preparing to fight a war in which it is the targeted nation. However, a regional war is possible.

Jesus Christ warned that there would be “wars and rumors of wars” in the latter days of prophetic time leading up to his return (Matthew 24:6), and a “rumor of war” between the world’s two great nuclear superpowers is the most dangerous war possible. We will have to see if a war erupts or not. Arguing against such a war is the fact that the USA and NATO have militaries which are dangerously small and the US military has long been over-deployed and worn out. It is not ready for a major war, and the US civilian population is weary of warfare. It would take quite a “false flag” operation against US forces or targets to enlist the support of US citizens for any war at this time. If the USA and Russia do get involved in a regional war against each other, other nations will try to get it stopped as quickly as possible due to the extreme dangers that escalations would bring. Also, I cannot see that any such war at this time would be a fulfillment of the Ezekiel 38-39 war, which is prophesied to occur at the very end of this age of mankind’s allowed period of self-rule. Too many major prophecies have not yet been fulfilled which must occur before this final climactic war occurs. The current global financial/monetary/political system called Babylon the Great in Revelation 17-18 has not yet been toppled by the “seven heads and ten horns.” The beast power of Revelation 13 and 17 has not yet appeared on the scene and neither have the prophesied Two Witnesses sent by God nor the False Prophet who will be allied with the beast’s political leader. For those wanting more detailed examinations of these prophetic topics, I urge you to read my free articles: Are We Living in the Biblical Latter Days?, Is Babylon the Great about to Fall—Ushering in a Global Beast System?, What Ezekiel 38-39 Reveal about a Future World War III, and The Two Witnesses. These articles will give you a biblically-based perspective on current and future world events that you will never find in any secular media source.