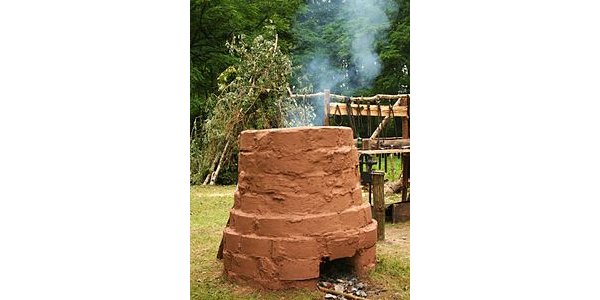 This post is a result of my watching an episode entitled “The Dagger of Tutankhamen” on the cable-TV program, What on Earth? The program examined an especially high-quality iron dagger found in Egypt and attempted to link it to an ancient iron foundry site, Tel Hammeh, that was located just east of the Jordan River in modern Jordan (first link). It examined that option for its origin as well as the possibility that the iron dagger may have been made of extraterrestrial iron ore that fell to the earth’s surface via a meteor. As an avid fan of ancient history, that captured my interest, but my interest grew much greater when this episode led to a biblical connection (that was not examined in the cable TV show).

The program mentioned that this ancient iron ore smelting facility near the Jordan River dated to approximately 1000 BC. This caught my attention as that date is within the time of the reign of King David of Israel when he ruled over all the united tribes of Israel. A comparison of the description of the location of Tel Hammeh that is found in the third link with its location in the time of King David puts this iron smelting facility in the Israelite land of Gilead–the portion of the ancient territory of the Israelite tribes which lay east of the Jordan River. Specifically, it appeared to me to be located in what was in ancient Israelite times the territory of the eastern half of the tribe of Manasseh.  In 1000 BC, Tel Hammeh would have been in Israelite territory ruled by King David.

Would David have had any use for an iron foundry? By all means! Not only did he need iron smelting facilities for manufacturing iron weapons and common implements for daily use, he had another reason for having iron smelting facilities for a reason very close to his heart. King David had wanted to build a Temple in Jerusalem to honor the God of Israel, but God told him that his son would be the one to build such a Temple (II Samuel 7:1-16). Although David was not allowed to actually build the Temple, he did amass a huge quantity of iron and copper ores and materials that his son, Solomon, would use to build the Temple. I Chronicles 22:1-19 records that David had his nation accumulate iron and copper ores and objects beyond weighing or measurement for the Temple project (verses 3, 14 and 16). Verse 3 mentions iron nails and joinings for the Temple were made in immense quantities so David had to have iron foundries to refine iron and copper ores into finished products. That the Tel Hammeh site includes a dating of circa 1000 BC (first link) would affirm the biblical accounts of David manufacturing iron ore products in his kingdom.

If you scroll down in the second link, you will note that there is evidence that Tel Hammeh was used for iron smelting from the 10-8th centuries BC. These dates match well the time of the ancient northern kingdom of Israel. The third link also mentions a date of 930 BC for smelting activities at Tel Hammeh. That date would put smelting activities at this site in/near the latter part of the reign of King Solomon and/or the first part of the northern Kingdom of Israel’s rule over Tel Hammeh. It also mentions a date of 750 BC as being near the time when smelting activities ceased at this site. The above dates match remarkably well the biblical dates for the reigns of Kings David, Solomon and the time when the end was approaching for the kingdom of Israel. David amassed voluminous quantities of refined iron objects for the Temple, and Solomon would have continued smelting iron (and copper) ores throughout his reign for his many building projects in the kingdom of Israel. That a date near 750 BC marks the end of smelting activities at this site is very significant. The northern kingdom of Israel finally fell completely with the fall of its capital city at Samaria circa 732-721 BC (II Kings 17:5-6). However, the northern ten tribes went into exile and/or captivity in stages. II Kings 15:27-29 records that the Israelite lands east of the Jordan River were conquered in a previous invasion by the Assyrians and that invasion would have included the capture of the Tel Hammeh iron smelting site. The last king of Israel, Hoshea, lost Samaria in the ninth year of his reign and the Israelite regions east of the Jordan River were conquered by Assyria in the reign of the previous king of Israel, Pekah, who reigned twenty years. Putting these dates together, we reach a very credible date near 750 BC for the end of the Israelite rule over the region east of the Jordan River (where Tel Hammeh was located). Obviously, the site would have been abandoned by the Israelites when the Assyrians conquered it. I think there is little doubt that the Tel Hammeh iron smelting site was an Israelite metalworking site used from the time of Kings David and Solomon through the end of the Israelite rule over that site near the middle of the 8th century BC.

The  cable-TV program mentioned in the first link said nothing about what I think was the obvious Israelite nature of the Tel Hammeh iron smelting site. The archeological dates match perfectly with the biblical dates for iron smelting activities in the Israelite kingdom, which ruled the Tel Hammeh site. It is typical of the modern anti-biblical bias of secular scientific efforts that all Israelite connections are either censored from scholarly discussion or severely downplayed. Modern secularism wants to cling to its Big Lie of evolution, and anything that conflicts with that Big Lie and which affirms the Bible gets dropped from the text books and historical articles.

There is much more interesting material involving the topic of where David and Solomon mined much of their vast quantities of iron and copper ores. My books examines the secular and biblical evidence that the Phoenician/Israelite empire was a globe-girdling, maritime empire with colonies and mining stations located all over the earth. King Hiram of Tyre, the leading “Phoenician” city, had been a long-time ally of King David (II Samuel 5:11-12), and that alliance continued during King Solomon’s reign and the other main “Phoenician” city of Sidon is also cited as being in alliance with the Israelites (I Kings 5:1-10). The mariners of Tyre and Sidon merged their navy with the navy of Israel and shared their maritime secrets with the Israelites as they commingled their naval crews (I Kings 9:26-28 and 10:22-27). One Israelite fleet returned only every third year with cargoes including apes and peacocks so it traded with locations in Africa and Asia. Those locations would have been accessed via Solomon’s trading fleet based at Eilat on the Red Sea (II Kings 26), but where did the Phoenician/Israelite fleets based in their many Mediterranean Sea ports sail to? My books cite secular records showing Phoenician- and Hebrew-speakers were present in the ancient New World so their destinations included New World ports-of-call in their itineraries. Secular history also records that the ancient copper mines in the American Great Lakes region were “worked to exhaustion” around 1000 BC–during the reign of King David when he was amassing copper ores beyond calculation. There are also records of Phoenician inscriptions being found in South America, and I believe the Israelites (with the junior partners from Tyre and Sidon) under David and Solomon mined considerable amounts of iron ore from what is now the modern nation of Brazil. Does that sound far-fetched to you? If so, why then does the modern nation of Brazil have the consonants of B-R-Z-L, the same as the consonants of the Hebrew word for iron? That Hebrew word is “barzel,” with the consonants of B-R-Z-L. Is it not interesting that the nation of Brazil still is known by the Hebrew word for one of its commodity exports (iron ore). Ecclesiastes 1:6 mentions the Israelites in Solomon’s time knew about the circular trade winds that whirl about on the earth. Ships from ancient Israel, Tyre and Sidon would have entered the Atlantic Ocean at Gibraltar (then controlled by the Israelites and Phoenicians) would have sailed westward to the New World via southerly route that would follow the trade winds to modern Brazil and they would have returned to their home ports by going north to catch the eastbound trade winds in the northern Atlantic and sailing east to the British Isles (where the Phoenicians mined tin) and via European shores before entering the Mediterranean Sea again via Gibraltar.

There is much evidence presented in my books that document that the ancient kingdom of Israel became the primary global power at the time of Kings David and Solomon. II Samuel 7:9 states David became a great king like the great kings of the earth, and I Chronicles 18:3 records David’s Israelite army reached the Euphrates River and soon afterward defeated a coalition of armies which included the Mesopotamian nations and their kings, which would have included the king of Assyria and his vassals (II Chronicles 19::6-19). King Solomon inherited David’s conquests and began his reign in a global position of dominance over the other kings of the earth, who paid him tribute (I Kings 10:24-26). I’ll bet the foundry fires at Tel Hammeh’s iron-smelting facility were operating in high gear all during the reign of Kings David and Solomon.

For the full story of just how great the Israelite superpower was in the ancient world, I invite you to order either my 4-book set on Israelite history or my E-book, The “Lost” Ten Tribes of Israel…Found!, either of which can be ordered via the book links at my website’s homepage. One reason why the very-ancient Israelite empire has been forgotten is that the time of Kings David and Solomon was already regarded as “ancient history” by the time Julius Caesar was born (!), and the time between Caesar’s reign and our modern time is twice as long as the time between Julius Caesar and Kings David and Solomon. If you have not yet read my books, I urge you to do so. Your view of history will never be the same as the dry and dull history of the world that is taught in modern history texts.