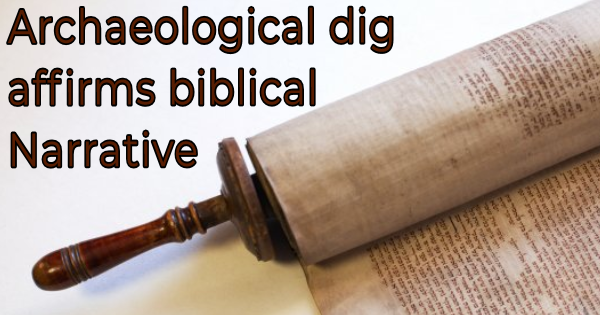 A recent archaeological find in the region of Israel where the Old Testament Kingdom of Israel was located has confirmed historical information found in the biblical narrative about the time when the ten tribes of Israel were exiled from their old northern kingdom. This information comes from an article in the Summer 2020 issue of Biblical Archaeology Review (first link), and it involves the time in history after the final Assyrian invasion of the northern kingdom resulted in the exile of all the northern tribes from the Promised Land. The tribe of Judah, however, still remained in the Promised Land in the southern kingdom of Judah for about another 140 years before it too was sent into exile (II Kings 17:18).

II Kings 17:1-41 records that when the Assyrians drove out or took captive the members of the ten tribes living in the northern Kingdom of Israel, they imported a new population of Mesopotamians to inhabit the cities and territory once inhabited by the Israelites (see verse 24). These newcomers served a variety of foreign deities, and some even made human sacrifices to their “gods” (verses 29-34). Verse 29 calls these newcomers the “Samaritans,” and these transplanted Mesopotamians were almost surely the forefathers of the Samaritans who lived in the Promised Land during the time of Jesus when the parable of the “Good Samaritan”‘ was given by Jesus (Luke 10:29-37).

At an archaeological site named Tel Hadid located not far from Tel Aviv, excavators discovered a number of tablets in Mesopotamian scripts, one of which was dated to 664 BC. This date was several decades after the Assyrians destroyed the northern kingdom of Israel, and it fits precisely the time-period after the expulsion of the northern ten tribes when the Mesopotamians forcibly imported by the Assyrians were taking root in that region. If the biblical narratives about the removal of the Israelites and the importation of Mesopotamian is true, these kinds of tablets are exactly what should be found in that region of the Holy Land. The near-by ancient strata at Gezer have resulted in similar Mesopotamian finds. Clearly, these archaeological finds validate the biblical narrative that the Assyrians replaced the exiled Israelites with imported Mesopotamians. As the article notes, Assyrian records also confirm this historical fact. In this situation, one will not find any reference to a known biblical personality as has been the case in some other archaeological finds, but it does confirm that the historical context for the biblical narratives is accurate.


In light of the departure of the Israelite tribes from the old northern kingdom due to the final Assyrian invasion, I’d like to make some observations about what happened to the ten tribes, which took decidedly different routes out of the old northern kingdom of Israel. When the Israelite capital city at Samaria fell circa 730-720 BC, much of the northern kingdom had already been depopulated for years. In a previous Assyrian invasion years before, the tribe of Naphtali was taken captive and removed from the land as were the tribes of Reuben and Gad and half the tribe of Manasseh (who lived in “Gilead” east of the Jordan River. That previous invasion took roughly a third of Israel’s population captive to the Assyrian region of Mesopotamia. The remaining tribes knew that defeat and deportation were inevitable for them if they stayed in the land, so they left in several different waves to avoid Assyrian captivity. This is affirmed by the account in II Kings 17:24-25 that lions were numerous in the old kingdom of Israel when the final Assyrian invasion occurred. Lions become numerous when prey species have no humans to harvest them and when few humans are present as rival predators. II Kings 17:5-6 also states that during the final invasion of Israel, the Assyrians went “throughout all the land” but there is no mention of them finding any Israelites still present in the land other than in the capital city of Samaria. This is totally logical. Ask yourself a key question: If you were an Israelite then, would you rather stay and go into certain slavery or would you rather emigrate and remain free? Almost everyone left before the final Assyrian invasion occurred.


The main body of the ten tribes leaving Israel decided to emigrate overland to a region near the Black Sea which would be defensible against the Assyrians. This migration is discussed in II Esdras 13:39-50. That account states they went to a “more distant land” through the upper Euphrates river region (modern Turkey) to get to the Black Sea region. In verses 41-42, it also records these migrating Israelites were determined to obey God better than they had done in Israel. Later, the region they migrated to and inhabited was called “Scythia” by the Greeks. Greek history records that the Scythians forbade idolatry and scrupulously forbade the keeping or sacrifice of swine. These are obvious Old Testament Torah practices with a clear Israelite heritage. The Scythians grew very powerful and twice defeated the mighty Persian Empire in wars. While the most in-depth examination of the Scythians’ Israelite origins can be found in my book, Israel’s Lost Empires, many of the main points can be found in my article about the Scythians (second link).


Other Israelite tribes fled the inevitable, final Assyrian invasion via the Phoenicians’ sea routes. The Israelites had been a part of the Phoenician Empire for centuries, dating back to the original alliance between King David of Israel and King Hiram of Tyre (II Samuel 5:11-12) which was continued under King Solomon (I Kings 5, 9:26-28). Even as late as King Ahab of Israel, this alliance was solid as the evil Ahab was married to the even more-evil Queen Jezebel of Sidon’s royal house (I Kings 16:31). During this Phoenician Empire period, the Israelites had a strong maritime tradition, even sending fleets on oceanic voyages that returned every third year with animals and exotic items from other continents (I Kings 10:22). Even in the period of the Judges centuries earlier, the tribe of Dan had a very strong maritime history (Judges 5:17). Faced with the final Assyrian captivity, many Israelites fled to Israel/Phoenicia’s overseas colonies in Kirjath Hadeschath in North Africa (later called “Carthage” by the Romans), Iberia (later called Spain), Briton and Hibernia (later called the British Isles and Ireland). etc. An article on the ancient Israelites’ maritime skills is found in the third link. The Israelite colony called Carthage later became an empire in its own right and almost defeated Rome in the Punic Wars. Carthage’s history is also detailed in my book, Israel’s Lost Empires. The Israelites migrating by sea tended to be the wealthier Israelites and those who retained Baal worship. The Israelites who migrated into Scythia by land were those who could not afford tickets on the escaping ships and who were choosing to restore some key Torah practices into their society.


Many have the incorrect impression Assyria took all the Israelites captive. The Assyrians took approximately one-third of the Israelites captive, while the other two-thirds fled Israel in the years before the final Assyrian invasion. Only several tribes are mentioned in the Bible as being conquered by the Assyrians. The rest of the tribes fled the region to maintain their independence and freedom. All were “exiled,” but not all were taken captive. The prophet Daniel affirmed that the ten tribes of Israel were, by his lifetime, scattered all over the world into many other countries (Daniel 9:7). Daniel refers to the Israelites who were “near” and those who were “far off” from where Daniel lived. The Israelites “near” Daniel were the descendants of the original Israelites taken captive by the Assyrians and relocated into Mesopotamia and the now Iranian region inhabited by the ancient Medes (II Kings 17:6). The Israelites “far off” from where Daniel lived were the Israelites who escaped to the Scythian region north of the Black Sea, Carthage in North Africa, Spain, and other Celtic regions of Europe, the British Isles, etc.


Those Israelites carried captive by Assyria into the region of modern Iraq and Iran later fulfilled a prophecy in Isaiah 14:1-2 that they would eventually rule over the nations and empires who had taken them captive or ruled over them. After being captives of or subject to the Assyrians, Babylonians, Seleucid Greeks and Achaemenid Persians, these captive Israelites became known as the Parthians and rose to great power, ruling over all the peoples and territories of the aforementioned empires. Parthia became so powerful that it was regarded by the Roman Empire as an equal, and Parthia won more wars against Rome than vice versa. Parthia’s impressive but largely overlooked history is examined in my book, Parthia, the Forgotten Ancient Superpower. To follow the migrations of the Israelite tribes throughout history and to learn where they are in the modern world, you can find this information well-documented in my book, Israel’s Tribes Today.


The ancient Mesopotamians carried captive by Assyria to the old Kingdom of Israel and whose artifacts are being dug up in modern Israeli archaeological digs (first link) had a very modest role in history. The ten tribes of Israel, in whose ancient land they were resettled, grew immensely more numerous after they went into captivity and rose to found many world empires, kingdoms, and nations. Hosea 1:6-10 prophesied that the Israelites would vastly increase in numbers after they went into exile, and that is exactly what happened. Their entire story is found in my 4-book set documenting the history and migrations of the ten tribes of Israel. These books can be obtained at the home page of my website at stevenmcollins.com.

[ As an update, I wish to inform readers of two developments. The first is that I have been diagnosed with carpal tunnel syndrome in both hands/wrists, and I am under “doctor’s orders” to limit my time at a keyboard too, hopefully, allow my hands the opportunity to heal without surgery. Millions of keystrokes over the decades have taken a toll. As a result, I wanted to alert readers as to why there will likely be greater intervals in the future between posted blogs on my website. If I do not let my hands rest, surgery will be inevitable at some point, and then there would be a long hiatus until blogging could resume.


Secondly, I have an adult daughter who will be recovering at my house after this week’s arch-reconstruction surgery in her left foot. She had an “accessory navicular bone” removed from her arch, and her main arch ligament was severed and sewn together after removing a piece of it to fit her reconstructed arch space. She also had a second operation on the outside of her left foot to insert a cadaver bone to “push” her foot’s bones back into proper positions. She can put no weight on her foot for four weeks and will move about with a “knee scooter.” After four weeks, she will begin weeks of physical therapy. She is in much pain, and I’ll be her primary “24/7” caregiver during her recovery (although two family members will help at times), so that is another reason necessitating longer intervals in my blogging schedule for the next two months.


Those readers who feel moved to pray for our healing are very much thanked by both of us!]