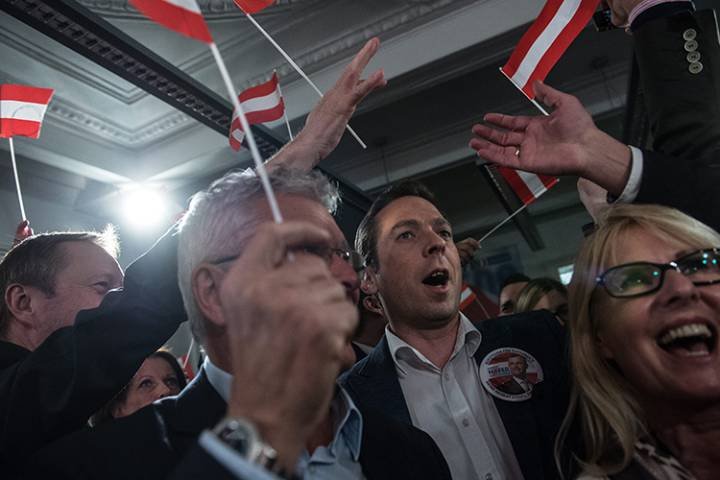 Here in America, our media is concentrating on every nuance of the US presidential election and all but ignoring news from the rest of the world. However, history was made in the recent Austrian presidential election. The political coalition that has governed Austria since the end of World War II was ousted from office in a landslide. The decisive winner was the leader of a rightist, anti-Islamic immigrant party that is surging in popularity inside Austria. He easily won the first round in the election, but will face a runoff election with the second-place finisher in the recent election. As a sign of how massive the anti-immigrant groundswell was inside Austria, the two parties that had formed the longstanding governing coalition finished a distant fourth and fifth in the election. The first link and second link offer details about the Austrian election.

The Islamic immigration into Europe, followed by a publicized crime wave on the part of Islamic immigrants and their unwillingness to assimilate into European culture, has fostered a strong and growing backlash on the part of European voters. The Austrian vote has served notice on all elected governments in Europe that they may also face electoral defeat unless they take an anti-Islamic immigration position. Previous posts have documented strong opposition by the resident populations in Balkan and Central European nations against any further such immigration. The third link examines the strong opposition by Hungary’s Prime Minister Orban to any further Islamic immigration. He slams the EU bureaucracy for their pro-immigration policies and increasingly seems to refuse to recognize their right to impose EU edicts on Hungary or other European nations. Alluding to the crime wave perpetrated by Islamic immigrants, Orban has said anti-immigrant actions must be taken to protect Europeans from “gangs chasing our women” and he further warns of the “destruction of Europe” if further immigration is allowed.

It is with some reluctance that I include the fourth link as it involves strong subject matter involving the kind of sexual crimes being committed by Islamic immigrant men against European women and women in general in other parts of the world. However, I decided to include it to document to readers just how bad the situation is becoming as we cannot remain insulated from the evil that is increasingly running amuck in our world (a recent post on Saudi Arabia included a dramatic link that a Saudi TV commentator acknowledged the dangers posed by terrorism within Islam). The fourth link is from a website that tracks instances of persecutions and murders of Christians by Muslims and also Muslim immigrants’ crimes inside Europe. If you do not have a strong stomach, you may not want to read the fourth link. These types of crimes happening inside Europe are either not reported or are downplayed in the mainstream American media, but the shocking information in the fourth link very much explains why Austria just voted heavily for an anti-Islamic immigration presidential candidate as the heinous crime that is discussed in that link happened inside Austria. It also explains why Hungary’s Prime Minister warned about “[Islamic] gangs chasing our women.” There was a wave of sexual assaults perpetrated by Islamic immigrants against European women in Germany and other EU nations during New Year’s Eve celebrations and these were given some coverage in the world media.

Recently, there was an agreement reached between the EU and Turkey to impose some limitations on unchecked Islamic immigration through Turkey into Greece and, from there, into the rest of Europe. It was the subject of a recent post. The fifth link discusses some of the diplomatic and legal obstacles which may prevent that agreement from being implemented. If it is implemented in some form, it could break down very quickly if (A) more heinous crimes are committed by Islamic immigrants inside Europe and (B) if immigrants from many Islamic nations obtain fake Turkish passports and use them to infiltrate into European nations with Turkish complicity. If that happens, Turkey will be the big loser as all Turkish passports could lose their validity or trustworthiness inside European nations. It is also possible that some European nations will simply ignore the EU-Turkish agreement altogether.

The growing crisis inside Europe reminds us of the Apostle Paul’s prophecy in II Timothy 3:1 that “perilous times” will characterize the latter days of our current age. We do not yet know the final extent of the ramifications of the Islamic immigrant crisis inside Europe, but it needs to be watched carefully. This is likely to get worse before it gets better. Indeed, the EU as we know it may collapse due to the threats to European nations posed by the immigrant crisis. One thing is clear: Germany’s and Chancellor Merkel’s leadership of Europe is in decline due to this crisis. Merkel’s political party suffered major reverses in recent German regional elections due to Merkel’s “open doors” policy toward Islamic immigrants. If the immigrant crisis continues to worsen, even Merkel’s government could collapse. It is very clear from the Austrian presidential vote that the Austrians want no part of any modern “Anschluss” with Merkel’s pro-immigrant policies.

Before American readers think that “this doesn’t affect us here in the USA,” I urge you to read the sixth link. It reveals that ISIS Jihadis already have made plans to smuggle Islamic terrorists into the USA across our largely-porous US-Mexican border. Who knows how many are already here…hidden among the Islamic immigrants that have already been brought to America. If a savage Islamic terrorist attack is perpetrated against Americans inside America, Don Trump will likely be elected as the US President…by a landslide. He’s made it clear that he will “take the gloves off” in his war on ISIS and he will remove Obama’s ridiculous rules of engagement that hinder the ability of US military forces to wage an effective wear against ISIS. Based on the Republican primary results so far, growing millions of Americans believe him…and like him as a result.

I’ll leave you with a thought that sheds much light on how rapidly attitudes are changing inside Europe because of the immigration crisis. The first link reports that the leader of the anti-immigrant party in the recent Austrian presidential election acknowledges that he sometimes carries a pistol. Knowing that, the Austrians gave him a decisive victory in the first round of Austria’s presidential election. That speaks volumes about how dramatically things are changing inside Europe.