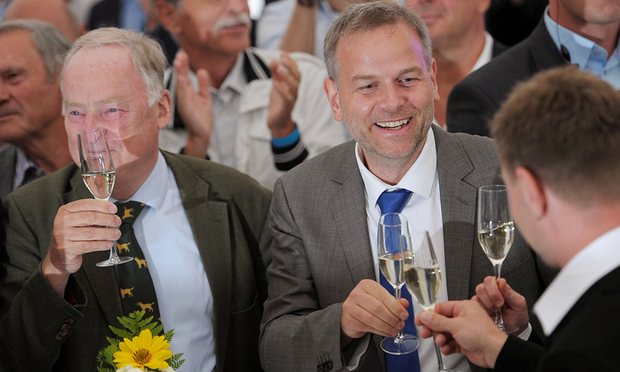 As readers surely realize, the European nations have been inundated with a tidal wave of Islamic immigrants recently. This has led to huge stresses within Europe as the Islamic immigrants generally have no interest in assimilating into host European cultures, have engaged in criminal acts against host populations and Islamic terrorists have entered Europe after being embedded within the ranks of the immigrants. One of the prime architects of this Islamic-friendly policy has been German Chancellor Angela Merkel. She used to be a dominating figure in European politics, but her policies which consistently result in the interest of the Islamic immigrants being put ahead of host European populations has seen her star fall rapidly. Other European nations have been moving to protect themselves from further Islamic immigration, even if that puts them at odds with the policies of the EU bureaucracies.

Merkel’s political party has suffered greatly due to Merkel’s pro-immigrant policies. In a string of regional elections within Germany, a new, three-year old political party which is dedicated to an anti-Islamic immigration policy has risen rapidly to take seats in a number of regional elections. Now, Chancellor Merkel has suffered her greatest defeat to date. In an election in her own home region, Merkel’s party was just defeated by the new anti-immigrant party. The first link and second link report the details of this huge electoral blow to Angela Merkel and her party. Her home region is in the former East Germany, and the socialist party still came in first, followed by the anti-immigrant party. But there are three very significant conclusions to be drawn from this election. One is the observation that every established political party had its share of the regional vote reduced significantly from the most recent regional election, and the new anti-immigrant party vaulted into a strong second-place finish (Merkel’s’ own party finished third). The second is if Merkel can’t even win her home region, her political party faces almost certain electoral defeat if it nominates Merkel in the next German national election. The third is that every other nation and national government in Europe followed these election returns closely. Merkel’s great defeat in her own region will surely embolden anti-immigrant, anti-EU parties everywhere in Europe and the liberal socialist governments still in power can see “the handwriting on the wall” that pursuing pro-immigrant policies will result in their losing power in future elections.

As crimes and/or terrorist acts are perpetrated by Islamic immigrants inside Europe and as they try to impose their Islamic culture and Sharia law on their host nations, the voters of European nations will turn increasingly to politicians who will stop pro-immigration policies and will crack down on immigrant crimes. It is not hard to envision future national elections inside European nations where new rightist governments will insist that Islamic immigrants must either assimilate into European culture or “go home.” Already, the United Kingdom has approved its Brexit vote to leave the pro-immigrant EU with fears of crimes by Islamic immigrants being one factor in that vote. The British are likely once again glad that their islands are separated from Europe by sizeable bodies of water. Masses of Islamic immigrants who can’t get to the UK are clogging up the French port of Calais, which is the scene of riots by Islamic immigrants which are sometimes so violent the police have to flee the scene (third link). Dutch voters are nearing their next national election and an anti-EU, anti-immigrant party is poised to take power (fourth link). Significantly, the fourth link also reports that Dutch polls show increasing numbers of Dutch voters feel the EU itself is doomed.

Mark October 2 on your calendars for an important date in the future of the EU. Austria held a presidential election earlier this year, but its outcome (in which a leftist candidate just barely defeated an anti-EU candidate) turned out to be tainted by election irregularities. An Austrian court ordered the election to be done over (fifth link) and the new election will be held on October 2 (sixth link). This date is also important for neighboring Hungary. The sixth link also reports that Hungary is holding a national plebiscite on that same date to instruct its government whether to abide by or to defy the EU’s pro-immigration policies and imposed immigration quotas for EU nations. If the anti-EU sides win both votes, the EU will receive two major “sweeps” toward the dustbin of history. Of the two votes, it is my view the one in Hungary is more important. Austrian presidents have mostly ceremonial powers, but if Hungarian voters empower their national government to defy the EU’s immigration rules, this vote will put real “teeth” in the anti-EU movement.

The seventh link adds that Poland, Slovakia, Hungary and the Czech Republic all have turned strongly against Islamic immigration, much to the chagrin of the EU’s bureaucrats. Slovakia’s leader, Robert Fico, is vehemently opposed to any Islamic immigrants (seventh link) and doesn’t want any Muslims in the nation at all! The last link reports that Fico won Slovakia’s recent election, but by a lesser margin than expected. The last link comments that Fico may have trouble forming a new government, but if so, that is not necessarily good news for pro-EU types. Fico is a leftist who is also a pro-Catholic, anti-Islamic immigrant nationalist. If he cannot form a government, a rightist coalition may take power in Slovakia which will be even more anti-EU and anti-immigration than is Fico.

The above developments confirm that Europe is a continent in strong ferment, and all it needs is a unifying spark or rallying point to unite against the EU, Islamic immigrants and the “establishment” in general. I do not predict when or how this will happen, but such an occurrence is likely. The Bible offers one possible candidate for that ultimate “spark.” Many Christians expect that the beast and false prophet foretold in the book of Revelation and II Thessalonians 2 will be Europeans. That outcome is not certain, but it is certainly possible (play on words intended). Both Revelation 13 and II Thessalonians 2 foretell that the false prophet (or “man of sin”) will do real and/or apparent miracles to enthrall the masses, who will follow them blindly. When such a figure emerges, it is not just Europeans but peoples all over the world who will follow them…just as blindly. Both the above-cited biblical prophecies reveal that this miracle-working religious leader will be directly inspired by Satan the devil. People who know their Bible will see through the deception, but most professing Christians know little about their Bible’s content. At about the same time the beast and false prophet arise, God is prophesied to send two miracle-working prophets called the Two Witnesses (Revelation 11), whose miracles will far exceed those of the false prophet empowered by the devil. Will you be able to tell the difference? Please read my article, The Two Witnesses, which addresses this prophecy. The information in that article should equip you to easily tell the difference so you are not among the deceived.