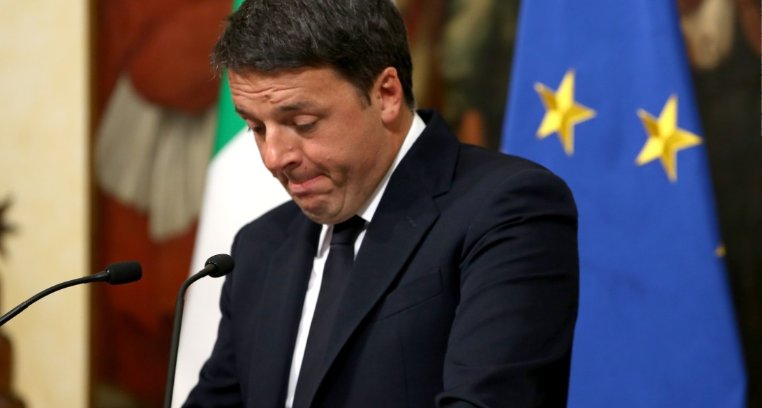 The results are now clear in the voting in the Italian constitutional referendum vote and the Austrian presidential vote. The anti-EU populists won a decisive victory in the Italian referendum vote and the Italian government of Matteo Renzi has fallen as a result of the outcome. In a decisive vote, Italian voters voted to reject Renzi’s constitutional changes, and Renzi resigned his position as Italy’s head-of-state (first link and second link). What happens next is somewhat unclear, but it could result in new elections in which anti-EU parties would actually form the next government. This is an important matter to which we need to pay continuing attention. Given that British voters have rejected the EU in their Brexit vote and Dutch voters are likely to elect an anti-EU government in their early-2017 elections, if Italy elects an anti-EU government as well, it will be a major blow to the chances for the EU continuing to exist, as we know it. If the French elect the National Front’s Marine Le Pen in their 2017 national elections, it would mean rejections of the EU in the UK, France and Italy–three of the four largest EU nations. Germany would stand alone among the top four EU nations as being pro-EU. How could the EU and the Euro survive in their current form if that happens?

The first link also has a very important commentary on the effect of the Italian vote on the Italian banks which are in danger of either insolvency or failure. If the Italian banks actually collapse, it will trigger a major financial crisis throughout the Eurozone and likely the world due to all the mega-billions of dollars of bonds, derivatives, etc. to which the Italian banks are counter-parties. As noted in my recent post about whether the EU and Euro will survive, this could lead to a crisis which leads to the fulfillment of the biblical prophecies in Revelation 17-18. I’m not specifically predicting such an outcome now (I don’t set dates!), but the digital interconnections that unite all global financial markets are very vulnerable to a collapse in a major nation’s banking system, as my aforementioned post also noted.

The pro-EU forces narrowly won the Austrian presidential election, so the pro-EU forces do have something to rejoice about (third link). However, the victory of the anti-EU forces in the Italian election is far more consequential as it has already led to the resignation of Matteo Renzi and the fall of the current Italian government. The Austrian election was much less important as the Austrian president has mostly ceremonial powers only. Austria’s governmental status is unchanged by its vote.

For balance,  I thought I’d enclose the fourth link from Newsweek. Newsweek is a far-left, pro-globalist media organization, but I thought it would be useful to enclose an article from it so readers could see what the far-left thinks of the rising tide of anti-EU sentiment throughout Europe. As you will see, they have a very different perspective than do the growing anti-EU, anti-globalist forces. In both Europe and the USA, anti-globalist sentiment is becoming the majority viewpoint of the voters who want no more of the exceedingly self-indulgent and out-of-touch elites who have run virtually all western governments for the last few decades. Revelation 18:3 prophesies that the political and private mercantile elites that have jointly run the global system called Babylon the Great in Revelation’s prophecy of the latter days will be exceedingly self-indulgent and corrupt. Sound familiar? The voters of many nations are seeing the same thing now, and globalist governments are starting to fall. This indicates that the fulfillment of Revelation 17-18’s prophecy is drawing closer.

The world currently pays no attention to biblical prophecies. After major biblical prophecies begin to be fulfilled, they will have no choice but to pay attention to them. That is when we will see if there is any meaningful repentance on the part of the world’s populations for rejecting God and his laws. If they don’t, things will get worse.