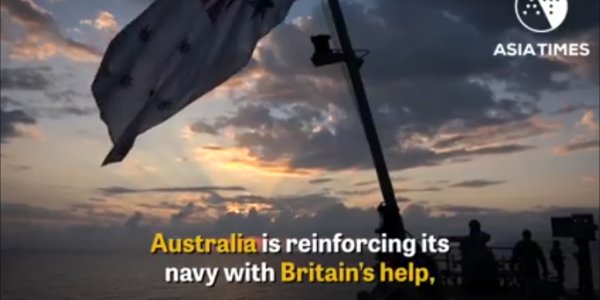 Previous posts have commented on the nations whose military forces are coalescing into an alliance to counter China’s aggressive militaristic build-up in the Pacific Region. This alliance-building process is picking up steam and I wanted to update readers about it. The first link details Australia’s new military purchases, which include 9 new frigates to be built in the United Kingdom, 12 submarines to be built in France, 12 anti-submarine patrol aircraft from the USA, etc. It will take some time for these military additions to be delivered; however, as the link shows it will be many years before this new weaponry is built. It also mentions the “Five Eyes” intelligence-gathering network that includes the USA, Australia, the United Kingdom, Canada and New Zealand, about which I posted some time ago. It also mentions a Five Power Defense Arrangement that includes Australia, the United Kingdom, New Zealand, Singapore, and Malaysia–an alliance about which I have not previously heard. The link states that this alliance is “hostile” to Chinese attempts to assert sovereignty over the South China Sea.

The second link focuses on the intentions of the United Kingdom to build up its naval deployments to the Indo-Pacific region to the point that the British Navy becomes a “permanent” military presence in that region. The British naval units will depend heavily on the US Navy’s extensive support facilities in the region. The link also adds that one of the new British aircraft carriers will be assigned to the Indo-Pacific region in a new cooperative arrangement with the USA and France to ensure that at least one carrier is always stationed in that region of the world. Further cementing the new ties of the British Navy to the Pacific Region is a new trilateral defense agreement between the UK, Japan, and France. The third link details a joint naval exercise held recently between the American and Malaysian navies. As readers can see, there is significant progress in building ever-stronger ties between NATO nations and Pacific Region nations threatened by China. It is in their mutual interest to work together to oppose Chinese expansionism, and the more aggressively China pursues a policy of militarism, the more it will hasten cooperation between NATO and Indo-Pacific region nations. Readers will notice that these links are from Asian media sources as it seems to be an unfortunate fact that western media sources are ignoring these important developments.

China continues to pursue an aggressive international agenda. The fourth link reveals that there has been a series of tense encounters between American and Chinese warplanes in the South China Sea region, and China is now even considering deployment of military forces to Syria (!) in support of Russian and Iranian efforts there (fifth link). The sixth link shows a propaganda film China is using to indoctrinate Chinese soldiers to be ready for war. The Trump administration is obviously very concerned about the very overt Chinese militarism, and is moving to reinforce Indo-Pacific region military and political cooperation in an “overt anti-Chinese narrative” (seventh link) The nations cited in that link that are cooperating in this effort are the USA, Australia, Vietnam, Malaysia, the Philippines, Indonesia, Japan, India and South Korea.

For approximately three decades, I have warned in writings and live presentations (available at the “speeches” link at my homepage) that a global World War III was going to occur at the very end of our age and that it would pit two powerful alliances against each other, according to the biblical prophecy in Ezekiel 38-39. That prophecy indicates that a final world war will begin with a surprise attack by the Gog-Magog alliance (Russia, China, Iran and their allies) against an alliance led by the modern nations of the house of Israel (the supposedly “lost” ten tribes of Israel) who are found in NATO and related Western alliances. These NATO/Western nations will be allied to a group of Indo-Pacific region nations. These are exactly the alliances that have formed (and are forming) in the modern world as the stage is being set for the final war of our age. It will be a war so deadly and lethal that Matthew 24:21-22 refers to it as a “Great Tribulation” to befall the world which would cause the extinction of all fleshly life on earth if it were not cut short by the return of Jesus Christ. Ezekiel 39-39 was written approximately 2500 years ago. That it has so precisely foretold the membership of global alliances that would exist in our modern world just before this age-ending war occurs confirms that it had to be authored by a Creator God who knows the future and can orchestrate events to fulfill his prophecies. God himself challenges people to watch his ability to fulfill his biblical prophecies as proof of his invisible reality and sovereignty (Isaiah 41:21-26, 46:7-11). The world has overwhelmingly rejected God and his Bible, and in doing so they have blinded themselves to the fact that modern nations are simply acting out a script which was written for them millennia ago by an eternal Creator God. For much more information on the above topics, please read my free articles, What Ezekiel 38-39 Reveals about a Future World War III, Japan in Biblical Prophecy, The United States in Bible Prophecy and Are We Living in the Biblical Latter Days? If you read these articles, you will not be blind to the “script” that is being implemented in modern geopolitics.