Another Islamic Terrorist Attack in France 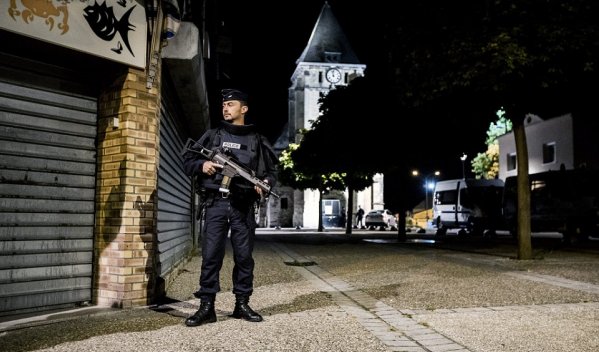 Just yesterday, I wrote a post about how close France was to a civil war due to Islamic terrorist attacks, according to France’s own Security Chief. Just one day later, France’s latest Islamic terrorist attack upon French citizens was especially grisly. Two Islamic terrorists entered a church service in Normandy, France and slit the throat of a French priest in front of his congregants who had been held hostage (first link). The second link goes on with many accounts, stories of European terrorism, pictures of the slain priest, etc. If you scroll far enough down, you will see that ISIS has declared that its next targets for terrorist attacks will be London and Washington, DC. We’ll have to wait and see if this happens.

I do wonder: When are the Western World’s leaders going to get off their duffs and do something about this worsening threat? French President Hollande is quoted as saying that France is now at war with ISIS. Yeah, right. I’ll believe that when I see it. So far, his “war” is only a war of words. Not only are the western world’s leaders doing nothing to stop the terrorists, some, like Germany’s Chancellor Merkel, are actually facilitating the terrorists by inviting into Europe a tidal wave of Islamic immigrants–among whom terrorists infiltrate into Europe. US Republican Party nominee, Donald Trump, says that he will take the war to ISIS and destroy them quickly if he is elected the US President. I believe him.

I think the citizens of Europe will eventually become tired of being under constant threat and being killed like helpless sheep whenever terrorists decide to attack them. At some point, they will want to own guns to defend themselves as Americans already can, due to our Second Amendment to the US Constitution. In America an attacking terrorist can be killed by armed civilians. It has happened already. The third link gives the details of an Islamic terrorist who beheaded a woman in an American workplace and was trying to kill a second worker when a company administrator killed the terrorist with a gun he kept on the premises. Who knows how many lives were saved because an Islamic terrorist was killed by an armed American civilian before his rampage could continue any further? Who knows how many Europeans whose lives were taken by Islamic terrorists would still be alive if European civilians could be armed like American civilians?

If these Islamic terrorist attacks continue inside Europe, at some point there will be an electoral revolution inside their nations and the current crop of elitist weaklings governing the European nations will be replaced by tough national leaders who will fight for their nations’ well-being and their citizens’ safety. Here in America, Hillary Clinton was nominated today by the Democratic Party as their nominee for president. She was a key leader in the Obama administration, and she is the candidate of the status quo. If she is elected, I cannot see that anything will change for the better here in the USA or the world for that matter. If Donald Trump is elected, he becomes the de facto leader of the western world. If that happens, a lot of things will change…fast. That just may happen. I won’t predict the future, but I have noticed that every national poll taken after the GOP convention ended shows Donald Trump leading Hillary Clinton. Islamic terrorism could lead to the wholesale replacement of the current weak western leaders with a new crop of nationalist leaders who have “had enough.” If this happens, world events will take a major change in direction…and how biblical prophecies will ultimately be fulfilled may surprise us all.