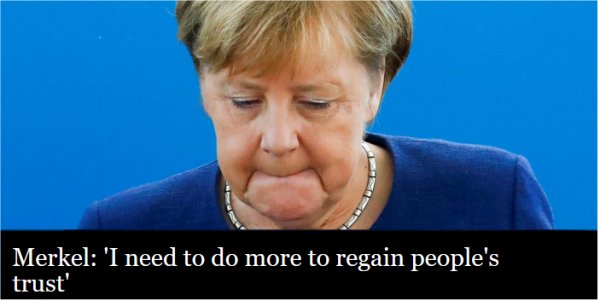 The very important Bavarian elections in Germany are now history, and the results strongly indicate that the reign of Angela Merkel over German and European politics is coming to an end. The Bavarian voters sent a very strong message by punishing the establishment parties that are in Angela Merkel’s governing coalition. They abandoned the conservative CSU party (the Bavarian ally of the CDU party of Ms. Merkel), but they also abandoned the leftist SPD party that is in the governing coalition with Merkel’s CDU party. The Bavarian voters flocked to several new parties in German politics, primarily the Green Party on the left and the AfD party on the right. When one looks at the actual results, there was very little change between the overall balance between the rightist parties and the leftist parties in Bavarian politics. The first link offers the actual results by, party, in the election, and the data is revealing.

The three conservative parties, the Christian Social Union, the Free Voters, and the Alternative for Germany (AfD) together amassed 59% of the overall vote. The four leftist parties, the Social Democrats, the Greens, the Liberals, and the Left, totaled 35.5% of the vote. A little over 5% went for smaller parties. When you measure the results vs. the previous Bavarian election, the conservative bloc gained 2.4% in its vote total, the leftist bloc gained 0.9%, and some smaller parties lost voters. When seen as right vs. left voting blocs, the conservative bloc gained a little in the election totals while the liberal bloc gained somewhat less. This election was clearly not about right vs. left in the political spectrum. The glaringly-obvious message of the election was that all parties allied to Angela Merkel, regardless of whether they were on the right or left side of the political spectrum, were heavily rejected by voter defections. The political parties that were outside Merkel’s governing coalition were handsomely rewarded by the voters. The message was clear: Angela Merkel’s leadership and her policies were rejected in the Bavarian election. There was no meaningful change in the left vs. right balance of the overall vote in this election.

The first link, second link and third link all report that the rejection of Angela Merkel was a central theme in this election and that this regional election will have a major impact on German national politics (which we will discuss later in this post). The CSU still won a decisive plurality of the vote in Bavaria, but they lost their long-standing outright majority, so they will need to form a coalition government in Bavaria. This may not be as easy at it looks. At first glance, the three conservative parties won almost 60% of the vote so they could easily form a conservative government. However, the CSU, Merkel’s ally, has taken the position that it will refuse to bring the AfD into any government. This means the CSU and Free Voters party will need a third coalition partner to form a government. The most likely partner would be the Free Democrats, a pro-business party, but will they have at least 5% of the final vote? It is my understanding they need that 5% of the official vote to be in the Bavarian Parliament at all. If they are not there, a leftist party will need to be invited into the coalition to form a governing majority. Bavaria is a very conservative German region. If the conservative CSU invites a leftist party to join it instead of the AfD, the CSU base will almost surely be horrified by the “betrayal” of the CSU’s leaders and will turn to the AfD in droves. On the other hand, if they invite the AfD into the governing coalition in Bavaria, it could topple Merkels’ national governing coalition as what remains of the shrinking SPD party may leave Merkel’s governing coalition at the national level. This would force new national elections, which Merkel is almost certain to lose. The shrinking voter support of all parties in Merkel’s governing coalition leaves them with no good choices in forming a Bavarian government.

I’d like to point out what I think is an obvious effort by the mainstream/leftist media to spin the Bavarian election results in a direction that is not accurate. In the third link, the headline of the Washington Post story, “Bavarian voters deliver a blow to Merkel’s allies,” was right on target. However, deep into the article is a quote from an analyst which states,”We’re looking at the slow fragmentation of Christian conservatism” [in Europe]. I think that is wishful thinking on the part of the leftist media, and I believe the results show the exact opposite to be true. As cited above, the conservative bloc actually increased its share of the overall vote in Bavaria. “Christian conservatism” is another way of saying “Christian-based nationalism.” That is strongly on the rise in Europe; it is not waning. The anti-EU nationalists that took power in Poland and Hungary have made it clear that they are determined to assert and protect the Christian heritage of Europe against the forces of secular/humanism and globalism that are being pushed hard by the EU, Germany’s Merkel and France’s Macron. The nationalists in Austria and Italy are in sympathy with the nationalists in Poland, Hungary, and Bavaria. Sweden’s recent election also rejected its secular/humanist, pro-EU government and it remains to be seen what form the final governing coalition will be there. Clearly, the Christian nationalists are ascendant in Europe. Bavarian voters are heavily Catholic Christians. The pro-EU globalists have been in steady decline.

On October 28, the German region of Hesse will hold its state elections. The latest poll for that election (as this post was written) is included in the fourth link. If that poll is indicative of the actual election results on October 28, Merkel’s coalition may not survive. It indicates another major loss of support for all parties in Merkel’s governing coalition and the expansion of voter support for parties, on both the left and right side of the political spectrum; which are not in Merkel’s coalition. Merkel’s party has a major internal meeting after the Hesse elections. If the CDU and SPD do as badly in the Hessian election as polls indicate, the leaders of the CDU may confront Merkel with an ultimatum: either resign for the good of the party or we will force you out in a no-confidence vote in the German parliament. Either way, new elections may have to be held in Germany. The SPD is sinking fast as a national political party of the left aligned with Merkel, and it may want to leave Merkel’s coalition to ensure its own survival. The CSU in Bavaria is sinking fast as a result of being allied with Merkel and the SPD. It is hard to see how this coalition can last much longer.

If Merkel’s coalition breaks up and she is removed from European politics, the agendas of the globalist EU will be in danger of collapse. The United Kingdom is leaving the EU via the Brexit process, Italy has rejected its former pro-EU leaders and has elected an anti-EU government, Sweden’s voters rejected its pro-EU government and its governmental future is murky. Merkel’s pro-EU government is hanging by a thread. Poland, Hungary, and Austria all have anti-EU governments. If Merkel’s’ wounded government falls, it will leave France’s Macron as the only pro-EU leader left in power in a major European nation…but Macron’s position is growing more precarious as well. The fifth link reports his approval rating, among French voters, has reached as low as 29%. His hold on power is also weakening.

The bottom line is that not only is Merkel’s government in Germany near collapse, but the EU itself may also be close to fragmentation. The sixth link offers an analysis that Italy is in the process of having a major confrontation with the EU over financial/budget matters. It includes the very strong assertion that Italy regards itself as a nation “occupied” by Germany and the EU Commission. If this situation is unresolvable, Italy may hold a national plebiscite on whether to leave both the EU and the Eurozone and return to the Italian Lira as its national currency. If Italy joins the UK in leaving the EU, expect a number of other European nations to also leave the EU. The nations of Europe may be about to escape the domination of Germany and the EU bureaucrats.

Be prepared for major changes in global geopolitics. The stresses that are tearing the EU apart are steadily growing more powerful. A breaking point will eventually be reached.

My thanks to a reader for sending me the sixth link.