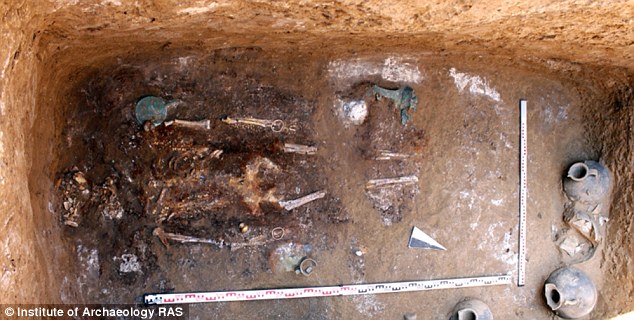 The first link and second link detail the remarkable discovery of an ancient burial site in modern Russia. The site was found in the Russian city of Rostov-on-Don, near the Sea of Azov, just north of the Black Sea. The ancient grave contained the remains and grave goods of a noblewoman of the Sarmatians, a people historically associated with the Scythian confederation of tribes. She was obviously of noble heritage as her grave contained gold adornments, jewelry and artifacts. The link relates that her grave was discovered in an undisturbed state while the grave of her apparent husband had previously been looted.

One of her grave goods is of particularly-striking importance. Indeed, it has “smoking-gun” importance. The link reports that she was buried with a “gem with a single-line Phoenician or early-Aramaic inscription.” Both the first two links show this gem and inscription, but the second link’s photo is larger and easier to read. Any reader who can read ancient Phoenician/Aramaic may be able to read the inscription on the gem. Those who have read my books know that the linguistic term, “Phoenician,” describes the alliance of the northern ten tribes of Israel of the kingdom of Israel with the much-smaller city-states of Tyre, Sidon, etc. This alliance began during the reign of King David (II Samuel 5:11-12) and flourished in the reign of King Solomon as well (I Kings 5 and 9:26-27). After the tribes of Israel split into a northern and southern kingdom, the northern kingdom became very closely allied to the Phoenician city-states and their royal houses intermarried. Jezebel, the wicked wife of King Ahab of Israel, was a Sidonian princess (I Kings 16:31). The “Phoenician” alliance of Israel’s tribes and the smaller city-states was a world power for centuries, and it was the dominant global maritime/naval power for much of that time. The minimalist historical viewpoint that the Israelites were an obscure shepherd-kingdom is incorrect. They were a world power!

My books detail and document the migrations of the ten tribes of Israel out of the old Holy Land into Asia, Northern Africa, Europe, etc. They did not all go into an Assyrian captivity, but they did all go into exile (II Kings 17:18). Historical records (cited in my books) document that a large mass of the ten tribes of Israel migrated to the Black Sea region and became known to the Greeks as Scythians or Sacae, and, later, to the Roman as the Goths. The apocryphal book of II Esdras (13:40-45) records that this large mass of migrating Israelites evaded the captivity that many of their fellow Israelites succumbed to in the final Assyrian invasion. They migrated to a region called Arzareth, which has historically been linked to the Black Sea region. The II Esdras account even relates that God was with them and supernaturally helped them to make this migration to the Black Sea region. II Esdras13:43 states that the migrating Israelites went through the region of the “narrow passages of the Euphrates River” on this flight from the Assyrians. This language about the “narrow” part of the Euphrates River strongly infers that the Israelites were migrating via the headwaters or sources of the Euphrates River where the Euphrates River would logically be narrow. This would place them in the region of modern Eastern Turkey heading northward from the Holy Land toward the Caucasus Mountains and the Black Sea region. My books contain vast amounts of information about the Scythians or “Sacae,” as the Greeks often called them. The name, Sacae, preserves the name of the Israelite progenitor, Isaac, whose name was prophesied to be placed on the Israelite tribes throughout history (Genesis 21:12). The II Esdras account adds that the migration to the new Black Sea homeland for this mass of the ten tribes of Israel took a year and a half–a reasonable length of time for a large mass of people migrating with women and children, elderly, etc. A British government official under Queen Victoria, Col. J.C. Gawler, whose work is cited in my books, wrote that this large body of migrating Israelites on their way to the Black Sea region was escorted by 220,000 armed soldiers. Given that size of fighting-age males, this migrating mass surely numbered well over one million Israelites.

The Sarmatians are sometimes regarded as a Scythian/Sacae off-shoot tribe. The Sarmatians are described as “fire-worshipers” in the first two links, and they seem to have had a mixture of vestigial Israelite religious practices and traditions mixed with pagan concepts. The links also speculate that the buried female Sarmatian was an “Amazon” warrior due to the military nature of many of the artifacts interred with her. The third link is one I found searching the Internet. Besides containing information about the Sarmatians and their possible use of “Amazon” female” warriors, it includes a great deal of information about the migrations of the ten tribes of Israel into Asia, and later, into Europe. It cites some sources which I also cite in my books and, while I agree with much of the information it offers regarding Israelite migrations, there are some points of disagreement. It includes some excellent artwork associated with the Israelite migrations: the “pointed-hat” (miter) headgear of Israelite leaders, priests and warriors and the chain-mail armor of Israelite/Scythian/Sarmatian warriors. The Bible records that Israelites and their enemies of the biblical period had armor, chain mail, etc. for their warriors, much as did the Medieval armies of Europe. Judah’s king, Uzziah, apparently equipped his entire army with “coats of mail” (see marginal reference in some KJV Bibles), although the KJV uses the archaic word, “habergeons,” to describe them. You can look up the word, “armour” or “armor” in your concordance and see how often this word is used in the Bible. The Israelite tribes that did go into Assyrian captivity eventually rose up to conquer their old captors: the Assyrians, The Babylonians and Medo-Persians, and they founded the Parthian Empire–fulfilling the specific prophecy in Isaiah 14:2. The Parthians and Scythians are known to historians as brother tribes who came from a common origin, and the Parthians were well known to field warriors with armor and coats of mail. The Romans particularly feared the Parthian heavy cavalry, which had both horseman and mount clad with armor as they went into battle.

The Israelite kingdoms of Israel and Judah, along with their Mesopotamian enemies, had armies with weaponry and chain-mail armor as did Medieval Europe. Medieval Europe had fortified castles and the ancient Israelite world has walled cities, although the KJV of the Bible uses the term “castles” to describe the ancient Israelite walled cities (II Chronicles 17:12 and 27:4). Their ancient world also included “engines; which could hurl large stones and either large or massed arrows (or both), as II Chronicles 26:15 records. This means ancient Israelite kingdoms were familiar with and employed what the Medieval world would call trebuchets and ballistas. This type of warfare also characterized the Roman-Parthian wars. To gain a flavor of the ancient Israelite/Sarmatian and Scythian and Parthian armored knights and cavalry, you can watch the movie, King Arthur, starring Clive Owen and Keira Knightley. It depicts a group of Samaritan knights from the Black Sea region fighting as mercenaries in Roman Briton during the waning days of Rome’s presence in that island.

The third link has an unusual presentation of its text which alternates between bold-faced and unemphasized words. It is visually jarring, but the information in the link includes much good material which is consistent with a much-abbreviated version of the content of my books. I do have some differences with its identifications of modern Israelite tribes with modern nations, but I mostly agree with them. A key point of agreement is the linkage of the USA and the British nations to the Israelite tribes of Manasseh and Ephraim, respectively. One point of disagreement is its identification of Switzerland as the modern Israelite tribe of Gad. I would agree that Gadites are in Switzerland, but I include the modern nation of Germany as constituting the modern tribe of Gad as well. Much of Switzerland speaks German and is of German ancestry, so it is no great leap to identify Germany (and Germans) as Gad. The prophecy in Genesis 49:19 concerning the Israelite tribe of Gad in the latter-days does not fit Switzerland at all, but it is “spot on” for Germany. Gad, in the latter days, will be a tribe/nation that is “overcome by a troop” (an armed force), but rises during the latter-days to renewed prominence. This describes post-world War II Germany with uncanny accuracy. The third link also includes a closing segment on the “Georgia guidestones,” a topic my books do not address. Nevertheless, the third link contains much material that you will find interesting. If the subject matter whets your appetite for more historical information about the ten tribes’ migrations, I urge you to order my books, available at my website’s home page, as they contain much more information than is contained in the article in the third link.

Back to the archaeological discovery. The gem with a Phoenician/Aramaic inscription cements the ties between the Sarmatian/Scythians and the ancient Israelites, and confirms the origin of the Sarmatians/Scythians was in ancient Israel’s kingdoms, not from somewhere deep in Asia. The presence of this ancient Phoenician-inscribed gem in the Sarmatian burial site indicates that it had great familial and historical significance to whoever was buried in that grave. It affirms the ancient roots of that buried female were known to be in the Phoenician/Aramaic world. No group from deep in Asia or Mongolia had any Phoenician/Aramaic roots or valued heritage. This artifact and burial site confirms the Israelite origins of the Sarmatian/Scythian tribes.

My thanks to a friend who alerted me to one of the first two links about this archaeological discovery.