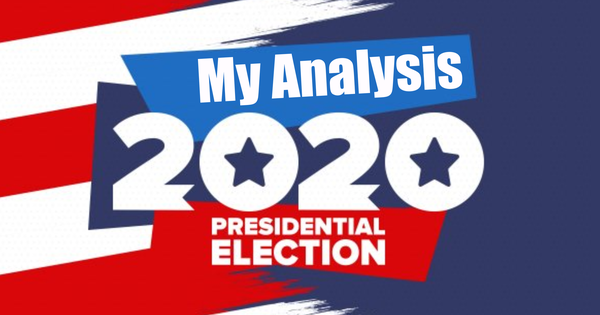 Given the national and international importance of the US presidential election, this post will offer my analysis of the race. Because the media coverage of the race is overwhelmingly dominated by the Leftist media who hate Trump, many readers may have a false view of what is actually happening in the campaign. Allow me to begin by asking you a question: Given that the mainstream Leftist media has not told the truth about the attempted coup against Trump via the phony Russian interference charge, the phony evidence presented to a FISA court to conduct the bogus investigation, the phony impeachment trial, etc, should we expect the Leftist media to suddenly tell the truth in their polling about the current race? Obviously, the answer is “no,” and the evidence confirms they are not telling the truth.

An example of the Leftist coverage is the first link, a story about the race from the Bloomberg network (named after Michael Bloomberg–who ran against Trump in the Democratic primaries). As you can see, this Leftist media story is virtually an obituary for the Trump campaign. It is wishful thinking by the Left. More wishful thinking by the Left is displayed at the RealClearPolitics composite polls, which are merely an average of the Leftist Trump-hating polls. The bias is so strong that even the Biden campaign felt the need to admit the Leftist polls showing a huge Biden lead are not accurate (second link).

What we are seeing is a repeat of the 2016 race when the Leftist media had Hillary Clinton easily, defeating Trump with the Washington Post famously declaring Trump had no path to victory in the Electoral College. The 2016 Leftist media predictions were all wrong. In 2016, one pollster accurately predicted Trump would win–The Trafalgar Group, an independent polling company. Since your media is almost certain to not tell you what this accurate pollster is forecasting for the 2020 race, I will give you that information in this post. The third link examines The Trafalgar Group‘s poll predictions, which argue that Trump will win re-election in a few days’ time. I urge you to go to their website, thetrafalgargroup.org, to check out the polls and predictions which they have released for public information. Contrary to what the biased Leftist polls assert, the Trafalgar polls have Trump ahead by varying small amounts in the battleground states of Arizona, Wisconsin, Michigan, Ohio, North Carolina, and Florida as well as far ahead in conservative states such as Louisiana, Missouri, and Texas. Biden is ahead by small amounts in Pennsylvania and Minnesota. Their polls also show the Republican candidate for Senate in Michigan maintaining a small lead over the Democratic incumbent. If the Republicans defeat Democratic incumbents in Alabama and Michigan, it will make it very hard for the Democrats to take the US Senate.

Other polls indicate that Trump is in the lead or in a good position to win re-election. A poll asking whether people think their neighbors will vote for Trump or Biden indicated a lead of 11%  for President Trump over Biden (fourth link). The fifth link details another national poll that Trump has risen from an 8% deficit to only a 2.7% deficit in a matter of weeks. The sixth link is quite extraordinary. It cites a poll asking voters whether they are better off now than four years ago (before Trump took office) and it revealed a huge margin of support for Trump’s performance. By a landslide 56-32% margin, voters responded they were better off now after four years of the Trump presidency than they were when Obama left office. In all other election cycles, such a landslide preference for the incumbent president’s job performance would indicate a landslide victory for the incumbent president was imminent. How can these poll results be so opposite of the Leftist mainstream polls? One factor could be the “shy Trump” factor. The seventh link explains this factor, which means that a significant percentage of voters are afraid to tell Leftist/Democrat pollsters that they are going to vote for Trump as they fear their names will be put on some list kept by the Democrat media. It cites this factor existed in the 2016 election as well. It notes that Wisconsin had a 5% lead for Hillary Clinton before election day, but Trump won the state by 1%. In 2016, the “shy Trump” factor was 6% of the electorate in Wisconsin. If it is anything that large again in 2020 in a variety of states, many states the Democrats expect to win will vote for Trump instead.

A major problem in this year’s election could be the issue of fraudulent mail-in or absentee ballots. The eighth through the fifteenth links reveal the many ballot schemes via which the Democrats could steal the election in a variety of states. There are even reports of mail-carriers throwing away ballots, efforts to get late votes accepted beyond legal deadlines, etc. One egregious vote-stealing scheme by the Democrats was discovered in Texas, where Democratic campaign officials conspired with elected officials to “harvest” large numbers of fraudulent ballots to inflate Biden’s totals on election day. Another link asserts that in 353 counties across America, the aggregate number of “registered voters” exceeded the number of actual residents by 1.8 million! This is a factual impossibility and it shows there is a minimum of 1.8 million phony voters in those counties–many of whom likely received mail-in ballots. The potential for fraud in those counties is immense.

One last point. One factor in elections is the “enthusiasm factor” for both sides. Even after having the coronavirus, Trump recovered quickly and has been conducting rallies at an incredible pace. Trump’s ability to draw immense crowds with short notice is legendary. On the other hand, Biden barely has a campaign. He leaves his “basement” only occasionally and is prone to gaffes and so many cognitive confusions that he has the charisma of wilted lettuce. Think I’m exaggerating? The final link reports that a scheduled rally for the Biden-Harris ticket held in Arizona drew no one to the rally! The only people reported as being there were media people and Biden’s own campaign staff.

Trump’s support is very deep within his base and his supporters will turn out with intense enthusiasm on election day. Candidates like Biden with low enthusiasm levels among their supporters will have a larger percentage of them stay home on election day. In summation, I agree with the above link that indicated that Trump is likely to win. However, the mail-in votes and the fraud factors could clearly cause a lot of lawsuits where the courts could decide elections in some states. So much is at stake. A Trump win will further the USA’s “America First” stance while a Biden win will cause the USA to descend into socialism and censorship of traditional views. It could get ugly either way as the losing side will have many adherents who will not accept the result. We will soon know whether the election settles things in the USA or creates even greater divisiveness than we already have.

I urge all Americans, reading this post to be sure and vote on Election Day! The nations’ future really is at stake.